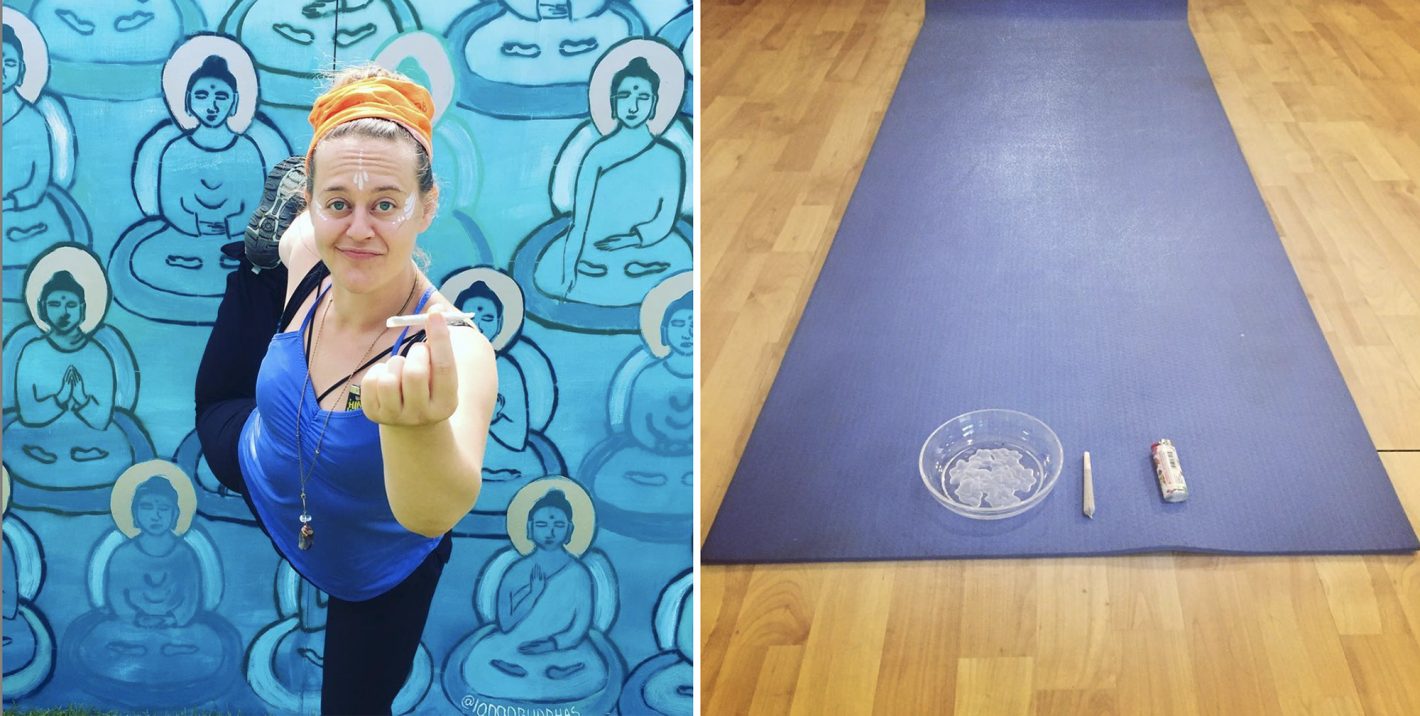 Peanut butter and jelly. Cigarettes and coffee. Middle-aged white people and the Nextdoor app. All natural and organic pairings that complement each other nicely. The only other element necessary was the imagination to put them together.

But cannabis and yoga? It might sound like a stretch. I tried it on my own once, back before yoga was legal. Took a hit, grabbed my mat and walked in on a class. I thought I would have some sort of epiphany or moment of enlightenment, but the problem was I’m not particularly good at either one—I’m a lightweight in weed and a heavyweight in yoga, the opposite of ideal. One time I smoked some weed and thought I was seeing double, but then I realized I was so high I had put both my contacts in the same eye. So when I attempted to do both at the same time, I just ended up spending a lot of time doing exercises in the wrong direction, trying to avoid the instructor’s glare that said, “Weird flex, but OK.”

When I first heard about Syoga, a “cannabis-enhanced” yoga class at Hot Pot Studios, I was apprehensive. For anyone prone to social anxiety, it sounded like the scariest possible combination—getting stoned in front of people, and exercising in front of people. But when everyone is doing it, the fears just kind of … cancel each other out. Turns out it’s hard to be embarrassed when you’re already embarrassed! There are breaks, and snacks, and everyone is on the floor. Your brain isn’t super sharp. It’s like kindergarten in a lot of ways. The smell of herb even helps mask any yoga-related odors that might emerge.

But make no mistake, this is a legit yoga class. We did all the moves I knew, and several I didn’t. We did a grueling ab workout. We did deep stretches. By the end I was sweaty, sore and very stoned. When the class concluded, I laid in Shavasana, my mind and body completely relaxed. I had achieved the feeling I was searching for some years ago. I was Warrior One with the universe. 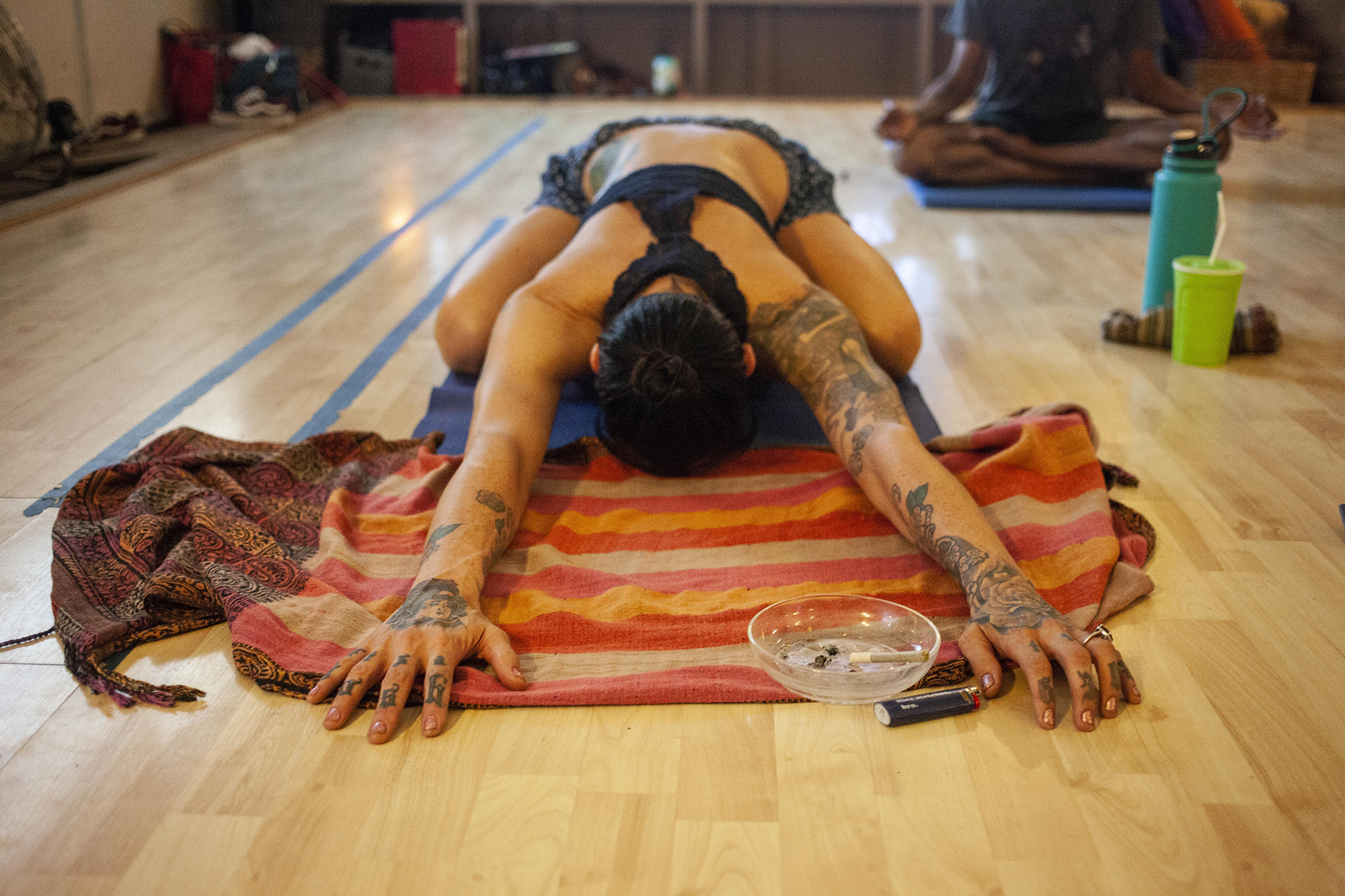 It turns out for any proper spiritual journey, you need a great guide. That’s where Syoga sensei Katy Karns comes in. It is Karns’ particular warmth, knowledge and insight that drive Syoga, all of which she developed along her own journey.

Though Syoga has been around for fewer than six months, the idea has been brewing in Karns’ brain since she started practicing yoga seven years ago. “Yoga is how I changed my body. I was very unhealthy,” Karns admits.

Getting started was the most difficult part.

“Yoga is hard. It’s so much self-discipline,” Karns says.

Since her first ever smoke sesh with high school friends at 16, Karns discovered she could use marijuana to combat her negative thoughts.

“I realized I don’t have to feel the way I feel all the time,” she recollects.

Karns used this as a tool to get over the hump her first time doing yoga.

“The only way I could get started was to be a little high,” she says. “I would just smoke in my car and walk into this room. And I felt judged about it. But so many people were doing the same thing.”

Soon after building up a healthy yoga habit, she had shed 60 pounds, and even grown an inch due to improved posture. Her interest in the body grew as well, and Karns decided to get her certificate in neuromuscular therapy.

“So I could legally tell people to stretch,” Karns jokes.

Neuromuscular therapy took its toll on her body, however. At one point she was too injured to do any more body work for others.

“That’s when I quit my job, moved into a bus and started doing yoga all the time,” Karns explains.

Through yoga, she was able to heal her body and also gained the confidence to teach yoga on her own. She taught a couple of yoga classes (“non-high classes”) privately, and then got her Ganja yoga certificate from Dee Dussault, author of the aptly named Ganja Yoga. From there, she began formulating a plan to bring her idea to reality.

When Hot Pot Studios first gave her the green light for Syoga, Karns was extremely nervous. Fortunately, her various skills and life experiences aided her in the endeavor. 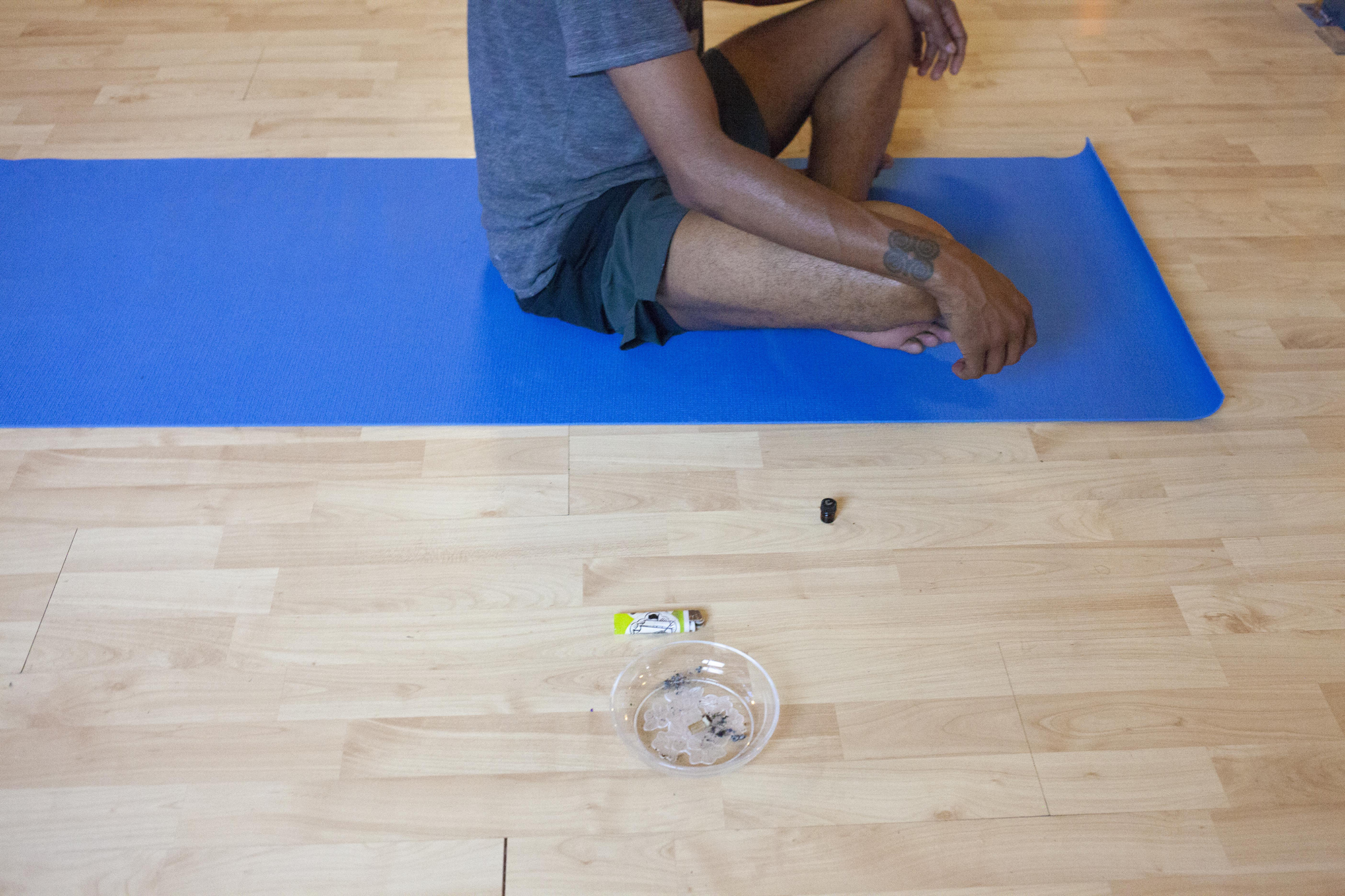 “I’m using everything I got to do this,” she says, and that covers quite a bit of ground. Karns also has her own photography side-business, performs burlesque and does stand-up comedy—in addition to her day job as an event coordinator. She’s been able to draw on each of these in one way or another—photography for doing her own marketing, burlesque for building body positivity, stand up for confidence in leading the class.

“And I really fucking like it,” Karns says of Syoga. “It’s so much fun.”

But not everything has been easy. Cannabis may be legal, but regulations around marijuana-related business can get sticky.

“No one wants to be the first people to test the boundaries with legal status,” explains Karns. “We can sell it and consume it, but only at our house. No lounges or events.”

Besides public consumption laws, companies like Google and Facebook make it tricky to advertise on their platforms. Even the name “Syoga”—a shortening of “stoned yoga”—is intended to be inconspicuous. Municipalities continue to act as gatekeepers at the local level. While West Hollywood is set to open cannabis cafes and lounges as soon as 2019, it remains to be seen if other cities will follow suit. The tide is turning, but time means money.

Here in Sacramento, Karns aims to create a culture of collaboration and community around cannabis yoga classes.

“I don’t want to be the only one doing this,” she maintains.

With others help, Karns wants to dismantle the stoner stereotype and replace it with a healthier and more accurate one.

In the meantime, Karns’ next step is taking Syoga to tech companies, and on the road to states with friendlier legislation, like Colorado. She also hopes to package her yoga and therapy skills together to create wellness retreats which are financially accessible to the people who need them most.

Karns believes greater accessibility will lead to greater acceptance of cannabis-enhanced yoga as a concept, and a healthier view of cannabis itself. 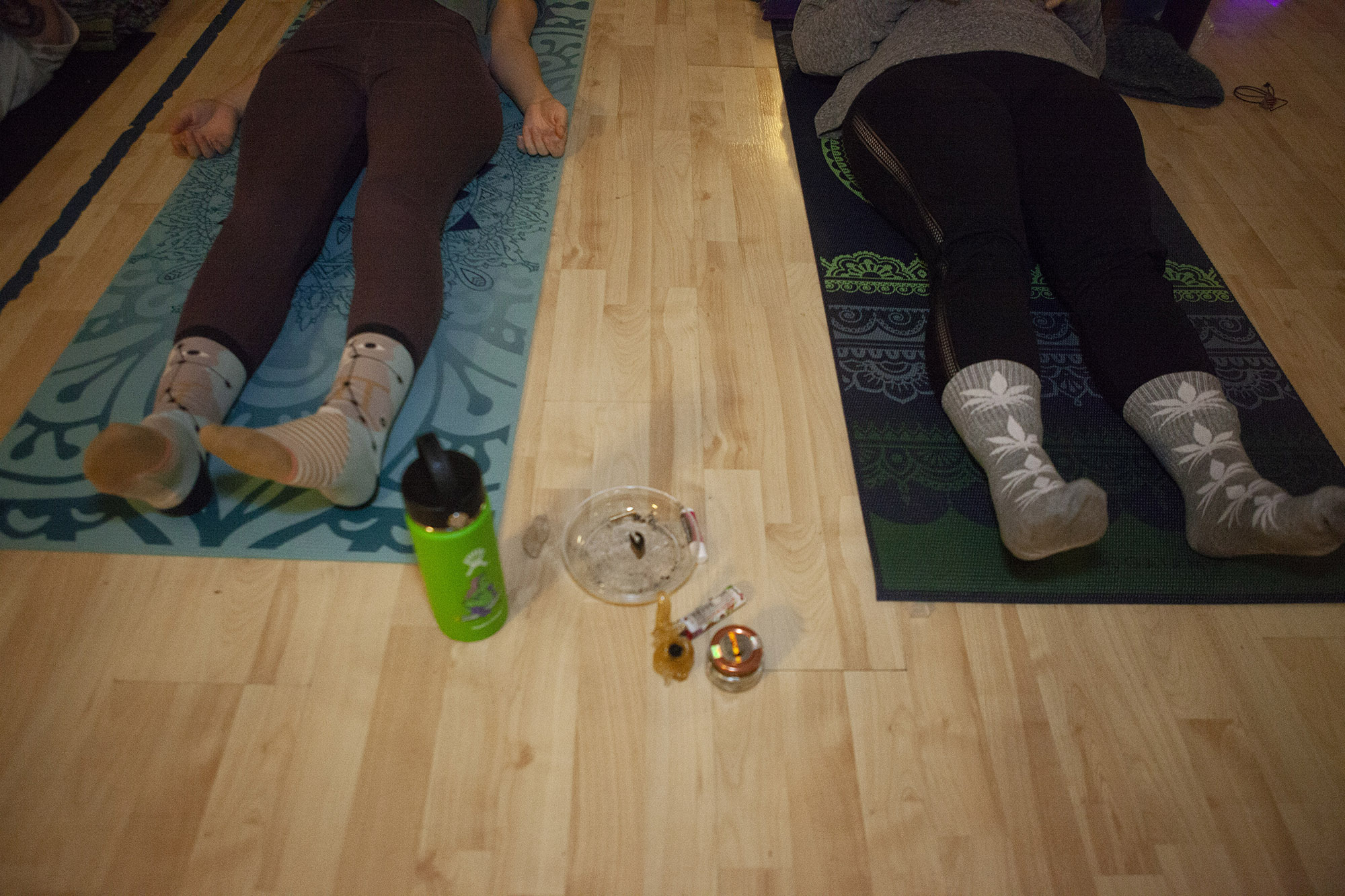