Fresh Start, but Forever in First

To Bay Area rap fans, the frontman for 1st Place may look familiar. A few years back he went by the name Stresmatic, onethird of the group The Federation. Infamously known for their hit song “Hyphy,” and the ensuing, now-classic, self-titled debut, The Federation were a heavy force behind the Bay Area renaissance of the mid-‘00s. Deals with Virgin Records and later Warner Brothers put them on the national stage, and while the Hyphy movement as a whole didn’t take off, the group left an undeniable mark on hiphop. While still family, each member of The Federation embarked on solo ventures, and thus 1st Place was born.

When he came back to Northern California after a stint in Los Angeles, Stresmatic, now known as TJ, linked with his childhood friend and producer Kyle Murphy (aka Dirty Beats) and got back to work. The friends from Fairfield, Calif., began working at a dizzying pace, experimenting and developing a sound to call their own. It was a fresh start, a chance to change and do something different, and most importantly do it all on their own. Since 2007 the group has put out over a dozen albums; a mix of produced and programmed beats, to some projects backed up by a live band. The party vibe carried over from The Federation days, but recording independently (both as an artist and from a record label) opened up the avenues for expression, allowing TJ to be more candid and self-aware.

Though he’s at peace creating what might be considered alt-rap, TJ keeps one foot in the mainstream world. A writer at his core, he has made a career of crafting hooks for heavyweights such as E-40, Lil Jon, Snoop and Ghostface. His gift for stringing words together into phrases that stick to the brain is prevalent in the hook-heavy 1st Place sound, and ensures that if nothing else, you won’t forget them. In the following interview, TJ speaks about some of his earlier music influences, reflects on his time with The Federation and admits that sometimes his music with 1st Place can be a bit too honest. 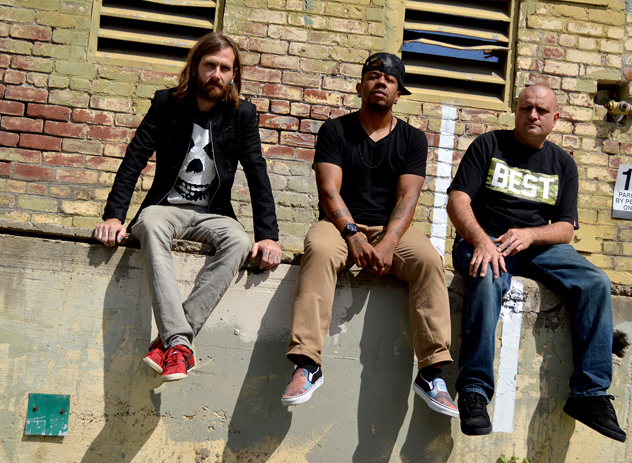 What were some of your earliest encounters with music and how do you think it shaped where you’re at today?
I remember the first concert I went to was this Live 105 concert in Golden Gate Park with this group Crowded House. They played this acoustic set, and that right there made me want to do music. I saw the attention they were getting, and I said to myself I want to do that. But growing up I listened to a lot of Bay Area rap, hella Tribe Called Quest and Redman, but I had an uncle who listened to all the New Wave stuff and groups like The Smiths. It sounds weird, but I listen to more of that stuff than I do rap these days. I love how it sounds. Now music sounds too perfect. That music sounds dirty, like it was recorded on a four-track or something. It’s just gives me a feeling that I don’t get from anything else. People see me walking, thinking I’m probably listening to 2Pac, but I’m probably listening to Depeche Mode.

So did you start off rapping or did you ever try to put together a band?
My friend Kyle, who does a lot of the 1st Place beats, his dad had this guitar and I would always tell him that we should start a band. This was probably like fourth grade. I was always over there messing with it, and his dad would get mad because I was constantly playing it. Nothing ever happened, but I’d say around high school is when I started rapping a lot. There were these battles at this store in Fairfield called the Fonky Chicken, and I was winning all of them. That’s where I met Rick Rock and Doonie Baby [of the Federation]. They had their thing going with Cosmic Slop. Rick had already done stuff with dudes like 2Pac and stuff so it was crazy. I stayed in contact over the years, and eventually just by being around and in the studio, we started a group.

I understand you were also heavily into bikes and racing as a kid too, is that right?
One of the first things I did when I got my advance for the first Federation record was go to Ray’s Cycle in Fairfield [laughs]. I spent a lot of money at Ray’s Cycle. I probably kept the lights on for a while around that time. But yeah, from the time I was 10 to about 16 I was deep into downhill mountain bike racing. I raced all around California: Big Bear, Mammoth, Squaw Valley. It costs so much money to do, so that didn’t work in the long run, so I cut that out and really started getting into battling. It went from bikes to battling, just like that.

What did you take from your time with the Federation?
That experience did affect how I conduct my business some. You can’t wait on anybody or anything, so now I’m back on a do everything yourself mentality.

Did you ever think about stopping?
Oh hell no! I was down in L.A. at the time, and I was still getting into the studio and writing hooks. I was just recording, not really thinking about my own project, but when I came back up to Northern California that all changed. My boy Kyle had a studio in his house so I started recording every day and focusing on me. But no way, I never thought about giving up, that is not in me.

I think one of the things that attracts people to 1st Place is the honesty, like nothing is glossed up and you take on this very normal dude approach to the songs.
Yeah, and sometimes it might be too honest. It’s very straight to the point. I actually don’t like to play my music for chicks I’m messing with; it makes them ask questions [laughs]. And you know, sometimes I say some stuff, and people think it’s funny, but I’m being serious. Like people think “Being Broke Sucks” is funny, but I’m dead serious with that song. It might seem funny because of how I say things, but I’m speaking from a real place. I’m not trying to be like Weird Al or anything, and just say something stupid to get a laugh. And with that, I don’t have a Rolls Royce or nine chains. That’s cool if you have that, but the average American doesn’t live like that. I’m trying to connect to the people who can relate to that.

With 1st Place you’ve also seemed to simplify things, what was the thinking behind that?
I stopped worrying about rap stuff. I know I can rap. I’m not the best rapper in the world, and I’m totally OK with that. The less I worry about trying to be the dopest rapper, the more people like it. I care about the art, but I stopped caring what grown dudes think. Like I don’t want dudes to tell me how dope I am anymore. I would rather have girls say they had fun. It’s cool for dudes to love my music, but I just don’t want dudes in the corner getting all hung up on what I said.

Just following you on social media you have really taken to a healthy lifestyle, and have even stopped drinking. Has this affected your music at all?
Well I still write about a lot of the same things; girls, drinking and drinking with girls, because I have done so much of that, but performing is way different sober. You can see clear, and when everybody is staring at you it’s more a little scarier than when you are drunk out of your mind.

Rocking with a full band you can catch 1st Place at Blue Lamp on April 19 alongside Gurp City’s own Z-Man. The show starts at 8 p.m., and the cover charge will be $10. For more information, go to Bluelampsacramento.com.