G. Green was once the most unpopular band in Sacramento. Originally Andrew Henderson’s bedroom recordings moniker, his solo shows in Sacramento garnered anathema of clandestine ridicule and indifference. There was a time I loathed seeing the name listed on every Hub show and house party, and I wasn’t alone. It was fun to smear G. Green in 2009 and it was excruciating to see them on the verge of amateurish implosion in 2011. Most of you probably still assume G. Green is locked into a static identity as Midtown brats, drunk on youth, and too drunk to do much besides be obnoxiously loud. While we were laughing, when we stopped caring and stopped looking, G. Green quietly became a serviceable indie band, writing songs destined to shed the onus of snotnosed bush leaguers.

Before she became G. Green’s drummer, Liz Liles described the first G. Green show (a one-off lineup consisting of Henderson on guitar and promoter Rick Ele on drums) as horrible and a disservice to the former KDVS DJ’s sterling reputation.

“I thought ‘why is DJ Rick playing with this idiot,’” she said. “Me and whoever I was with, we watched one song and then went into the alley to smoke cigarettes.”

In the greenhorn years of the band, Henderson was the perpetual opener; the sort that would clear a venue, living room or DIY space except for his steadfast cheerleader, DJ Rick.

“I put him in front of audiences, and the awkwardness, the house slippers on his feet, and the most piercing moments of singing were initially a big turnoff to people,” Ele said. “But Andrew seemed totally impervious to disapproval.”

*****
They’re all laughing at you, aka the infamous Capital Bowl show

Mt. St. Mtn. founder and former Mayyors member Mark Kaiser put out G. Green’s first record, Crap Culture, in 2012, but it took time for him to become a backer. In gathering stories of infamous G. Green failures, Kaiser and Liles invoked the West Sacramento Capital Bowl show in 2008 without hesitation. In those days, bands would rent out the events room to play, and according to Kaiser, “trash.” The bill was geared toward trashing the place with Mayyors and Eat Skull (a notoriously self-destructive Portland band), while the G. Green solo set was the black sheep. Liles said she and her friends openly ridiculed the G. Green set. While Kaiser likened the clumsy solo performance as arriving “too late for that mid-’90s Olympia-wrought ‘any art is good art’ vibe.” Henderson was not going to be the next Calvin Johnson.

“Andrew was really young, and looked really drunk and really nervous,” Kaiser said. “He let loose, and I cringed. The show was fun, drunken chaos, all the bands on the bills were renowned for being a wasted mess, but this was excruciating.”

Liles might have mocked Henderson at first, but one evening he showed up at her Midtown home, then known as the Funcastle, expecting a Thee Oh Sees show. Liles had moved the show to another venue, but the encounter with Henderson sparked a quick friendship. At the time Liles was a—quote, unquote—drummer for experimental groups Sucks and Fatty Acid. Untrained and illiterate to tempo, she began telling Henderson she was G. Green’s new drummer.

Henderson obliged after booking a house show with Kurt Vile, Eat Skull and Ganglians. He had two months to put together an opening band; Liles was the first piece. The remaining guitar parts were filled out by Julian Elorduy (drummer for Mayyors in those days) and Dylan Craver. Two months proved enough and sustained the approval of scene-dad DJ Rick.

“I didn’t really know if the band would continue after that one show,” Henderson said. “Rick loved us and threw us on all these shows and put us on [Operation Restore Maximum Freedom]. Pretty much the reason Liz and I still play music together is because Rick threw us into the whirlwind of the Sacramento music scene at that time.”

Kaiser recalls being at the full lineup’s debut, despite purposely steering clear of solo sets since the bowling alley incident.

“The second time I saw Andrew play it was with this first incarnation of a live band and it was a world of difference,” he said. “It was sloppy and chaotic, but it was fun and there were lots of ‘whoa, if they keep doing that’ moments that had me intrigued.”

Henderson and Liles cherish the times with that early incarnation, but also knew it could never last. Elorduy quit the band after Liles broke up with him for Hella drummer Zach Hill, and was replaced by Brittney Gray on bass. Henderson and Craver were the best of friends and also prone to volatile feuds. Every show and practice was a fun, drunken gathering that flirted with implosion.

“We were so close as friends that none of it mattered if people liked us,” Henderson said. “We were just getting drunk and having fun. Me and Dylan were good friends and then we’d hate each other. He probably quit the band infinity times.”

Before the final nail was put in the original lineup, G. Green enlisted Andy Morin, long before his stint in Death Grips, to record their debut, Crap Culture. A shambolic and lo-fi collection of mad-dash punk songs, Crap Culture captured G. Green at the time—unruly and unpolished, but beneath the caterwaul existed nuggets of pop punk gold. Kaiser compared the record to Superchunk’s No Pocky For Kitty, lauding G. Green for maintaining their live energy on record.

“‘Pool Of Blood’ was the song that made me offer them a record,” he said. “That song was a sign they had something and were capable of growing past the kiddish fun-punk into something bigger.”

Crap Culture arrived late to the cultural trend of low-budget to no-budget albums, home-recorded on junkable equipment. It was recorded in 2010, but did not see release until August 2012. By then contemporaries like Wavves had ditched the intelligible scuzz for pop-punk polished for MTV. Also, by the release of Crap Culture on Mt. St. Mtn., G. Green featured a lineup far superior to the rag-tag group that winged it through the debut.

With replacements Simi Sohota on bass and Mike Morales on guitar, G. Green returned to the studio, paying Robby Moncrieff to record a follow-up at the Hangar. Besides being a friend of the band, Moncrieff was a popular choice having recorded Dirty Projector’s critically praised Bitte Orca and fellow Sacramento band Ganglians’ Still Living. Unfortunately Henderson said the band made the mistake of requesting Moncrieff “make it sound like Woodhouse,” meaning Chris Woodhouse, the Hangar engineer responsible for seminal linchpins like all eight Thee Oh Sees records and the A Frames.

Henderson said, “We didn’t use Robby as he should be used as an engineer. He did the best he could, but it’s not the way Robby works. There was no unifying theme with it. It was just a smathering of shit and it didn’t sound very good.”

The record was scrapped, except for two songs which became the “Funny Insurance” b/w “Sounds Famous” 7-inch. Liles corroborated their poor performance, attributing it less to Moncrieff, and more to the band for it sucking. They entered the studio with songs written by all the members with no vision for the band’s identity. 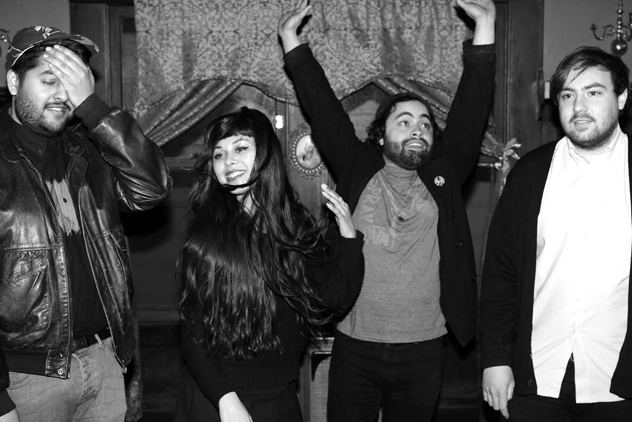 With no beer to drink and no cigarettes to smoke outside, I remained inside conceding that despite my efforts I’d been hoodwinked into a G. Green set. Now, I don’t recall particular songs from the set in that blazing, claustrophobic bike shop, but I do know that’s the night I stopped laughing at G. Green. The additions of Sohota and Morales gave them chops previously lacking in the dynamic. Liles had become a force, and Henderson’s once pubescent screech had caked enough nicotine on his vocal cords for a second lease on his balls dropping. There’s plenty to love about a band bent on belligerence, but when that same band backs it up with the skills to earn that abandon, they stop being local brats and graduate into a menace worthy of unleashing on the country at large.

This year on the porch of Kupros I confess to the founding members the Parquet Courts show is when I started believing in G. Green. Henderson states it was his birthday that night, while Liles mentions that Parquet Courts opened for them when they played Brooklyn’s storied 285 Kent venue. Both are unphased that I once detested their band. I was never the only one and I wasn’t the only convert either.

Liles said, “A lot of people probably haven’t been taking the time to see us lately because they saw us so many times three years ago and have decided there’s no way we’ve actually progressed.”

Henderson added, “There’s an image that probably still exists in a lot of people’s minds of these weird shitty kids that are drunk all the time and looking for the next party. We’re convincing people who’ve seen it from the beginning that we’re a great band now.”

Liles and Henderson turned 25 this year. Neither member wanted to be pigeonholed to perceptions developed when they were still teenagers. The upcoming Area Codes album was honed on tour, the band delegating a set it would play nightly until the songs were ingrained in their muscle memory. The decision to be professional and treat their live set with care translates to the album, which was recorded by Woodhouse, whose specialty is live tracking, room sound and mic placement. Even a late night of binging on spirits and karaoke at the Distillery couldn’t sandbag their comfort with the songs.

“We finally developed a sound that cut any bullshit,” Henderson said. “We didn’t really know how to make a band sound. In recording with Chris, he just documents what we’re doing.”

But is their scene-dad Rick Ele a proud papa?

“So many Chris Woodhouse productions have that unmistakable Woodhouse touch,” Ele said. “He becomes the fifth Beatle to so many bands, but in the case of Area Codes, I think he really just used his magic to maximize the G. Greenness of this record.”

Kaiser was equally impressed, keeping the band on his Mt. St. Mtn. roster for a second go-round, calling their current incarnation a “quick progression.”

“The new lineup came about and they tightened up both their live presence and song writing. I kept telling Andrew to just pony up the money and record with Woodhouse. He’s the wizard, he knows their sound and knows how to make them sound more like themselves. That’s what they did and this new recording is a huge step forward.”

The night at Kupros we drank enough short-n-talls of Coors Light and Jameson to carry the festivities to the former Funcastle, now also the home of Henderson. I apparently needed to try “tangler,” a moonshine-like infusion engineered by Liz’s boyfriend. Once there it was filmed and failed beer shotguns for the tour promo video, messy blueberry pancakes, and Guided By Voices’ Alien Lanes on the record player. As both made more of a mess than a mouthful in shotgunning the PBRs, I wondered how they ever got the stigma of a party band. Earlier that night Liles insisted they were misunderstood. “We’re not a party punk band, we’re a weird band,” she said. “The record only mentions pizza once!”

“We’re a straight up indie rock band now,” she said.

Most importantly are these last words from Ele, their cheerleader since day one. Watching a solo project from an awkward kid from Folsom become a band after making friends with the girl who laughed at his sets.

“Andrew’s always the heart and soul of the band as voice and chief songwriter, but through these lineup issues, Liz really stepped up to become the band’s leading co-star. They could change lineups 100 more times, and from now on, I’ll always think of Andrew and Liz as G. Green.” 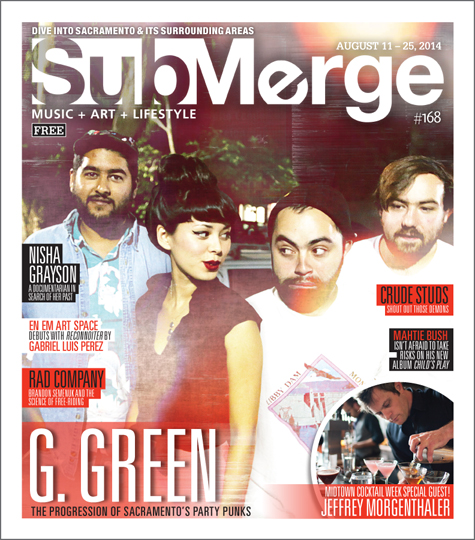