You’d think that the organizers of the wildly successful three-day blowout TBD Fest would be worn out and ready for a break from producing large scale events, but you’d be wrong! Just as our latest issue was going to press (#175, Nov. 17 – Dec. 1, 2014) we got word from TBD’s Clay Nutting and Michael Hargis that they are already back in business and are planning a massive New Year’s Eve Block Party in the heart of Midtown at 20th and J streets and that Submerge had been tapped to be their exclusive media sponsor! And oh, what a party it will be! 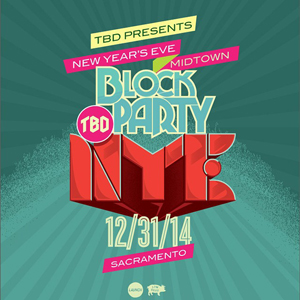 We’re excited to announce that headlining will be the insanely popular Montreal-born and New York-based DJ A-Trak! Besides being one of the most sought-after DJs/producers in the world (having worked with the likes of Kanye West and Jay-Z), A-Trak is also the founder of the influential, taste-making label Fool’s Gold Records (home to Danny Brown, Run the Jewels, Kid Sister and tons of other rad hip-hop and/or electronic artists). A-Trak’s DJ sets are super diverse, crazy energetic and full of dance floor bangers. Co-headlining will be a producer/DJ duo known as Oliver who have gotten crowds moving at some of the world’s largest electronic festivals and have toured with and/or remixed tracks for popular groups like Chromeo and Foster the People. Also receiving top billing is Minneapolis-based producer/songwriter Gigamesh and there are more acts to-be-announced soon, so keep an eye out at Tbdfest.com or Facebook.com/tbdfest for more artist announcements, further word on ticket prices, VIP options, etc. The party will be 21-plus and will kick off at 7 p.m. Keep an eye out for more coverage in our next couple issues!

UPDATE: Promoters have added a couple more acts to the bill! Fool’s Gold Records’ Nick Catchdubs and Sacramento favorites Sister Crayon will join in on the party!