The New Direction of Adrian Bellue

Adrian Bellue is something of a musical warrior and well-focused global nomad. Born out of the belly of Sacramento, he’s now traveling the continent (and imminently overseas) bringing his unique brand of instrumental guitar playing and Tuvan throat singing to all those who care to bear witness. On Sept. 16, 2015, at Harlow’s, he will debut his new full-length album, Steppes, which marks a turning point in his handcrafted career as a solo artist.

“A big part of my performance is the ‘muse’ part of the music,” exclaims Bellue. “Each song has a separate story and inspiration.” Though, it’s not always a happy one in his case. The first track off the record, “Return to Dawn,” was written after losing a close friend, drummer Broughty Cole—who went missing in March 2014, only to be found dead off the banks of the Sacramento River. From that day on, Bellue drastically changed his direction in life. “I quit my job, cut the lease on my house, turned in my car and got a hippie van … loaded up, and went out on the road. I dove into the deep end.”

Through his fearless efforts in braving a boundless tour schedule, Bellue has certainly made a name for himself as a hard-working, finger-grooving freewheeler. He skillfully incorporates aggressive slap/tap technique to the guitar, rooted in everything from world music to heavy metal to kung fu. Topping it off, the dude can beat box and throat sing at the same time! Not easy.

A fan of the hard stuff in his youth, he took to shredding on a BC Rich Warlock electric guitar. “The ‘Slayer guitar,’” laughs Adrian. “And I was the kid with long hair and the Iron Maiden shirt—the weird kid.” It was right around this time that he discovered his passion for throat singing. “In the metal community, it’s all about making crazy noises with your voice,” he adds. But once he delved into the exotic overtone style, which allows vocalists to hit up to three notes at once his taste in guttural sounds suddenly began to change. “I couldn’t listen to much metal after that.”

Years later, he attempted going to college for a guitar major only to quickly notice there was a real road ahead of him, as many of the resident collegiate pickers were more conventionally advanced. “Everyone was good, and I wasn’t so special anymore,” he says. “So, I put down the guitar for a long time and picked up martial arts. It helped clean me up; I was kind of going on a bad path.”

In time, with his newfound knack for the art of kung fu, he realized himself on his way to being a pro martial artist—that’s until he tore up his knee quite badly and underwent serious surgery. Subsequently, while on disability, a familiar road led back home for Bellue. He found himself bedridden with nothing but an old beat-up acoustic guitar this time around.

“It didn’t even have all the strings. That’s when I started to use the guitar to create my own soundscapes,” he recalls. “It influenced me to do ‘guitar kung fu.’ I would practice hand strikes on the body, like I did on wooden dummies—only the percussion. Martial arts are all based on rhythms and melodies, even. I started hearing the music in my head.”

Four years later, and he’s on a roll. Having just recorded his first complete album in Montreal with producer and renowned guitarist, Antoine Dufour, Bellue has also been privileged enough to be accepted into the solo guitar community with the likes of Andy McKee, Don Ross and Thomas Leeb.

“Andy’s embraced my music and helped me work toward a path with this,” Bellue remarks. And to show his appreciation, he covers McKee’s “Ebon Coast” on his upcoming release, adding a “reggae feel” to the tune that he chiseled out while touring in Hawaii (where his island buds are in reggae bands). Don Ross’ “Dracula and Friends” makes its way into the lineup, as well, but Thomas Leeb (a.k.a. the “Groove Nazi”) beyond a doubt inspired one of the original tracks, “Dream Walker.”

“Thomas is known as the ‘rhythm and percussion guy’ since he studied in Ghana,” says Bellue. “His teacher would smack his hands with sticks if he didn’t get the rhythms right. It’s pretty militaristic how they coach their students out there. If you screw up, your instructor can lose their reputation. Last year I did a competition where Thomas was the main judge; he grilled me pretty hard on my groove, but in a constructive way.”

This eventually led Bellue to having stress dreams about Leeb in which he would wake up in the middle of the night with the taskmaster pointing at him, saying, “Don’t lose the groove!” It, in turn, stirred him to practice his own restless nocturne, so to speak. “I didn’t think I’d get away with calling the song ‘Groove Nazi,’ so, I called it ‘Dream Walker’ instead,” Bellue says. 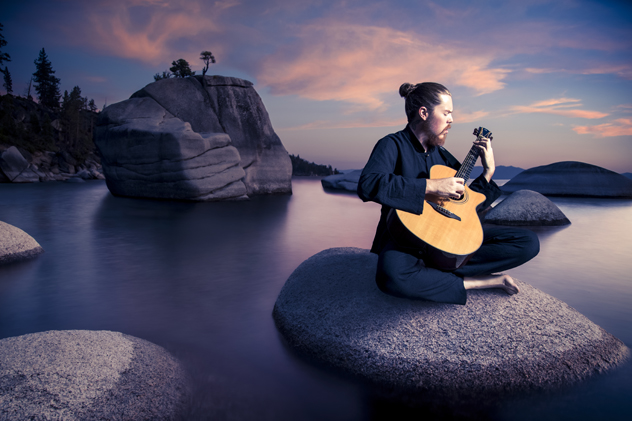 As far as trajectory goes, Adrian Bellue is definitely forecasting to play several international dates in the near future, but his vision is: having the opportunity to travel to Tuva, which lies at the Russian steppes of the Altai Mountains. Moreover, he has determination to make a documentary film there about the pastoral throat singers of the region through an independent Kickstarter campaign. His approaching record was funded in a similar fashion by merely using his iPhone everyday—making videos and reaching out to a community of online lookers and listeners to raise his rites.

“Making money’s good, paying your bills is important, but … ultimately, that’s all just icing on the cake for me. It’s really my therapy when I can captivate someone; influence them,” he candidly says. “It’s about the person who reaches out to you and says that they love your music. Thank you. I always get the right reminder at the right time of what I’m doing.”

From performing at big venues like John Lee Hooker’s Boom Boom Room, popular breweries and wineries, to doing house parties and occasionally dropping in on open-minded churches; whatever it takes to make day-to-day gigs happen, Bellue heeds the call. It’s unarguably a full-time job for the finger-style virtuoso. What’s more, he writes his own business proposals, attends trade shows to gain sponsors and extends salutations to local colleges to enlist budding photographers and videographers.

“It’s a free exchange of services and contacts,” he admits. And his advice to anyone struggling, “Build a team, because, Rome wasn’t built in a day—or by one person. I tell my friends in bands that it’s a ‘do-it-yourself mentality,’ but, a lot of the best things are made by teams. It’s all about people who are part of an active network of other people.”

On the whole, Steppes symbolizes that newness is goodness for Adrian Bellue. In fact, his Tuvan-tinged beat-boxing style (from the album’s hidden track) has been slaying crowds ever since its inception into his repertoire. He’s even made his own mother an admirer of traditional throat singing after taking her to a live show of the authentic group Huun Huur Tu, which consequently brought her to tears. The fresh direction of his tonal odyssey is that of someone dedicated to their craft on every level. When setbacks pop up, he is consciously prepared for them.

“Challenges, they come and go, and they’re different all the time,” he says. “I try to plan the next move, and always have a finger on the pulse of my career. With music, you can really go deep and pull someone’s heart strings, and you never want to close any doors. I used to be in a dark spot, and music got me out of it.”

See Adrian Bellue live at Harlow’s on Sept. 16, 2015, for his CD release show. Also performing will be Ian Ethan Case. Tickets are $15 in advance and can be purchased through Harlows.com. For more info on Adrian Bellue, go to Facebook.com/adrianbellue. 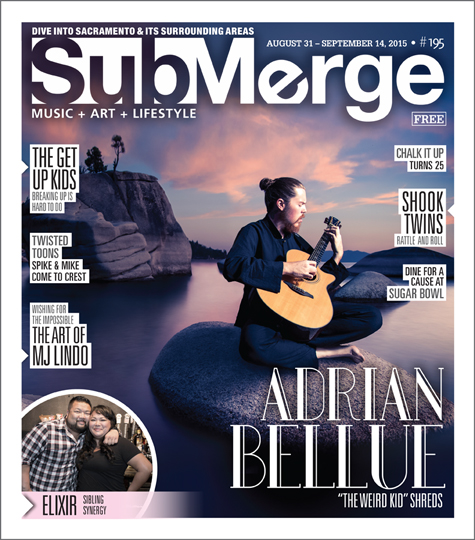