Adrian Bourgeois proves the album is an art form worth saving with his latest release, Pop/Art

The digital music revolution, with its emphasis on EPs and singles, has set into motion the extinction of the traditional long-form album, but local singer/songwriter Adrian Bourgeois says not so fast.

“You keep hearing that the album is dead and people have such short attention spans and nobody wants to listen to more than 30 seconds of a song… So what’s the logical response to that? Make a double album,” Bourgeois tells Submerge over the phone. “There are really no rules to this thing anymore. Why not just do the absolute worst possible thing to do? You might as well, right? If you love it, if it’s what you want to make, then make it.”

Bourgeois says he’s been working on the songs that appear on Pop/Art for “seven years or so.” After the release of his first album, he’d come to something of a crossroads in his musical career. His debut was getting good reviews and seemed to be generating interest in the industry, but things weren’t quite happening for him just yet. He was unsure whether or not to keep working his first album or start working on a new one.

“I started talking to a couple of different people about the prospects of making a record, and a couple of opportunities came up, but they got postponed,” he says. “All the while, I was writing more songs. At some point along the way, I decided I got to make another album at some point, and waiting for another opportunity to come around is not really getting me anywhere these days, so I should probably take matters into my own hands and do it myself.”

So, Bourgeois armed himself with $500 worth of recording equipment that he says he’d purchased with Christmas money and took a route that many indie musicians have done in the digital age: He started making an album in his bedroom.

While this may sound like a very personal, intimate process (and it was for Bourgeois), the songwriter says he focused more on the craft of the songs as opposed to the feelings behind them.

“A lot of times when I’ll write a song, the first thing that I’ll hear is the track. I’ll hear the finished product before I’ve ever written anything, and then it’s almost like learning the song,” he says.

“It was kind of liberating to sit down and bring them to life.”

He worked on Pop/Art for two and a half years, mostly on his own, playing almost all of the instruments. However, as he said to Submerge in an email, the album wasn’t entirely a one-man show. Cake trumpeter Vince DiFiore and Probyn Wilson (the Brian Wilson Band and many others) both make appearances, as do local colleagues Autumn Sky and Ricky Berger. Bourgeois’ father Brent also pitched in. Bourgeois confides that Berger’s contribution to Pop/Art extended beyond just lending her vocal talents to the record.

“There were some songs on here that I sent to her and she said, ‘You’re better than this. Keep working on it,’ and I trust her enough to hear that from her,” Bourgeois says. “The album would not be as good as it was if not for her.”

Pop/Art is an instantly gratifying album highlighted by Bourgeois’ creamy vocals and lush arrangements. Songs such as “Jonah” provide a grittier rock punch while the piano-driven opener “New December” harkens back to pop’s grand, vinyl past…you know, back when people actually listened to albums en masse. At 24 tracks, it’s impossible to find one that’s simply filler. However, though the album certainly stands as an accomplishment, setting a high bar for Sacramento’s 2014 local releases, Bourgeois remains humble.

“I almost consider this double album to be a complete underachievement because in the amount of time it took me to make this, The Beatles recorded Rubber Sole, Revolver, Sgt. Pepper, Magic Mystery Tour and The White Album, so this is me slumming it I guess, when you think about it, in comparison,” Bourgeois says.

Bourgeois lends further insight into the making of Pop/Art in the following interview.

Were you shopping your debut album to labels?
Yes and no. A label is one potential tool that I considered and flirted with over the years. My goal is to get my music heard by as many people as possible. There were people along the way who have helped me a lot and have provided opportunities. Any musician will tell you this: You get a lot of people with great intentions who say they love you and the music you make and they’re going to make things happen for you, and then you never hear from them again. There’s a lot of that, and that’s fine. I understand there are all sorts of factors that need to be taken into consideration. The good thing about today is that it’s a lot more possible than maybe ever before to say, “I’m going to put it out myself, and I’m going to distribute it myself.” The tools I have to do that really aren’t that much less than what anyone else has. They might have the relationships and the contacts to get it heard by, quote-unquote, the right people…but I don’t even know what “the right people” means anymore. At this point, I want people who like the music to hear it, and those are “the right people.”

It was six or seven years since your last album. Were you getting disillusioned at any point?
I grew up in a musical family. My dad was in the music industry for a long time… I kind of had a balanced view and a realistic view of how everything worked, but it was frustrating sometimes, definitely. I think “Shot in the Dark” [from Pop/Art] was written about that… But I understand. The music industry is a place of short attention spans. They hear you and they love you, but then they hear someone else that they love. There are just so many different factors that I stopped analyzing it too much and took a proactive approach. What can I do to make the life that I want for myself.

Did having a father in the music industry help you gain that perspective?
Yeah, absolutely. It’s definitely given me a lot of experience without necessarily having to experience it first in a lot of ways, if that makes sense.
On the other hand, I feel like I know too much because I’m quicker sometimes to not try something because I know it doesn’t work that way. And then you see some band that knows nothing about the music industry and does something extremely rash and stupid and it makes them world famous. There’s that Catch 22. But overall, he’s great to have around for advice and his years of experience.

You said these songs were written over a seven-year period. You must have gone through a lot of growth as a songwriter and as a person in that time. Do you hear that when you listen to the album? Does it almost sound like a scrapbook of the past seven years of your life?
It’s interesting, because I don’t think I’ve changed all that much as a person over the course of my life. If you’d known me as a 6-year-old, I’m pretty much the same guy, I think…maybe a little wiser, maybe a little less. I think it’s the same thing with my music. A lot of people at some point go through this radical transformation, but that’s never been me. I’ve just evolved over time and refined who I was, but I’ve always been at the core the same person. That’s why I think songs from six or seven years ago fit just fine next to songs I wrote even in the process of recording [Pop/Art]. But it is interesting hearing that growth. It’s almost discombobulating when I imagine what these songs were written about. One song on the record might be about meeting somebody, and the next song is about being in a relationship with that person, and the song after that is about breaking up with that person…
At the end of the day, if nothing else happens, it’s something that I’m always going to appreciate having. It’s like a diary or anything you have in your life that just captures this period of who you were. I’ve never been one for tattoos, but this album is my tattoo, I guess. This is me and who I was and the imprint I made at that point in time.

You said you hear the whole arrangement before you even start writing a song. Have you always listened to music that way? Do you think, “OK, this is how this was put together?”
When I listen to music—I overanalyze everything—but with music, I expect it to be really good. I don’t listen to a wide variety of music. When you ask them what kind of music they like, most people will say they like a little bit of everything, but I’m the exact opposite of that. I like a lot of a few things. It’s less necessarily important to me as to how it makes me feel or if it relates to me, I’m like, “Is this a really great lyric? Is this a really great melody? How is this arrangement brilliant?” And if it isn’t, I don’t listen to it. If I was stuck having to listen to just The Beatles or The Beach Boys for the rest of my life, I probably wouldn’t complain too much.

Celebrate the release of Pop/Art at Luigi’s Fungarden at 6 p.m. on Feb. 9, 2014. In the meantime, pre-order a copy of the album today at Adrianbourgeois.bandcamp.com, and you’ll be able to download a digital copy of the entire thing immediately. Pop/Art will be officially released on Feb. 4, 2014. 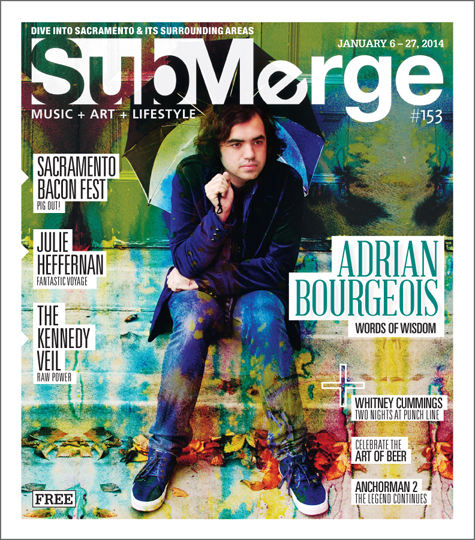