As the hot Labor Day sun set in Sacramento, a young and riled up crowd gathered in a long line up and down R Street surrounding Ace of Spades. Many of these teens were eagerly anticipating the inspiring angst-driven tunes of Naples, Fla.’s Against Me! before returning to school after a memorable Labor Day.

Opening the festivities was Torrance, Calif.’s Joyce Manor. The band wasted no time belting out loud pop-punk tunes that commanded the increasing crowd’s attention. Guitarist and vocalist Barry Johnson aggressively strummed power and octave chords and singing discernible vocals that were stylistically akin to ‘90s cult icon Jesse Michaels of Operation Ivy fame, or at times similar to Trevor Keith of Face to Face. Most of the songs were short and sweet, and they had to be since their set lasted only 20 minutes. However, songs such as “Constant Nothing” and “Midnight Service at the Mutter Museum” had lasting power beyond the two-minute tunes they were playing; pop-y bass lines were being delivered from Matt’s Fender Jazz, while the mid-tempo drumming was precise. For a band seemingly unknown, several members of the crowd were singing along to their catchy songs and had Johnson stating in between songs, “We’re so fucking pumped to be here.” It was certainly refreshing to get a little dose of some fun filled, throwback to my teenage years tunes.

The middle slot featured Phoenix, Ariz.’s Andrew Jackson Jihad. Having no previous knowledge of what this band was about, it was assumed that a group of hardcore political punks with plenty of swagger and stern messages would grace the stage. However, a slightly different cast of characters appeared. Two men came out from backstage individually carrying an upright bass and an acoustic guitar. An enthusiastic crowd cheered on before the duo played their first note. Guitarist and vocalist Sean Bonnette expressed much gratitude for being a part of the show and quickly began a set filled with punk-y/folk-y songs like “The Michael Jordan of Drunk Driving,” which included silly lyrics, “The Michael Jordan of drunk driving played his final game tonight / Burdened by his loneliness he wanted to feel alive / His laziness built the pyramids / And his solitude was a knife / The Michael Jordan of drunk driving played his final game tonight.” Other songs played were essentially mocking taking yourself too seriously with lyrics like, “Growing up fucking sucks / Got too much stuff / I’m afraid the older you get the more you forget things.” A sarcastic version of Simon and Garfunkel’s “Mrs. Robinson” featured the altered lyrics “Here’s to you Mrs. Robinson / No one will care if you live or die.” Although Andrew Jackson Jihad was amusing, its shtick got old quickly. 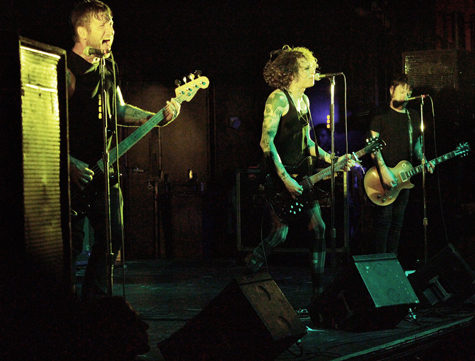 After a brief set change, Against Me! stormed the stage in unison and quickly filled the room with anthem driven punk rock tunes. “White Crosses,” which featured Laura Jane Grace’s commanding vocal hooks shouted in the chorus: “White crosses on the church lawn / I want to smash them all / I want to smash them all,” was accompanied by catchy lead guitar melodies and steady drumming by Jay Weinberg (son of legendary Bruce Springsteen and the E Street Band drummer, Max). The group creatively transitioned into the popular 2011 hit “I Was a Teenage Anarchist,” which featured the infectious chorus hook “Do you remember when you were young and you wanted to set the world on fire?” Guitarist James Bowman and bassist Andrew Seward added nice touches with spot-on vocal harmonies and precise playing. Many in the crowd were dancing or moshing with their fists in the air singing along and fully appreciating the moment. “New Wave” conveyed a sense of optimism and hope providing head bobbing rhythms and Grace’s lyrics, “Come on and wash these shores away / I am looking for the crest / I am looking for the crest of a new wave,” had current believers enthralled and newcomers buying in.