When the guitarist of California-based jam band Animal Liberation Orchestra (ALO) answers the phone, he is in the middle of teaching his 5-year-old daughter how to ride a bike in Bernal Heights, his neighborhood in San Francisco.

“I’m trying to teach her that she has to be OK with falls,” Dan Lebowitz explains. “It’s sort of like music.”

If there is any band that knows about perseverance, ALO must be one of them. Three of four members have been playing music together for more than 20 years, since junior high.

Six minutes into the phone conversation with Lebowitz, there is some commotion. A small voice lets out a yell.

“Can I call you back?” he asks apologetically.

Someone might not be OK with falls just yet.

He calls back about 20 minutes later, and the conversation quickly picks up where it left off.

Lebowitz just got home the day before from playing the Jam Cruise Festival in Florida with ALO’s bassist Steve Adams and drummer Dave Brogan in their side project Brokedown in Bakersfield.

Soon, the three, along with ALO keyboardist/vocalist Zach Gill, will be on the road again for Tour D’Amour, ALO’s annual trek along the West Coast, which is in its ninth running year. What started out as a tour that just happened to fall on Valentine’s Day has since evolved into a tradition, and now the band donates their proceeds to school music programs. This year’s proceeds will go to the San Francisco Creative Arts Charter School.

In the years since the band rebranded themselves as ALO, they have been just as likely to tour internationally as they have been to get caught playing a show at the Sweetwater Music Hall in Mill Valley, California. In recent years, they’ve played the likes of Bonnaroo and SXSW. When they played the latter in 2012, Rolling Stone deemed them a “SXSW 2012 Can’t-Miss Act.” Last summer, they toured with Jack Johnson, a close friend of the band (Gill has been best friends with Johnson since their college days at UC Santa Barbara). ALO even has a following in Japan.

But touring the West Coast is a whole different experience, Lebowitz says.
“Special things happen on the West Coast,” he continues. “We feel at home. We feel a certain freedom with these crowds.”

Tour D’ Amour will kick off at the Troubadour in West Hollywood and end with three separate shows at the Fillmore in San Francisco. Joined by folk bands Fruition and T-Sisters along the way, they will also make a stop at Harlow’s in Midtown and at Main Stage Theater in Grass Valley.

To date, the band is in seven albums deep. The last four were pressed by Brushfire Records, Johnson’s label.

Regardless of whether you’re into jam bands or not, take your pick of any ALO album; it will squash even the subtlest onsets of the mopes. Exploring different sounds together, whether it be rock n’ roll, pop, funk or different instruments, ALO’s instrumentation and songwriting remains refreshingly upbeat, soulful and smooth.

For instance, Lebowitz introduced the pedal steel guitar on the band’s 2010 release Man of the World. A musician who assures that if he could no longer be in a band, he would make guitars, Lebowitz was a luthier’s apprentice after graduating from UC San Diego. It’s an instrument that he is especially fond of.

“You know how they have those pictures of heaven of angels with harps?” he asks. “In my heaven, they play the pedal steel.”

Another voice chimes in on the other end of the line.

“They play lollipops!” his daughter adds.

Now, ALO’s eighth album, which will also be released on Brushfire, is currently in the works. The band already has a studio booked for next month to start recording. 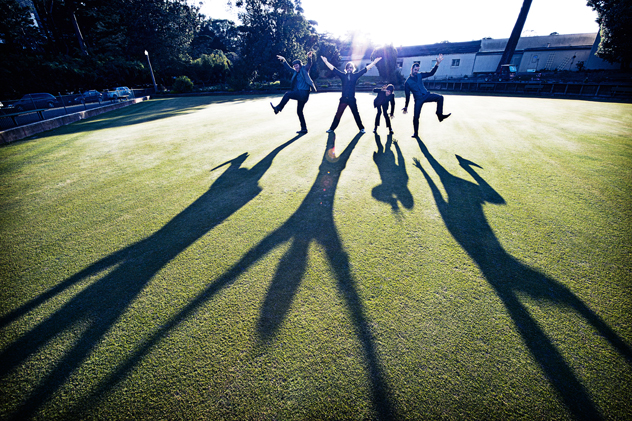 “This is a very exciting time for us,” Lebowitz says. “The album will be a snapshot of where we are right now.”

Of course, they intend to introduce some of their newest songs to the stage during Tour D’Amour.

Rewind more than 25 years ago, and Lebowitz, Adams and Gill were performing together on stage for the first time. That’s when they signed up to play what they thought was their middle school’s talent show in the cafeteria.

Unbeknownst to them, the school alternated between putting on a talent show and a musical each year, and that year they were putting on a musical.

Not wanting to disappoint these boys who showed up prepared with instruments and a set list, whoever was running the show agreed that the boys could play their set during the intermission if, in exchange, they performed as extras in the musical. It was The Saga of Dead Dog Gulch, an obscure Western operetta written just for schools.

“It worked out great!” Lebowitz remembers.

By the time intermission rolled around, they had already been onstage an hour, and any onstage anxiety they had had vanished. They pulled their costumes halfway down in an effort to look cool and played their set, including “Walk Don’t Run” by the Ventures, “Centerfold” by J. Geils Band, and “Get Off of My Cloud” by the Rolling Stones.

Somewhere, there is VHS footage of the whole thing.

The friends have been playing music together ever since. By high school, they were covering Pearl Jam, Radiohead and Steve Miller Band.

It wasn’t long before they were going by the band name Django and writing and performing their own songs. In 1996, Brogan joined the group. That summer, the band members, being college kids without a need for much money, took off for a road trip to Georgia. One thing led to another, and the next thing they knew, they were jamming in the company of the James Brown Band.

“We got to know James Brown a bit,” Lebowitz says casually. “It was really cool.”

By 1998, they were playing music as the newly named ALO.

Without a doubt, the band members credit public schools for their musical education, which is what inspired the band to make Tour D’Amour a benefit for music education.

“That stuff is getting cut left and right,” Lebowitz points out.

Since their own early beginnings, when it comes to playing live shows, ALO’s spirit hasn’t changed, he says.

What does change from show to show, he adds, is their performance. Sometimes they improvise. Songs may end up longer than the recorded versions when they play live. They don’t hesitate to take their time when it feels right to do so.

“We do whatever feels right at the moment,” Lebowitz says. “When we’re feeling inspired, we dig deeper into it. Nothing’s off limits.”

Especially when it comes to touring the West Coast.

See ALO live in Sacramento at Harlow’s on Feb. 19, 2015. They will also be performing at Main Stage Theater in Grass Valley the following night on Feb. 20, 2015. Don’t forget, proceeds from ALO’s Tour D’Amour will help keep music in schools! Get your tickets at Harlows.com or at Thecenterforthearts.org. Doors open for both shows at 7 p.m. 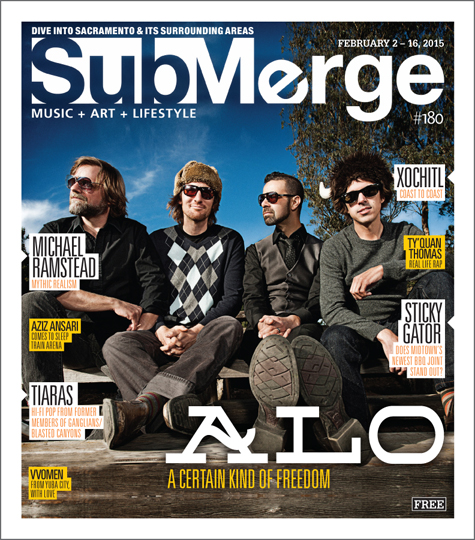