Always on the Move 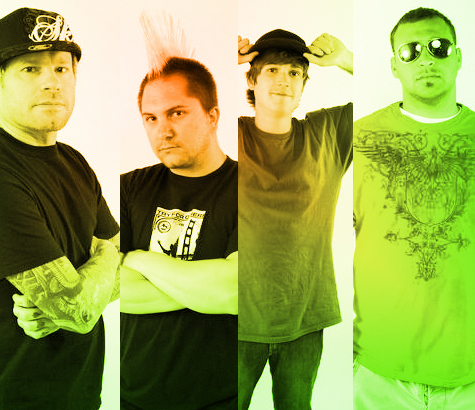 Arden Park Roots are at home on the road

The road is fuckin’ rough. Ask any DIY touring musicians and they’ll likely confirm this. Long drives, sketchy venues, snakey promoters trying to screw you out of gas money, pissing in water bottles while driving the van and then the van breaks down–it’s not a glamorous life by any means, and Sacramento’s reggae/rock group Arden Park Roots know this from first-hand experience. The local foursome, consisting of vocalist/guitarist Tyler Campbell, lead guitarist Nick Ledoux (aka “El Guapo”), bassist Spencer Murphy and drummer Jonny Snickerpippitz, have become road warriors, logging thousands of miles over the past couple years both in support of their self-released 2008 full-length album The Hard Way and as their alter-ego Sublime tribute band, The Livin’s Easy.

On one recent tour, the guys had a couple days off between Colorado and Arizona and decided to do some sightseeing. During a recent interview with Submerge, Jonny remembers, “We were like, ‘You know what? The Grand Canyon is right over there,’ so we started busting over that way.” Not long after, their vehicle overheated, forcing the guys to pull over to allow it to cool. Jonny, not being the type of guy who’ll just sit and wait for a vehicle to cool down, decided to charge up a mountain on the side of the highway. A little side-of-the-road hike, if you will. “There was just this huge mountain next to us,” says Jonny. “I was like, ‘This is kind of cool,’ so I started running up it and all of a sudden I heard, ‘Dude, Jonny, stop! You’re up too far.’” Meanwhile, Campbell and the rest of the crew were down below, looking up at Jonny climbing a mountain, laughing at him while filming his shenanigans on their cell phones. It was about this time when things went downhill fast for Jonny, literally.

“I looked back down and thought, ‘Hey, I’m going to dazzle the guys and just run all the way down,’” he remembers. “I missed about the last 20 feet and just shattered my ankle. I crawled up onto the highway, rolled onto my back and my foot flopped one way, rolled over the other way and my ankle flopped back, it was obviously offset.”

Ouch! A drummer with a broken ankle would have abruptly ended the tour for most bands, but not APR. They got Jonny to a hospital that night, where they reset his foot and told him he’d need reconstructive surgery. The timeline for the next couple days went a little something like this: Monday night, Jonny checked in, Tuesday he had surgery, Thursday evening he was released and Thursday night he played a “painful” gig. What a savage!

Jonny and Tyler Campbell stress how cool the venue in Flagstaff, Ariz., was with the whole situation. Campbell remembers rushing there first thing Tuesday morning after crashing in a hotel the night before (Jonny was in a hospital bed of course) and explaining to them what happened. “They were like, ‘Dude, it’s cool. You guys can stay in our apartment while you’re here.’ So they housed us for three whole nights. Meanwhile, I’m showing them the video on my cell phone,” Campbell says with a good laugh, “So they knew it was legit.” The understanding staff from the venue even called up a bunch of local musicians to come in and jam on APR’s equipment that night. Campbell remembers the good vibes well. “So the night we actually played, it was this big musician forum and a really cool, touching, ‘town come together’ type of night.” Luckily, that was the last scheduled night on the tour, so APR headed home with both Jonny’s ankle and their spirits elevated.

Turns out, APR is used to this kind of warm and welcoming reception when on the road. As our conversation turns toward which random markets around the country they do well in, it suddenly becomes clear why these guys love touring so much.

“The Midwest man, they just like fucking California bands and they love reggae music,” Campbell says. “Rapid City, S.D., is our best town on the road, I don’t know why.” Jonny interrupts with, “We sell out every time. We usually play there two nights in a row.”

If this is not enough proof that APR is the ultimate party band, said venue in Rapid City quite literally ran out of liquor by the end of the night after APR had played their three-hour set (half originals, half Sublime tribute). “They had nothing,” jokes Campbell. “Literally by the end of the night they ran out of liquor. They were like, ‘Do you want a Corona, because that’s all we have.’” The two also point to Durango, Colo., as another one of their favorite random towns to play. There’s a neat old theater that has been pimped out with a top-notch sound system complete with four audio guys to assist APR in sounding as good as possible. But the steakhouse down the street where they get treated to five-course meals is just as big of a draw.

“That’s why we spend so much time in the Midwest,” says Campbell. ”They fucking feed us, they house us and they fill up the clubs. A nice meal out on the road is heaven.”

Currently Arden Park Roots are home, eagerly awaiting the release of their second full-length album, No Regrets in the Garden of Weeden, which was recorded over the winter at Pus Cavern just before the group left on the infamous ankle-shattering tour. No Regrets…, which is a huge leap forward for the band as far as diversity in sound goes, will be released on July 9, 2010 at Harlow’s. Fourteen songs made the final cut, with a good number of tracks getting the axe, not because they were B-side material, but because APR was confident they already had enough songs for it to be a solid album with “no skippers,” as Campbell puts it. That extra material will be used for the band’s third album, which the two agree is already about halfway done. One track from No Regrets… that kept coming up during our conversation was “What You Got to Lose,” which, with its haunting vocal melodies and hybrid electronic/dub/reggae-rock vibe, is Campbell’s favorite.

“I can listen to that song and not think about myself,” he says. “Which is weird because every song I hear of myself, I just analyze my performance. With this song I can just sit back and listen to it and go, ‘Now that’s a good fucking song.’”

“What You Got to Lose” is a perfect example of just how much APR branched out on No Regrets…. While in the studio, the band left no idea unexplored; they experimented with new instruments, layered sounds and most importantly they learned that one of the most important aspects of making an album is allowing the engineer to do his job, to give him the time and space necessary to do what he does best. “We didn’t have a blank check,” says Campbell, “But we had a budget that was comfortable. We were able to go in and not worry about time.” For that reason, Pus Cavern’s Joe Johnston was able to take his time when engineering the record–and it really shows in the final product. No Regrets… is polished but not over-produced; it’s a leap forward for APR, no doubt, but not so much that it leaves their old fans behind. They still rock, they can still bring the party; they just do it with a little more class. “When it comes to vocals,” Jonny says of Campbell’s performances on No Regrets…, “You can tell we’ve been out on the road quite a bit between the first and second albums. He can do more stuff now. He’s got a gorgeous voice, man. You can hear stuff that he does differently, more maturely.”

As Jonny’s foot slowly heals (he was still on crutches at the time of our interview), the group is realizing that this downtime in between releasing No Regrets… and hitting the road again isn’t such a bad thing. Campbell sums it up best when he says, “On the bright side, with this ankle injury we’ve had some time to recollect ourselves and really get hungry again.” With a new album and an insatiable appetite to hit the road again, Arden Park Roots are looking forward to finishing 2010 on a high note doing what they do best: working hard. “You can’t expect opportunities to be handed to you,” says Campbell, “You’ve got to cover your own ass.”

Arden Park Roots will celebrate the release of No Regrets in the Garden of Weeden on July 9 at Harlow’s and yes, Jonny Snickerpippitz will be healed enough to play. The album will be available through all digital outlets, at all Dimple locations and at shows.