And Be Present, Y La Bamba 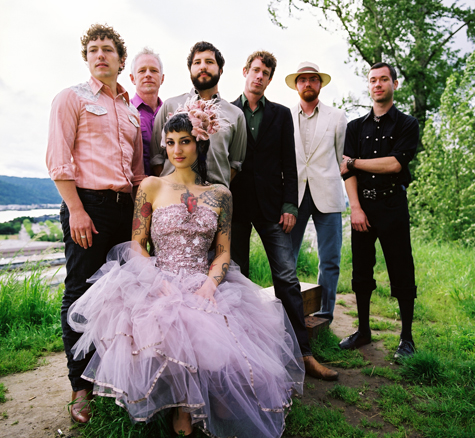 All sound is building. That doesn’t mean music can’t be original, it just means influence is a given. It’s how you interpret that influence that makes something original. Take Y La Bamba, for instance. The sound–self-proclaimed gypsy-pop, press-reputed art folk–embodies a certain sacredness. The meld of dreamy percussion, staccato swells of accordion, guitar licks evoking traditional Mexican songs, all move as one, almost with a ritualistic sense. The most enchanting part is the voice of Luz Elena Mendoza; her loose webs of harmony and vocal flutterings tapping notes all over the register. She seems in a trance, like she’s merely a medium, channeling these noises. In some ways, it’s true: She’s a medium for her influences. Mendoza grew up spending summers in Northern California orchards with her family and a larger Mexican community. There were a lot of parties with many musicians, during which Mendoza would see her father perform freely.

“He would be the only one in the family to have that musical drive,” Mendoza said. “I saw him kind of be out of his body, and for me to be little and grow up and see that, I guess I was just trying to tap into that, naturally that kind of stuff just finds you.”

Those early summers were the basis of Mendoza’s musical foundation, of seeing “the passion, the rawness, the expression,” she said.

As an adult, Mendoza relocated to Portland, Ore., her current home base, along with her cat, Bamba, who unintentionally became the reason for her band’s name.

“I made up a moniker, Y La Bamba, me not being present, and the cat,” Mendoza said.

The band has now grown into a six-piece group, with Mendoza still writing the skeletons of each song, filled into full-body sounds by her band mates. The group is currently on a West Coast tour, recently having made their first stop in Seattle, where Mendoza takes a minute to answer all these questions and reflect on her Northwest home.

“Since I’ve been living in Portland, I’ve just been becoming my own, and definitely have my roots within my core,” Mendoza said. “Everything I do with music, I see the image of my father and my mother and my ancestors. But because I live up in Portland it’s been hard in the last few years of my adult life to be connected to my ethnicity, the traditions my family had.”

Despite the distance from her early roots, Mendoza’s been lucky to fall into the arms of the growing musical body of Portland, that beautiful Northwest hub of artists in a forest. Soon after she began playing music around the area, Mendoza was lucky enough to have her first album, Lupon, produced by The Decemberists’ guitarist Chris Funk, and released by the quickly budding Portland-based label, Tender Loving Empire.

That northwestern tip of Oregon is quickly becoming a strong presence on the country’s map of music, thanks to some talented heavyweights like Modest Mouse’s Isaac Brock, The Decemberists’ Colin Meloy, M. Ward and others.

“Portland’s really cool like that, there are so many musicians, a lot of people that have made a name for themselves outside of Portland,” Mendoza said.

However, it’s not just the bigger successes who give Portland its sonic reputation, it’s the community itself. Artists actually supporting other artists.

“Because Portland is such a music Mecca, it’s not hard to go out and play a song at a local pub and have people support you, and all of the sudden people supporting your vision, it just naturally happens,” Mendoza said.

Not to be misled, Portland may be becoming the land of milk and honey, but not in a lucrative sense, more in the way of ample human resources, most importantly, support.

“It’s not like we’re all making a whole shit-ton of money,” Mendoza said. “It’s not like something you seek out, it’s like dinner’s ready, just sit down and eat.”

After the success of Y La Bamba’s first record, Lupon, many things began to come to light about Mendoza’s past, one being an excruciating period of her life when she contracted amoebic dysentery and giardia while traveling at a young age. The illnesses took a gigantic toll on her overall health and resulted in substantial weight loss and depression. The repercussions of that experience are very much present in Lupon. However, despite their being at the lyrical forefront, they’re still tender wounds for Mendoza.

“I know you could sit there and talk about it like, ‘We need those things, they’re allies in later life,’ but for me they really stick in my spine,” Mendoza said.

When she first arrived in Portland, Mendoza was still very much suffering from her sicknesses, which bled into a lot of her interviews and musical demeanor.

“All of those things are part of my quilt,” Mendoza said. “Anything that creates a chip on my shoulder is going to be more prolific for me to explore.”

But now, Mendoza is ready to lay those things aside and grow from them. The newest Y La Bamba installation, Court and Spark, set to come out early next year, is produced this time by the recent Portland transplant, Steve Berlin, band member of Los Lobos.

This album devotes a larger chunk to her roots, with more tracks sung in Spanish.

“There’s way more songs in Spanish. It’s not like I was trying to go for that, it just kind of naturally happened,” Mendoza said.

Despite its subconscious appearance, keeping that presence in the Y La Bamba sound is something that’ll be protected.

“Writing in Spanish is something I don’t ever want to forget; I feel like I’m speaking from my ancestors,” Mendoza said.

Beyond her past, Mendoza is ready for forward action, to keep ties to her influences and what’s essentially made her present, and move on.

“For those who are totally hungry for growth, everyone has their own interpretation, but my intention when I wrote those songs was to simplify my mind, and if that’s healing to others, I just want the audience to know that’s there,” Mendoza said. 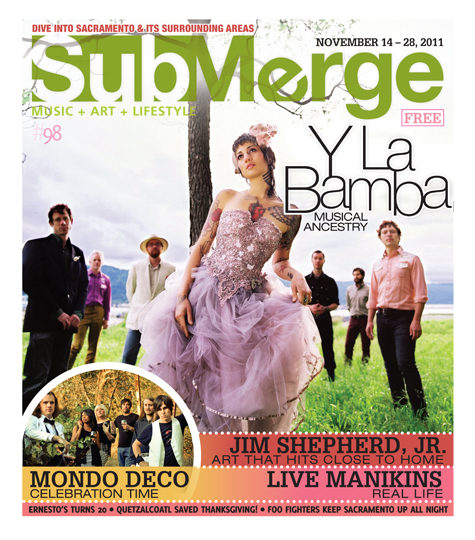