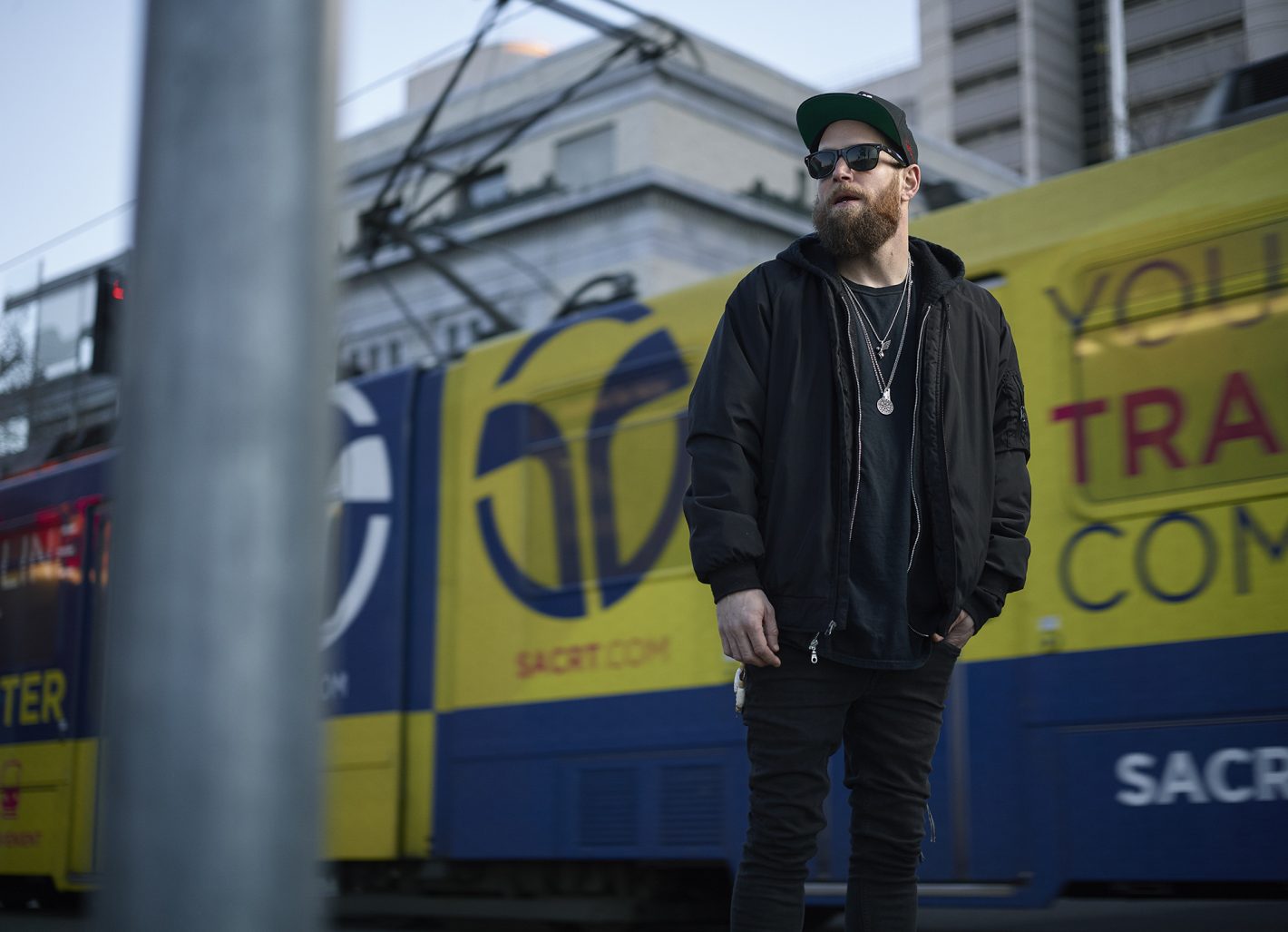 Sacramento’s Andru Defeye is extremely eloquent. Words are his calling. A master of telling his story, his new rap album, Ultraviolet, is named for the light beyond the spectrum of what is visible, and lyrically, it’s a journey of spiritual growth. With his third eye turned inward to create this record, it’s aptly titled.

Defeye is an MC, but he does so much more. A writer, poet, community organizer and event producer, he’s locally famous for always being in artists’ corners, helping them succeed at what they do. Celebrating a decade of working at Sol Collective, Defeye produces a host of art, music and community events. The Most Open Mic in the City is first Sundays and Plugged is on second Sundays at Sol Collective.

“Currently, Drunk Poetry is my favorite event I’m producing [with Sacramento artist Spacewalker],” says Defeye. “There’s not a regular date for it; Blue Lamp just kind of hits us up. Usually on a Thursday night. It gets stupid packed. And that one really gives me a chance to have fun with the art.

“The Intersection may be coming back this year when it gets warmer out. That’s where we get people together at 34th and Broadway. The idea started with Old Soul looking to do an open mic in Sacramento, and I had no interest in doing a traditional open mic. And then me and Paul Willis started talking about it, and the importance of there being a space for the original residents of Oak Park and new neighbors to have a place to communicate—a space to just coexist. [That’s] why we started The Intersection. Having that space, with all the gentrification happening, is imperative to the city’s growth.”

Defeye’s also the founder and creator of ZFG (Zero Forbidden Goals), a multifaceted collective that facilitates arts in Sacramento.

“In 2017, ZFG led a whole campaign to legalize busking and did pretty well,” explains Defeye. “I haven’t seen any artists get shut down for street performance in the last year or so. The mayor came out and banged on some drums and said busking was cool, so that was real cool. When the Nipsey Hussle show got shot up in 2015, all the venues stopped doing hip-hop. So we started taking it into spaces and parks. We [were threatened with] an arrest at Cesar Chavez Park just trying to create a space for young people and especially people of color and people of marginalized communities to be heard. From promotions—like how do we support artists like Paul Willis, Spacewalker and Philharmonik?—to events where we create a platform for artists and community spaces where it’s safe for them to be heard, that’s what ZFG is all about.”

The core value at the heart of all of Defeye’s initiatives is love.

“I love people,” says Defeye. “I love all people. I’m an empath. It hurts me and makes me all emotional and shit when people aren’t treated right. When things aren’t fair, when justice isn’t served. And when people aren’t loved. As part of what I do, I used to fight a lot. Fight things all day, argue with people all day on the internet, argue in the streets, protesting … There’s nothing wrong with that, it’s necessary work and respect to everyone who’s doing that. But for me, I need to actively love more than actively fight. That’s my main value. I think I got that from my parents. My dad is a minister and my mom is in the choir. We have a lot of different beliefs when it comes to spirituality, but what they taught me was always based in love.”

And it was learning how to truly love himself that led to the flood of inspiration that became Ultraviolet.

“I think for a long time, I’ve always thought about changing things externally, and this album is about looking inside,” relates Defeye. “It felt like touching on something bigger than me with this record. Generally, I’ll work a beat all the way through. Everyone who knows me knows that I take three months to write a song. The process for this album was different than anything I’ve ever done before. I was out in Pismo with my family over Thanksgiving last year, and songs started flooding. I would get these ideas for beats and I wouldn’t even finish the beat before I started having words flow. I just had a lot going on at the time. It was a release.

“It’s really easy to pour yourself into other people and distract yourself from yourself,” he continues. “When I was in rehab, I learned to love the things that other people loved about me. I learned to love the way other people viewed me, but I still had work to do—actually loving me, forgiving myself and letting go of the things I was still holding on to. I was terrified of being outside Sacramento where I wasn’t Andru Defeye, community organizer and guerilla poet laureate, weirdo and producer or whatever labels that I’d given myself as my identity to feel loved through other people’s eyes. I got to a point where I was like, ‘You’ve been growing and growing … you ready for the next level? Ready to face the Boss?’ That’s really what this was, this album is a soundtrack for that.”

During the process of creating Ultraviolet, Defeye had some spiritual breakthroughs.

“I discovered that I’m a healer; I’ve been a healer since I was born,” says Defeye. “I was born with a medical condition and they said I shouldn’t even make it out of the hospital, and then they said I wouldn’t make it past 15. I’m 34 years old. I went through a lot with that, invasive surgeries and procedures and really painful things. I had blamed me and my body for putting me through all of that pain. And it was like, yo, if I hadn’t started out like that, we wouldn’t have gotten all this healing and this drive—it’s beautiful. I’m a healer. I’m miraculous. My body is miraculous; my spirit is miraculous. Whatever light you’re looking for is inside you.”

The album really tells a story. All the songs were recorded in the order that they appear on the album. Philharmonik put the polish on each track. You hear what Defeye was going through with lyrics like these, from the album’s last track done in partnership with Spacewalker, “Extra Vibe”:

Got some things that I’m working on.
Got some people that I’m cutting off.
Said I’m EXTRA good.
Don’t give that no extra thought.
This that extra vibe,
Sittin’ extra high.
Said them demons finna exercise.

“Once you make it out of this self-questioning mentality, and you figure out that you’re enough, you can get a little extra with it,” explains Defeye about those lyrics. “And I was like, ‘Who else would I bring in for this?’ And obviously it was Spacewalker. That’s who I go to when I feel in an extra mood and want to hang out! Her spiritual influence, her personal influence—that’s my little sister, right there.”

Ultraviolet will be released digitally on all outlets March 3, and it’s sure to become the soundtrack for your growth trajectory in 2019. You can get that extra vibe and catch Defeye and friends with all their amazing energy at the album release party March 8 at Blue Lamp, with Spacewalker, Luke Tailor and special guests.

Defeye talks about how live shows offer something more than listening to a record in isolation.

“I think there’s something about live show energy,” he explains. “Like when you listen to a recording, you have your ears. You don’t have all the other senses engaged. I’ve seen folks where they can’t keep a mic in front of their face because they’re moving around so much, but the crowd goes absolutely wild. And that’s because it’s translating visually.”