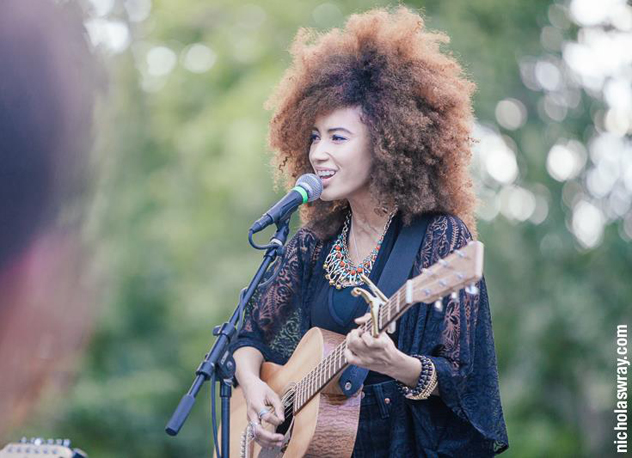 In this era of music when so many genres are constantly being mixed and mashed, and then remixed and re-mashed, it’s refreshing to hear a throwback artist every now and then who embodies a pure, timeless sound without all the distracting fluff and noise prevalent in today’s mainstream.

Sacramento fortunately has such an artist to call its own: the afro-rocking Prince protégé Andy Allo who is one-part funk, one-part acoustic, but all soul.

Raised in Citrus Heights and attending college-prep schools near the Arden-Arcade area through her teenage years, Allo got her start by forming a band in town called Andy Allo and the Traffic Jam and eventually played a solo gig at an open mic at Fox and Goose on R Street.

Since then her career has been spiraling upward after putting out two independent albums, making appearances on talk shows like Jimmy Kimmel Live! and Good Day Sacramento, and touring with Prince’s band, The New Power Generation, as one of his singers and guitarists. Allo collaborated on a few songs with the pop icon as well, some of which appear on her second album Superconductor, released in 2012.

The co-produced album by Prince, prompted a European tour with an extra stop in Japan—a trip Allo just got back from the day before her recent arrival to Sacramento.

Allo came home Friday, June 20, 2014, to headline a live show as part of Downtown Sacramento Partnership’s Concerts in the Park 2014 season—a series of free weekly concerts of local bands and musicians held annually from early May to late July at Cesar Chavez Plaza.

Three bands opened for Allo with DJ Sam I Jam spinning records in between performances.

The other bands included the Delta City Ramblers, the Harbor and Contra, who each brought eclectic elements to the table—and subsequently to the show as a whole—according to Play Big Sacramento booking committee member Danny Secretion.

Allo said she tries to come back to Sacramento as often as she can for her hometown fans, having just been in the area in November for an acoustic show at Assembly Music Hall on K Street.

“I’ve been traveling a lot,” she says. “But yeah when I have downtime, I try to get shows like this and come back and show some love. This is where it all started.”

After about five or six songs in, Contra’s set came to an end with a respectful applause from the audience who were dispersed throughout the plaza. Once Allo was announced to come on next, however, a modest wave of people migrated to the front, making the area a bit more congested than it had been for Contra. 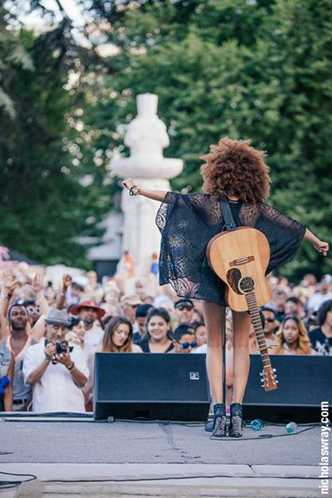 While the three opening acts were comprised of four to six members at a time, Allo pieced a smaller band together—one drummer playing bongos and a bass drum, and one electric guitarist—for a much more scaled-down, intimate show.

She took center stage with her acoustic guitar in one hand and gripped the microphone with the other, receiving a warm welcome from the crowd as she introduced herself in a brief prologue to her set.

Then, she dove head-first right into the music.

Opening with the short but catchy interlude “Sometimes” from her first album UnFresh, Allo immediately had the crowd’s attention as she glided on the bouncy rhythm with her sweet, gentle voice.

She followed up with “When Stars Collide,” a song similar in tone and energy, but coming off her second album Superconductor. During the bridge, Allo weaved in the hook from Drakes’ “Hold on We’re Going Home” perfectly to fit her melody and then transitioned right back into her original lyrics without missing a beat.

The rest of the show pretty much followed that format the rest of the way, jumping from album to album with a couple of Bob Marley and Doobie Brothers covers in between. Her set consisted of tracks such as “I Want Love,” “If I Was King,”“Hooked,” “People Pleaser” and perhaps her biggest hit, “Yellow Gold.”

Allo consistently demonstrated her showmanship onstage with callbacks, clap-alongs, and even some prewritten/freestyle bars sprinkled into some of the more boom-bap songs, like “I Want Love” and “Hooked.”

Although Allo’s set was super up-close-and personal, which I loved, I couldn’t help but feel she didn’t do some of her bigger songs justice with such a small band.

The album versions of “Yellow Gold” and “People Pleaser” sound rich in production with a variety of instruments bringing these tracks completely to life. The live versions that night, while still good, were lacking the extra punch from the album—almost like they were stripped of their full musical power.

At the end of the day though, her performances made for a solid, all-around feel good show, and you could tell the audience was vibing with the ever-graceful Allo every step of the way.

Ms. Allo left the stage around a quarter to 9 p.m. to a very pleased crowd who sent her off with a long round of applause.

People began to disperse from Cesar Chavez Plaza shortly after and seemed glad to have caught a free glimpse of the soulful Sacramento native right before her career truly takes off to a whole new level.