Any Way You Spin It 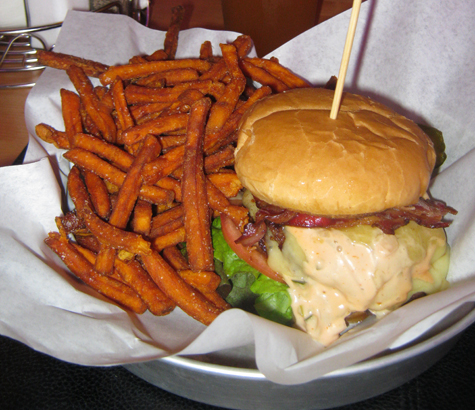 They say you are what you eat. Over the past year or so it has not gone unnoticed that Submerge’s “Refined Tastes” has dedicated much space to the almighty burger. It’s not that we favor burgers or establishments that serve them, it’s that Sacramento continues to turn out press-worthy product. And hell, we don’t mind eating them.

The newest addition comes from the closing of Bistro 33 that was located on the corner of 16th and K streets. The once-popular SRO-operated business wasn’t enjoying the success that the Haynes brothers originally envisioned, so they decided to close the doors and start from scratch. For months, white sheets of paper with black images of bicycles lined the windows and the logo read, “Spin Burger Bar.” The popularity of bicycle-themed restaurants is evident here in Sacramento and curiosity loomed as to what they would do differently.

For starters, Spin is a burger bar. Menus are glued to old 12-inch vinyl sleeves and the drinks menu slides out–very clever. Chalk paint covers most of the walls, and patrons are welcome to add their own artistic flair. Above the bar, bicycle wheels are mounted and strung together, and a crank at the opposite end keeps them spinning in perpetual motion. Venture to the back corner and you’ll find track bikes mounted on rollers for the purpose of Gold Sprints that they hold every Wednesday night at 9 p.m. for prizes, or daily if you just want to school your friends. Kudos for creativity–but how’s the burger?

The Spin Burger is an 8-ounce, “specially blended” patty that you can build your own way. There are a staggering number of choices, from the cheeses to the toppings to the sauces, and a few are real conversation starters. Want some mac ‘n’ cheese on your burger? How about brie cheese or pomegranate ketchup? All the basics are there too: bacon, avocado, grilled onions, etc. The possibilities for putting together a really amazing burger are all there, but there’s also the potential of creating something like a Captain Crunch sandwich, so choose carefully. I went with cheddar and pastrami and played it safe with Spin’s special sauce, a thousand island of course. Techniques vary for putting away a burger of this size, but I prefer the cut-in-half, which never seems to fail. Except this time. I got about halfway through and the bottom piece of my bun completely fell apart, leaving half of my burger almost inedible. I tried to blame my cutting skills, but the first bite told the whole story. Forgive me for using a clichÃ© food writing term, but the bun was spongy. If you get only two things right with your burger, it’s got to be the patty and bun. One out of two ain’t bad, because the patty was delicious as was the pastrami that was generously piled on. Hopefully it’s just a kink that needs to be worked out. 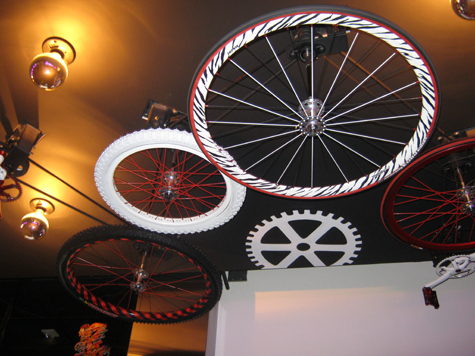 Fries are extra but it was totally worth it when I saw the heap that accompanied my burger. They also have sweet potato fries, which are my personal favorites. I came back for a second visit almost for that fact alone, but also decided to attack another burger on the menu that I learned is served on a more “standard” bun. The fresh-tasting, perfectly toasted bun is what contributes to making burgers like that of Formoli’s Bistro or The Golden Bear some of the tastiest in town. Spin has the ingredients to compete, and I tasted it when I tried the “Double D,” which featured two patties, two slices of American cheese, lettuce, tomato and Spin sauce. In fact, I made quick work of it and almost ordered another.

The service was great. The bartender Kate was pleasant and informative, and my food came out quickly. The beer selection includes local brew Monkey Knife Fight from Rubicon and each day of the week has a clever name like Fat Tuesday and Widmer Wednesday. During their happy hour, 3:30 to 7:00 p.m., enjoy $2 pints of that theme beer. Look out for an additional happy hour being added during Gold Sprints on Wednesdays. A word of advice: heavy cycling and copious drinking might lead to…well, watch from a distance.