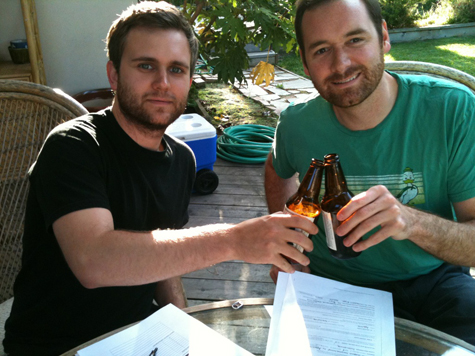 Local musician Teddy Briggs (aka Appetite) is teaming up with Davis-based Crossbill Records (home to Sea of Bees, Jake Mann + the Upper Hand and other great artists) to officially release his album Scattered Smothered Covered produced and recorded by Raleigh Moncrief. “It is the official release of the CD-R I passed around last fall,” Briggs said. He pointed out that it’s been re-mixed, though, and that “a few things have been re-recorded or added to previous tracks,” and that “two new tracks will be added to the record.” He mentioned that the track order has also been re-arranged and that a third new song, or “bonus song” as he put it, will be added to the digital release of the album, bringing the track totals to 10 on vinyl and CD, 11 on the download version. Of his relationship with Crossbill owner Michael Leahy, Briggs said, “Michael is a good friend of mine; we go way back, maybe six years. We first met when we were both working at KDVS in Davis as radio DJs. He has been very supportive and encouraging of my music. He really loves music, and he is in it for all the best reasons.” Briggs has assembled a new live band lineup that includes some “familiar Sacto music scene contributors,” including Carson McWhirter (Everybody) and Jesse Phillips (Ellie Fortune) on guitar, Addison Quarles (Chelsea Wolfe) on bass and Sam Coe (Sea of Bees) on drums. Look for a mid-August release of Scattered Smothered Covered and also look for this newly formed lineup to perform around town throughout the summer. Keep an eye out at Crossbillrecords.com and at Appetitemuch.tumblr.com