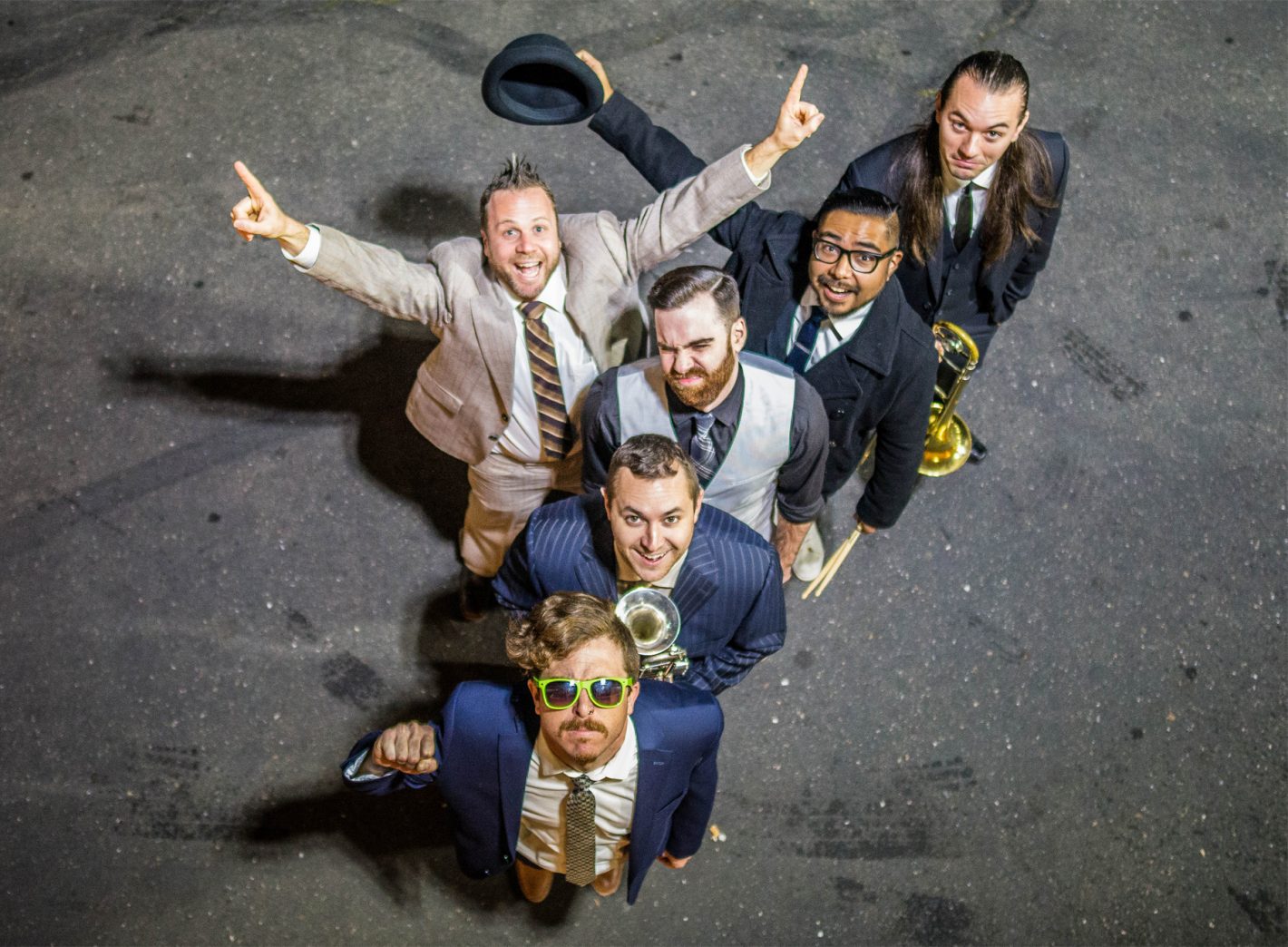 The Sacramento area has a large and diverse punk scene, with styles ranging from pop punk to folk punk to hardcore. But from time to time, the local music scene becomes permeated by a handful of bands who are playing another exciting and danceable sub-genre: ska punk.

One of these local bands is ska/skate punk group At Both Ends. The band has been playing together for almost three years now (their anniversary is coming up in September), and they recently celebrated the release of their new album Wheel’s Out the Window with an energetic and heartfelt album release party at Cafe Colonial. At Both Ends has put out a short EP in the past, but Wheel’s Out the Window is their first full-length album, and it takes a more upbeat and eclectic direction than their previous release.

The new album was recorded in Sacramento at Pus Cavern, and is distributed by Morning Wood Records (a small punk rock label based out of the Netherlands), as well as online. Wheel’s Out the Window captured the attention of ska and punk publications around the United States, and the album has also been warmly received in Germany, France and other parts of Europe.

I caught the band’s set at their album release show, and I was struck by their uplifting lyrics, driving drum beats and vibrant horn section. Catchy vocal harmonies give way to epic guitar solos, and intricate instrumental switch-ups will keep you on your toes. The group dances and leaps around the stage while they wail on their instruments, and as a member of the audience it’s hard to stand still.

I had the chance to talk to singer/guitarist Gene Mansour and singer/bassist Sean McCobb about their new album, things they’re looking forward to and the serendipitous way that the band was started. 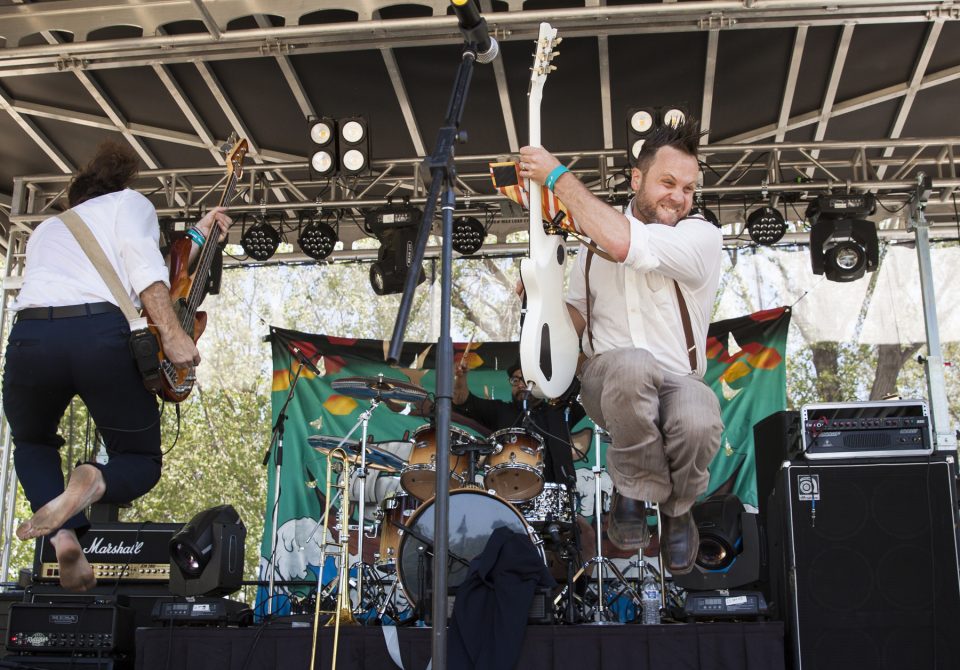 Tell me about your band name. What are you guys at both ends of?
Sean McCobb: Everything.
Gene Mansour: We are at both ends of a whole bunch of things. Like the spectrum of punk.
You know, going from ska to kind of metal at times. At Both Ends is burning the candle at both ends, in my life and in the lives of a lot of the other guys in the band. I have a full-time job and a full-time family, a wife and three kids, and we’re still cramming in the band, organizing tours and living life to the fullest! Life’s too short to not burn the candle at both ends, that’s my perspective on it.
SM: We like to have two very wide perspectives and make them run into each other, so that what we create is different, hopefully, than things before.

How and where did you guys start At Both Ends?
SM: There was this guy named Dan.
GM: Dan initially sent out a Craigslist post asking for a bass player. I liked the idea of why he was forming a band, so I said, “I don’t play bass guitar, but if you need a second guitar, I’ll play with you.” And he got Junior [Onesimo Martinez, Jr.], our drummer, and Sean, who’s a bass-player and trombonist, to come and jam with us. Dan just never turned up after the first practice. We just kept playing. Then we added to the band. Now Jason [Eldred] is playing lead guitar, and George [Brahler] plays with us on trumpet.

Where is everyone from?
SM: We all live in Sacramento right now, but only Jason is actually from Sacramento.
GM: I’m from Australia, Junior is from Orange County, Sean is from Rancho Cucamonga and George is from Kansas.

What was a pivotal experience that made you realize you wanted to play ska music?
SM: I bitched a lot. I just complained until we started playing ska music. That’s how I remember it, I could be wrong.

Do you have a message in your music? What type of change would you like to see globally, and how do you think your music ties into it?
SM: When At Both Ends started, I wanted to bring freedom, and I’m kind of an anarchist, and I wanted to spread that. But I really eventually saw that spreading happiness was kind of cooler. So that’s where I’m at now. I want to make music that makes people happy and dance.
GM: The vibe of the music is definitely about happiness. From my perspective, a lot of what I write is about people taking initiative for their own life. I don’t like the idea that people have to look for someone else to blame. You need to take initiative for your own life. That’s what a lot of the songs end up being about, when I write them. A lot of the meanings and the words are about that. But as a whole, I think that Sean hits the nail on the head, saying that we want people to have fun. Particularly when they come to see us play live. We want them to have a good time.

What direction does the style of music take, in comparison to what you’ve done before?
GM: The style of the album took us more down the ska avenue. The first EP was very much fast, melodic skate punk, with a little bit of ska thrown in. [For this album] we incorporated more songs that are ska, while still retaining that fast, melodic [punk] undertone throughout the album. I suppose that we became more ska. We brought the trumpet player George into the band before this album, and we added more horns to the mix as well. So that was kind of the direction that we headed down on the album. And I think our songs became a lot more dynamic as well.
SM: Our music [on this new album] is much more technical than on the EP.

Are you working on new music, now that your album is complete?
SM: We got so many songs in the works. I’m making a driving effort [to make it so] that everything I produce is a really spliced version of ska and punk. So, [the songs are] not [structured] like an offbeat verse with a downbeat chorus, but in a single part of the song you’re going to hear both things. We switch back and forth between the upbeat and downbeat. 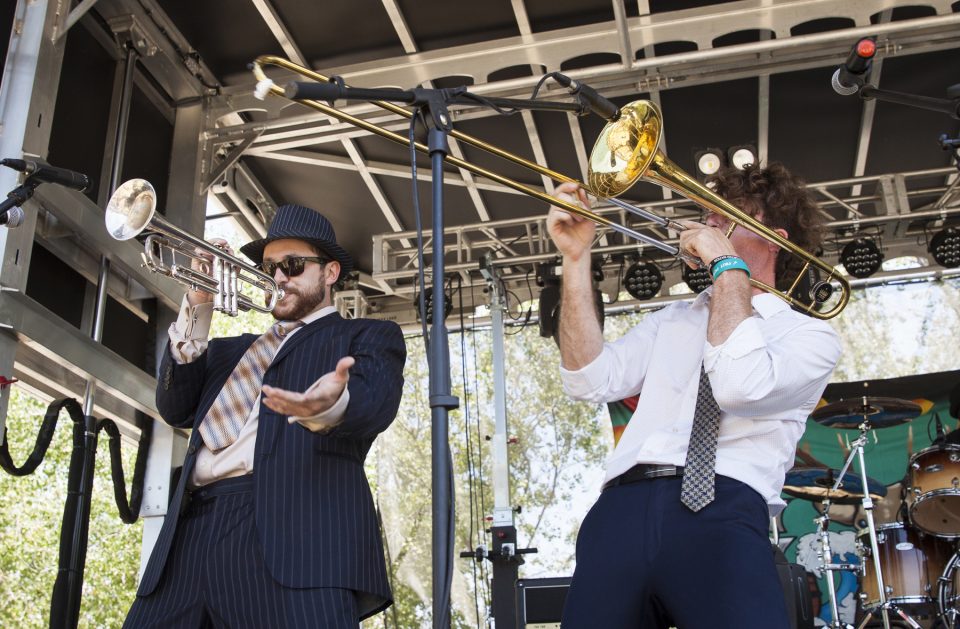 We already touched on this a little bit before … You want to inspire people to take initiative in their own lives, and to go out and make things happen. My next question is this: What type of knowledge do you think people should study in order to facilitate the evolution of our species?
GM: Woah, that’s deep. You do realize that you’re speaking to a bunch of punks right?
SM: I think people should learn how to understand how they impact everything else. You play an infinite role in everything else that goes on in the world, so if you consider that and make small choices every day that are better for everybody, I think that would help our species progress.
GM: My opinion is that people need to look at evolution itself: how the human species progressed from caveman to what we are now, and where we’re at with evolution. I think that evolution itself now has come to point where we’re not evolving. It actually may be a negative evolution. Like Sean said, people are no longer looking at the big picture, they’re only looking at themselves. And if you don’t look at the big picture, you miss out on the important stuff. You need to try to be open-minded, and keep learning about everything. If you don’t, you’ll revert and become a part of the negative evolution. You will not propagate your species.
SM: Also, people need to understand how energy is produced and how food is produced, and how those things are interrelated. It’s important to understand how much energy we’re consuming, not just with the lights that we turn on, but with everything we do. For example, things like soda take so much energy and resources from the world, but soda is really bad for people. Think about how much energy is used to do that, and it doesn’t have a positive result. We waste a lot of resources producing it.

What are you most looking forward to as a band?
GM: Oh, we can’t reveal that just yet. Something in the near future!
SM: [Laughing] Oh man, I almost said it right off the bat!
GM: I know, that’s why I cut you off, Sean! [Laughing] But currently, we’re heading on a mini tour down to Southern California … We get to play with the absolute champion band Lowbrow, and some other bands that are champion bands down there.
SM: Lowbrow is amazing. People should listen
to Lowbrow.
GM: Check them out. Radical music. It’s pretty exciting. But every show … I’m definitely excited for every show we play at. I think it’s an absolute honor and privilege to get out and play music in front of people. And to have at least one person dance, even if it’s Sean … That does something for me.
SM: I’m really excited about making new music. I like the writing process, and we decided to take a break on that for a little bit, so I’m really excited to get back into that. That’s not what I was going to say first [laughing], but that’s an answer.
GM: We will reveal such news soon.

See At Both Ends in Sacramento on Friday, July 7, 2017, at Old Ironsides with The O’Mulligans, Jesus & The Dinosaurs and Captain 9s and the Knickerbocker Trio, and on Saturday, July 8, 2017, at Cafe Colonial with Dan P. and the Bricks, Skasucks and Rebel Radio. Their new album Wheel’s Out the Window is available for download online, or you can order a CD from Morningwoodrecords.com. Stream the album via the Bandcamp player below.