Young For the Night : Autumn Sky

“I’m impervious to danger,” jokes Autumn Sky, recalling a sketchy gig she played once at a dive bar in Oakland.

Sky recalls embracing the back-and-forth of the audience and meeting a homosexual couple who continue to attend her shows today. Meanwhile, Barry Crider, her roommate and guitarist, remembers it slightly differently. He doesn’t remember the personal stories of the patrons; instead, he recalls fox-guarding the equipment while Autumn used yet another mediocre gig to propel her name and band recognition forward, and then leaving after a short conversation with the German Shepherd-wielding bar owner.

That name recognition is working. Sky, who began gigging solo, has always envisioned her music with a full band accompaniment. After some 11 years, this desire is finally being fulfilled; at the end of the month, Autumn Sky, along with her current lineup of bandmates, will release the Scout EP.

The EP is a quick glimpse at the depth and potential that Sky and her band embody. The songs have precursors and references, some of which include Death Cab for Cutie, Florence and the Machine and bits and pieces of singer-songwriters far and wide. At its best, Scout contains a layered dynamism which is both lush and cathartic; at its worst, it’s too short.

Sky, guitarist Crider, and bassist Anthony Medina sat down with Submerge to discuss the release, the worst gigs ever, LSD, “bad” hippies, death and philosophy—not necessarily in that order. 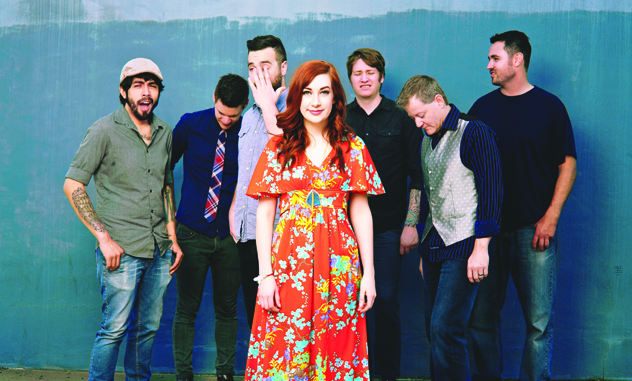 You’ve been playing solo for a long time, why the shift to a band?
Autumn Sky: The songs are always meant for a band. I don’t want to use anybody. I don’t think it’s appropriate to ask my friends to give their time or their music to me, when they have good music of their own, unless I can get a guarantee. So I focused on building my fan base and my reach. Then I was eventually able to start trying out musicians. That took a long time. I think I went through four bassists and five drummers, and they were always in other bands.
I would often try to make up for the fact that there wasn’t a band with enthusiasm, or I’d play my guitar really hard. I’ve known this entire time this is what I’ve wanted. It’s great to have friends who want to support your music. It feels exhilarating.

What’s the worst part about playing with a band?
AS: I had a really hard time adjusting to learning and knowing how to talk to people, to give any criticism. I had this thing where I didn’t want to be mean to people. There’s gonna be a point, if you’re a band leader, where you’re going to have to fire someone.
Anthony Medina: Just getting everyone together is hard, especially with seven people. When we’re getting ready for a big show, trying to get in just two practices a week is almost impossible.
Barry Crider: Some of us are in other projects as well.

You have a lot of songs. Why do you write so much?
AS: Other people have ADHD, and my tick is that I have to keep writing music. I’m always singing to myself. I’ve been writing songs since I was 6. I used to sing to myself when we were doing chores in my house. We were homeschooled according to the theory of Romantic Naturalism; we were really bad hippies. Every time I had this ear worm stuck in my head, I’d write it down. My parents encouraged me.

For the band: does Autumn have Lead Singer Disease (LSD)?
BC: When it’s practice time or show time or anything where gear has to be loaded, Autumn is always getting ready doing her makeup, and I’m hefting the PA speakers down the stairs, loading the guitar amps. She finishes and comes out of the bathroom, and says, “Can I help you bring anything to the car?”
AM: I see this at the end of practices. She’ll be chit-chatting, and we’ll be tearing everything down.
BC: Then she puts her acoustic guitar in the case.
AM: One time we had loaded everything, and we started talking. Then Autumn was like, “OK let’s go.”

As a female singer-songwriter, what are some of your horror stories?
AS: When I first started playing I got asked to play a lot of women’s shows. They’re like, “We have Women’s Night
on Wednesdays!”
BC: It sounds like the suffrage era of music nights.
AS: I get a lot of people who think that I just play ukulele because there’s a picture of me holding one on the Internet. I get a ton of people who list me as Autumn Sky, ukulele player.

If you could kill a rock star, who would it be? You can end a career or legitimate it here.
AS: Miley needs read some books on feminism, but—
BC: Insane Clown Posse.
AM: Careful…
AS: You know what? Selena Gomez. It’s like her management is like, “Hey, Britney Spears would be a good path for you.” Come and get it: way to stir on your stalkers. I’d kill Selena Gomez for her own safety.”

If the band were the cast of Lost, who would each person be?
AS: I want to be Hurley. Everyone loves Hurley. He was the only one who was always nice to people, consistently nice.

OK, but who would the band describe you as?
BC: The Matthew Fox guy, Jack. The survivalist guy, [John Locke] I might have some personality traits like him.

Which philosopher would you rather read: Hegel, Marx or Mary Wollstonecraft?
AS: Hegel and Marx.

How will the revolution happen in the United States?
AS: The poor will get so fed up with the huge gap between the rich and the poor that we will eventually have to restart ourselves.
AM: The rich will get pissed off at the poor people complaining.
BC: The doomsday militia, all the gun hoarders will start factions, some rebel uprisings—not like Star Wars.

Since musicians are poor, what’s your richest moment?
AS: We’re like Little Women; we value our friendships because we have no money. Once, I showed up to this gig. I thought I had a $300 guarantee; they said they didn’t know I was coming. They weren’t set up. So they said I could eat for free from their four star restaurant. I thought, “I am gonna eat for free.” So I sat there and ate lamb racks, their barbecue, their best wine, all their truffle macaroni and cheese—they put truffle on everything, truffle this, truffle that, truffle popcorn.

Will your upcoming full length include completed music videos and be released inconspicuously on iTunes?
AS: I am Sacramento’s Beyonce, so…

Catch the release show for Autumn Sky’s EP Scout on March 29, 2014 at Assembly, along with Cold Eskimo, Contra and Life in 24 Frames. The all-ages show starts at 7 p.m.; tickets are $10 in advance, $12 at the door. Visit Facebook.com/autumnskyofficial for more info.