What could be sadder than a 38-year-old man going to a Backstreet Boys concert by himself? Well, to be honest, probably a lot of things. For instance, that last copy of Zoppi’s Suspended CD that remained untouched at The Beat since it was released in 2000 is pretty heart-wrenching. And images of the abandoned Ferris wheel at The Neverland Ranch are downright depressing. So, I dunno, there are things.

But here’s the weird part: Right when I heard Backstreet Boys were coming to Ace of Spades (and that the show was sold out), my first thought was, “I need to cover this” without even questioning for one second why in 2013 I would actually want to see the Backstreet Boys. And even weirder: After a bit of thought, it dawned on me that I don’t know any of the members in the Backstreet Boys. And the only song I can recall is the one that goes, “Backstreet’s back alright!”

Which is when my existential crisis kicked into high gear.

“Why?” I thought. “Why would I beg to review this concert? What is the point? Why is this band important to me if I don’t even know the members or any of their songs?” Even more difficult to understand was at the end of every question came only one answer: BACKSTREET BOYS. It made no sense that I could think no further than that, as if my mind was somehow clouded by their stardom.

Why do I want to go to this concert? BACKSTREET BOYS.

Who are the members of Backstreet Boys? BACKSTREET BOYS.

What is the … BACKSTREET BOYS.

It’s like a satanic curse that landed me in a hellish underworld of dramatic finger pointing, waxed male nipples and stylishly choreographed dance moves. 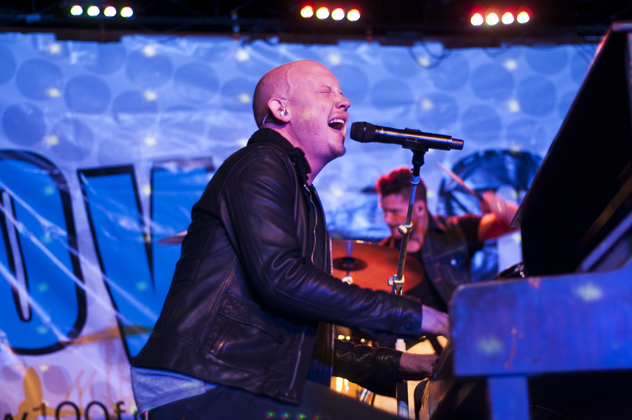 A band called The Fray took to the stage at 8 p.m. I actually listened to a few of their songs before seeing them live—enough to determine that their whitebread form of rock ‘n’ roll sounds like music a menopausal woman might listen to right when she says, “Fuck it,” and tries heroin for the first time. The Fray went on for an hour-and-a-half. A long, grueling hour-and-a-half that I mostly spent standing next to Mark S. Allen, analyzing his beautiful and flawless face. If that ageless man isn’t handsome I don’t know who is. Anyway, the most interesting part of The Fray’s set was when two bleached blonde soccer moms fistfought by the bar.

When the Backstreet Boys (there are five of them, I learned) finally took to the stage, my life force had been uncomfortably moistened by The Fray’s steaming pile of music. However, I was quickly intrigued by their presence. They looked healthy and spry, like a boy band should. And their voices, while a little on the low end and muffled by the loud backing tracks (yup, no live band), sounded competent enough. They hit their melodies and demonstrated complete control of their voices (let’s be honest: not even Lauryn Hill can do that anymore). And all that while dancing in tight pants.

After a few classics and a performance of their new song “Show ‘Em (What You’re Made Of),” a surprisingly sparse and catchy single, Nick Carter announced that the Backstreet Boys aren’t just a boy band. “We can play instruments, too,” he said, which took us down a long, boring road of acoustic pop songs.

To be honest, all their songs sounded the same, but I sort of enjoyed standing there in that fog of Axe Body Spray, watching good-looking people sing and dance—if only for the change of scenery. It was certainly a change from watching death metal bands while standing in a crowd half-filled with methed-up neo-Nazis.

Halfway through the Backstreet Boys’ set, I felt the tip of a fingernail grinding into my shoulder. It was a woman, probably in her 50s, wearing an obscene amount of eye shadow and blush.

“Hey, you need to move because I’m trying to keep an eye on my daughter,” she said.

“I’m trying to watch my daughter,” she shot back, pointing to the teenage girl in front of me.

“If you cared about your daughter you’d leave the bar and stand with her,” I said.

“How dare you?” she yelled, as if nobody had said no to her in her life. “Why won’t you move?”

I grinned, because the answer, of course, was BACKSTREET BOYS.