The Ties That Bind

Baskery proves the family who jams together, stays together

There’s a certain power that comes from a family band. There’s a strength to their presence on stage; the perfectly parallel harmonies and eerily cohesive movement through songs projects a resonant connection that feels nearly palpable to an audience. It can’t be easy to share that much, but it certainly helps the music and has the benefit of being a bond that started forming long before it was a focus. Such is the case for Greta, Stella and Sunniva Bondesson, a Swedish three-piece alt-country group by the name of Baskery.

“It’s so hard to find a starting point of the band, because some of the songs that we play up to this day are songs I wrote in high school,” said Sunniva Bondesson, the youngest sister in Baskery. “It’s hard in the sense that you can’t see an end or beginning of things.”

The three sisters have been singing together since their childhood and came together first through the group the Slaptones, formed along with their father, drummer Janåke Bondesson.

After a few years, Janåke decided it was time to leave the band and that the sisters should find their own focus as musicians without his influence. This led to the formation of Baskery.

“We [Slaptones] were pretty successful but we didn’t want to play rockabilly and cover songs, so we started Baskery as a new challenge,” Bondesson said. “We call it our first real band because Slaptones was more of our fun project, we didn’t get that serious. We made two records and it was great fun, but we felt we needed another concept for writing the kind of songs we wanted.”

The name Baskery came about from wanting to acknowledge their roots, which lie in the small village their father is from. The town is nicknamed “Baskeri” in Finnish, but the sisters decided to change the spelling to have a more international sound.

The name’s versatility coincidentally reflects the music itself. There’s a sweet melodious harmony factor that lends itself to bluegrass influence, with a more rapid kick that’s reminiscent of punk tempo, plus instrumentation and a sort of group effort that comes from the communal feel of country music. Maybe their hyper breed of sound partly stems from the fact their influences are less music-based and more found through common past experience.

“It’s not so much music, it’s more movies, books, stories that you come across in your regular lives,” Bondesson said. “We have the pleasure of sharing lots of influences since we’re sisters. We have the same references because we grew up in the same house at the same time, but it’s not a lot about music. As kids we sang a lot of classical tunes, folk tunes, and our dad played blues and folk and country and rock, so we had all kinds of influences, that’s why it’s so hard to tell. We’re infused with so many different genres.”

The idea of working with siblings might make a few people uneasy. Working in groups is hard enough. Luckily, it’s something that comes easily for the Bondesson sisters. They’ve found a way to separate their work from their family dynamic.

“We’re pretty blessed in that sense that it doesn’t really influence our structure as a band,” Bondesson said. “When we work together we have a different hierarchy, the songs and the music itself is kind of the ruler. I always kind of curve myself under the power of the music. Even if we had had a fight or something it would never show on stage because that something else comes in and takes over. Also how we’re structured there are certain roles in the family of course and being three sisters, but we don’t have these structures in the band. We have different positions and they happen pretty organically.”

As far as the work itself, everyone naturally takes on flexible responsibilities, with an ebb and flow of who is taking a leadership role. The positioning is constantly shifting, from stage presence to songwriting to business logistics.

“We try to look at it as a democracy,” Bondesson said. “The work share is happening very naturally, we don’t really talk about it, and some days you decided you do more and some less, we don’t really complain a lot about that.”

The three sisters have been living together for the last several months in Nashville, coming together in one home for the first time in a decade. A city as musically established as Nashville can be an incredibly hard market to enter, but so far Baskery has received a good amount of intrigue from listeners.

“People are kind of overfed with music there,” Bondesson said. “We have the pleasure of being different and we peak out, because we don’t make the traditional country music, or we don’t fit anywhere, so people have already started talking about us.”

During this time they’ve been working on new material, working toward releasing a new album here in the United States, touring consistently and playing countless festivals, including the upcoming American River Music Festival. It’s been a blessing for Baskery to help connect to the North American audience through festival appearances, as well as find a community by crossing paths with other artists performing, and learning from their shows.

“Festivals are essential for any band to build their new audience and earn recognition,” Bondesson said.

With little sense of the sisters’ true musical beginning and no end in sight, what’s left is the present, which Baskery has devoted to working as one.

“That’s something you refine a lot when you have time to really only work with music,” Bondesson said. “We’re on the road two thirds of the year, and we’re constantly together; sometimes we have a little time off too, but mostly we’re on the road, and living together now. It’s definitely making the unit stronger. We have found this common way to express ourselves. I think our sound is more refined than ever. It’s definitely an advantage to do this, and I’d recommend other bands if they can to get more time to live together and get the music, make it a part of everything you do.”

This year’s American River Festival takes place Sept. 12 through 14, 2014 at Henningsen Lotus Park in Lotus, California. Sharing the main stage with Baskery (who perform on Sept. 14 at 12:15 p.m.) will be Bastard Sons of Johnny Cash, Whitewater Ramble, The Bills, Tommy Malone of the Subdues and more. For a full schedule and camping particulars, go to Americanrivermusic.org. Baskery will also perform the night before their main stage performance, Sept. 13, at the Sierra Nevada House at 8 p.m. 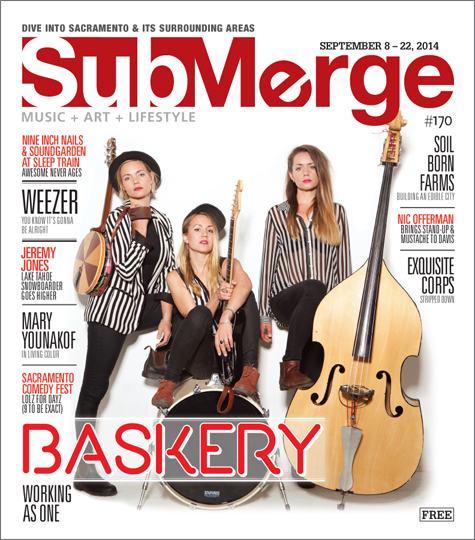