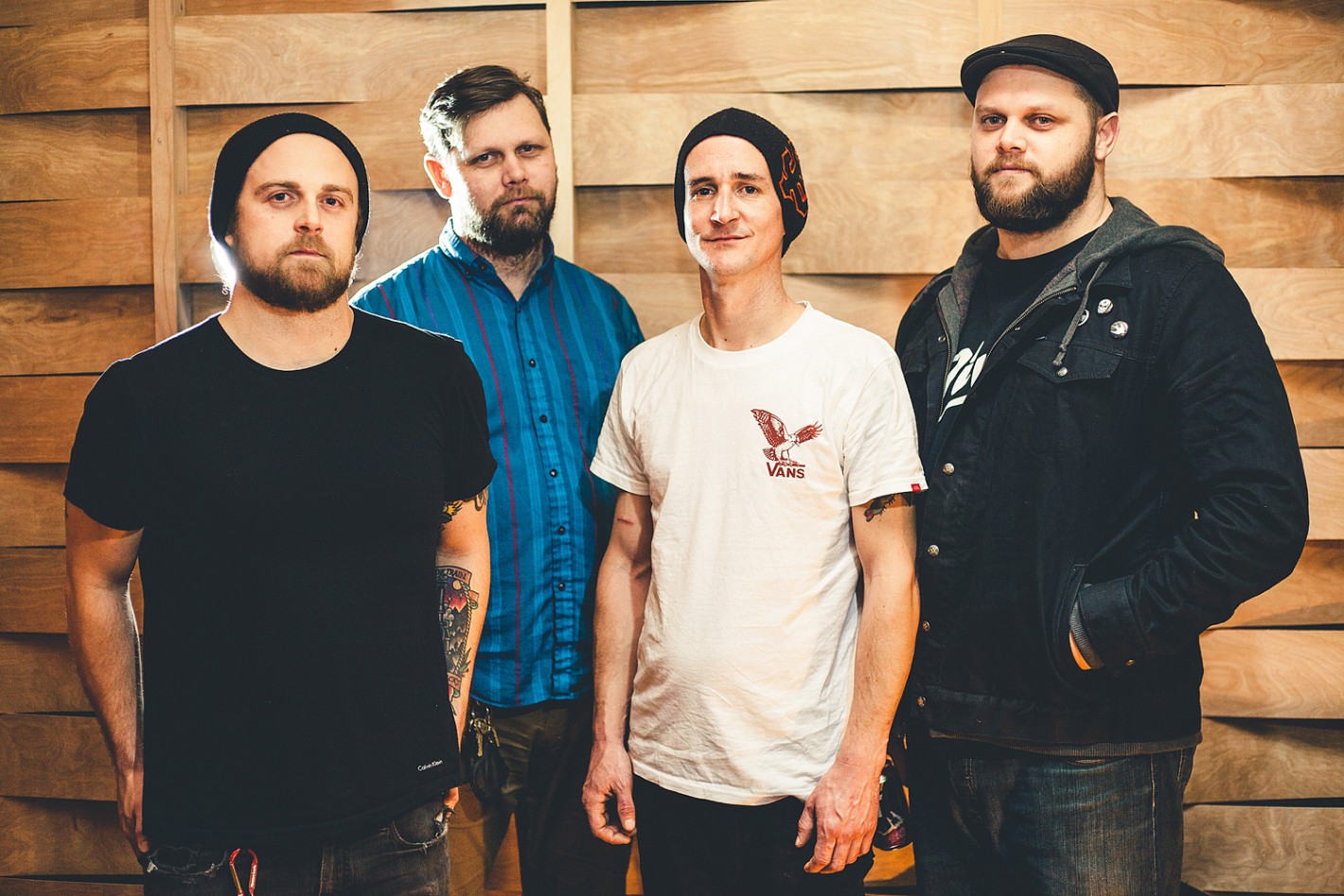 It was 5 p.m. on a Friday and the members of Sacramento’s Bastards of Young were packing up to drive west for a show in Oakland. I had spent the previous three days under a heavy and horrible blanket of the flu, and I was still in the thick of it. I woke up from a nap a few minutes before our scheduled talk and leaned against the base of my couch as I dialed the band on my iPhone.

I’m familiar with Bastards of Young’s music, but at the time of our interview hadn’t yet listened to their soon-to-be-released record, White Knuckles. They had sent me a private streaming link several days prior, but I had not yet clicked it. Having been knocked out by a 102.5-degree fever and an array of subsequent symptoms, my struggling body was on a reprieve from punk rock. I was on a diet of silence and Seinfeld reruns almost exclusively.

It’s entirely unprofessional to not listen to a band’s record before interviewing them, but in the end, I’m good with the decision. That’s because on the day in which I wrote this story, my first day truly back in the saddle, I was able to take the whole album in with a clear head, and I’ve let it loop at least nine times in the hours since that first listen.

If, hypothetically speaking, you were to have spent five days shelled up in your home quietly eating chicken soup and lime popsicles, White Knuckles is precisely the tool you would want to crack open the nut and re-enter the real world with some legitimate momentum. It’s sturdy, anthemic and positively bold; a solid album for the springtime, when dead things snap back to life. In my case, it’s what the doctor ordered.

On “Never Catch Me Girl,” you can hear a bit of Bouncing Souls, although it’s spiked with a gravel and growl akin to Hot Water Music, a clear Bastards of Young influence. “Mary” and “Yankee Bluejeans” are two other standout tracks—catchy punk songs that carry a contemplative tone, but mostly just get your blood moving.

“Like Nails on a Cross” slows things down, trading the high-energy crowd shouting for pure melody and harmony. You could tuck the tune nicely into an Alkaline Trio record, and yet it’s uniquely Bastards of Young.

In the band’s early days, guitarist Nick Ripley wrote and sang the bulk of the songs. White Knuckles is the first record on which he and Patrick Hills, the band’s other guitarist, split the vocals and songwriting evenly.

“For the sake of variety and diversity, it makes for a more interesting sound,” said bassist Sean Hills. “It wasn’t anything we talked about. Pat just started bringing songs to the table and it worked out. We’re really lucky that we have two strong songwriters.”

Bastards of Young will have CDs and digital downloads of White Knuckles available at their upcoming show with 7Seconds at Blue Lamp on April 7, 2016. A week later they’ll head south for a short tour that ends with shows in San Diego and Tijuana for La Escalera Fest, an annual festival put on by the band’s record label, La Escalera Records.

Over the course of a phone conversation and a follow-up email thread, the members of Bastard of Young discussed the band’s history, the upcoming tour and the process behind White Knuckles.

When and how did the band come into existence?
Patrick Hills: When Hanover split up we got together with Nick and started writing songs. We played our first show about nine years ago and somehow we’ve managed to maintain the same lineup the entire time.

Did you guys grow up in Sacramento or the suburbs?
Sean Hills: We all grew up on the outskirts of town. Patrick and I grew up in Rocklin, Nick came from Newcastle and Wyman used to live out in the Marysville area.

Where do you guys live now?
Nick Ripley: We all live and work in Sacramento now. Mostly because the suburbs are boring.

How and when did you guys end up on La Escalera Records?
PH: We met the guys who started La Escalera a long time ago on one of our first trips down to San Diego. When they started the label six years ago, we were one of the bands that they included on their first release, a split 7-inch with our friends Success from Seattle.

La Escalera Fest is split between San Diego and Tijuana. What can you tell us about that?
Wyman Harrell: La Escalera Fest is an annual event that features many of the bands on the label and their good friends. It’s basically a big party with great music and barbecue. The label has been booking shows in Tijuana for several years and since so many of the bands on the label are coming from out of town to play the fest, they decided to book a show down there as well. There’s an awesome music scene in Tijuana. We’re super excited to be playing.

How much from the new record will you play at the 7Seconds show at Blue Lamp?
NR: A majority of our set includes songs from the new album but we always throw a few older songs into the mix.

How does Bastards of Young fit into Sacramento’s punk scene?
SH: The punk rock scene in Sacramento is a pretty small, tight-knit group of people but there’s a lot of diversity, which is awesome. Our music doesn’t really fit nicely into one specific niche, but it’s actually kinda nice because we like to play with different bands as much as possible.

Have the venues/bands/styles changed over years, or does it feel pretty consistent and steady?
SH: Bands and venues have come and gone but Sacramento has always maintained a pretty strong local music scene. Different kinds of music have become popular over the years but we’ve never really let that influence our songwriting. We write music for our own satisfaction and we consider ourselves lucky that other people seem to enjoy it as well.

What do you guys do for a living outside of the band?
NR: We’re pretty much a blue-collar band. Pat does [Earth Tone Studios] and guitar lessons. Others are bartenders and deli managers. As much as we love this band and would love to do this kind of music full-time, we’re also realists. We realize it’s highly unlikely that this will ever pay our bills. It’s kind of an expensive hobby for us that we really love. We don’t do this for money. We’ve been doing this for as long as we have because of our love of playing this kind of music.

What’s the meaning of the album title, White Knuckles?
NR: We’re all getting older and life just seems to be screaming past us at a million miles per hour. There are a lot of obstacles along the way. Many of the songs on the album are about growing up and overcoming adversity. White Knuckles is just a reminder to hold on tight and enjoy the ride.

What was the process of recording the album, given that one of your band members runs a studio?
SH: We tracked everything together when we recorded drums, but we kinda took our sweet time with everything else. Having a studio conveniently available is a blessing and a curse. We couldn’t be happier with the way it turned out, but I think that it took more than a year to finish.
NR: It was kind of a slow process. We compiled songs we had written over a few-year period. When we sat down to record, we did it within a three or four month period.
SH: When we went into record it, we did 18 songs. We whittled it down to what we thought were the strongest of the batch. The new album is our first full length and it’ll have 12 songs on it.

Bastards of Young will celebrate the release of White Knuckles alongside 7Seconds and The Knockoffs April 7, 2016 at Blue Lamp, located at 1400 Alhambra Blvd. in Sacramento. Doors for this 21-and-over show open at 7 p.m. Tickets are $15 and available in advance at Abstractpresents.com.