The Pied Pipers • Be Brave Bold Robot, Once a Member, Always a Member 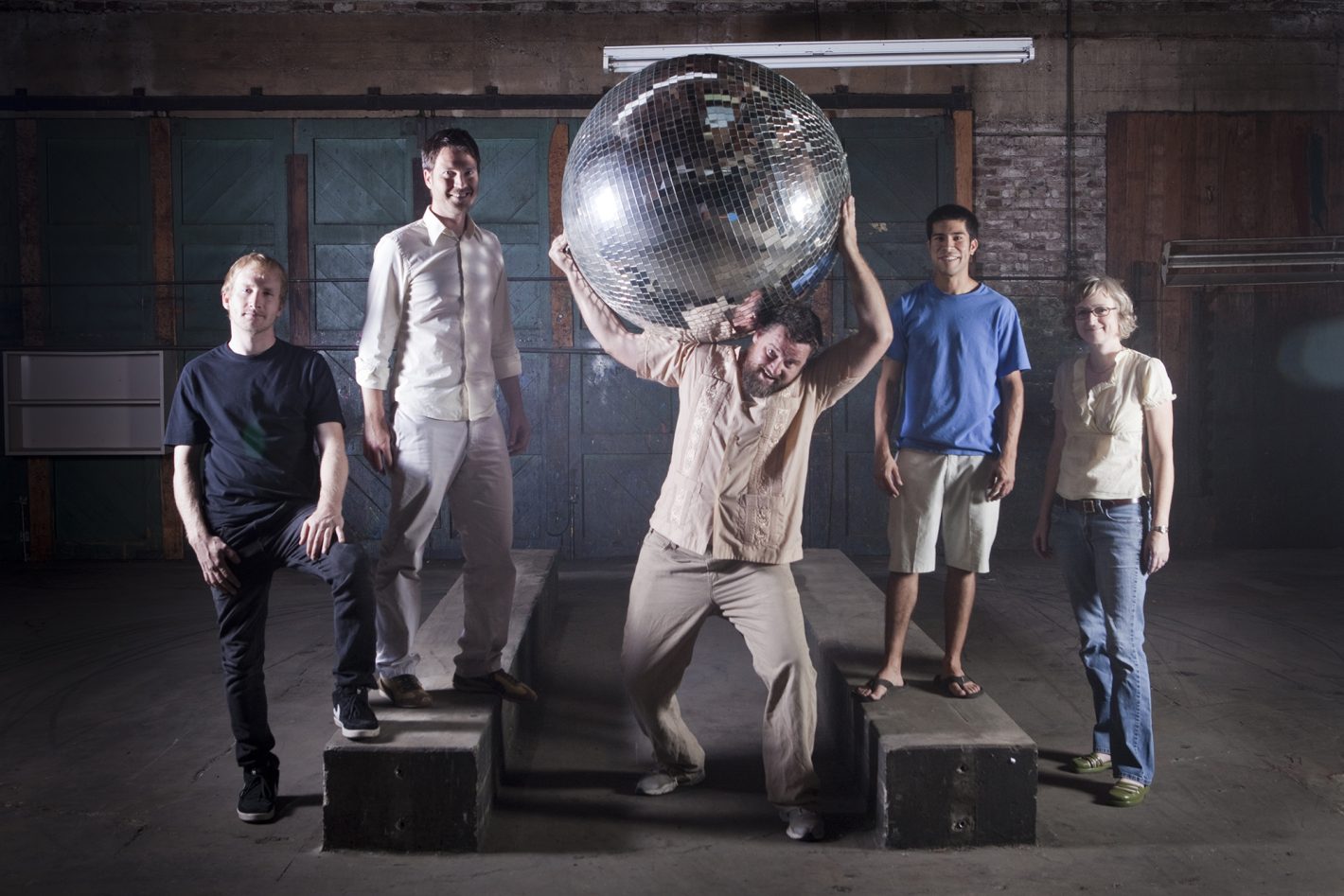 Not many bands sport a badge of longevity inching toward eight years, but plenty of musicians can include their names in the pages of Be Brave Bold Robot’s local history. With roughly 23 former players fondly dubbed “Forever Members,” BBBR is a staple in the folk scene for good reason. If mad scientist, Dean Haakenson, hears you can play an instrument and likes you as a person, you can write your way into his project…forever.

My night with Be Brave Bold Robot did not begin with an unsettling ride to West Sacramento in Haakenson’s Technicolor Volkswagen Bug, but a few points of interest are worth a mention prior to him offering a lift in his shrunken, two-seater Partridge Family bus of a VW. As follows: I snuck into an empty warehouse along with the band and a photographer for a photo shoot. Cut my hand lifting a giant disco ball. There was a potato sack race. Haakenson sweated through two shirts. No one discovered us. No one was handcuffed or fined for trespassing. No vandalism occurred. My palm only bled for a minute.

But in Haakenson’s gutted and rusted VW, I sat shotgun to a man who rolled down the driver side window with a pair of pliers and casually talked of how his car, a present from his mom, stalled regularly as we took the Highway 50 on-ramp headed toward West Sacramento. I thought of the band’s moniker as he shimmied the VW into traffic and it strained its way to the speed limit. Be brave.

We arrived safely to Haakenson’s home, and I was ready for a beer, for there is no finer way to gain a stranger’s trust or settle one’s nerves after relinquishing your own fate into his hands. Haakenson and his drummer Michael Ruiz claimed two of the four mysterious wheelchairs on the back patio–why does one man have so many? The rest of us (bassist Matty Gerken, viola player Catie Turner and saxophonist Jacob Gleason) sat in metal chairs or benches with microbrews in hand. Like all interviews, the awkward phase deteriorated and stories were flung freely, which led to how one becomes one of those Forever Members listed on Facebook. Over the years Haakenson developed a simple criterion: play four shows. It may take four consecutive shows, or it could take eight years, but until you’ve played four you are not an official Forever Member.

“It’s a credit to Sacramento to have so many people I’ve met over a number of years join me,” he said and he was right.

To my left sat Jacob Gleason, soft spoken most of the night, but he was first to share his admiration for Dean that led to joining Be Brave Bold Robot. It began with loving the first self-titled record and led to Gleason “[bugging] Dean enough that he finally started letting me play with him.” Going around the table, Catie Turner joined after seeing BBBR live and striking up a post-set conversation with Haakenson, who upon learning she played viola gave her a recording and let her write herself into the music. She’s been a member since.

“He was like, ‘You should play on my record,’ and I said, ‘You’ve never even heard me play,’” she recalled.

“It’s a Dean thing,” she said. “He’s so hands off. He didn’t know me, didn’t know my playing. It was unlike any experience I’ve ever had with an organized band.”

Matty Gerken offered an anecdote on the BBBR’s rotating cast: “One time we played a show at Sac State and in order to play that show we needed to have one Sac State student in the band. So we brought in Chuck; good student, he’s from Iowa, like me. He had enough parts in the songs to get us qualified to play. He was a member for one show.”

Gerken saw Be Brave Bold Robot play based on the name. He caught a Fox and Goose show, went to an after party with the band, which resulted in him mastering the first record. “I sort of learned all the songs from listening to them over and over while mixing them,” Gerken said. “When Tommy [Minnick] the former bass player decided he didn’t want to play anymore, I said, ‘Well, I know all the songs incidentally.’”

Haakenson’s lackadaisical approach stems from understanding his friends and band mates have their own lives and careers. Without the pressures of commitment, being in a band can always be as fun as it sounds. No one’s government job is at risk, no one’s missing PTA meetings and no one’s on heroin to deal with the pressure of stardom. Members come and go and come back again when they have time or miss the fun of being in BBBR.

“It changed my life here,” Turner said, who hadn’t played in a band since leaving San Francisco. 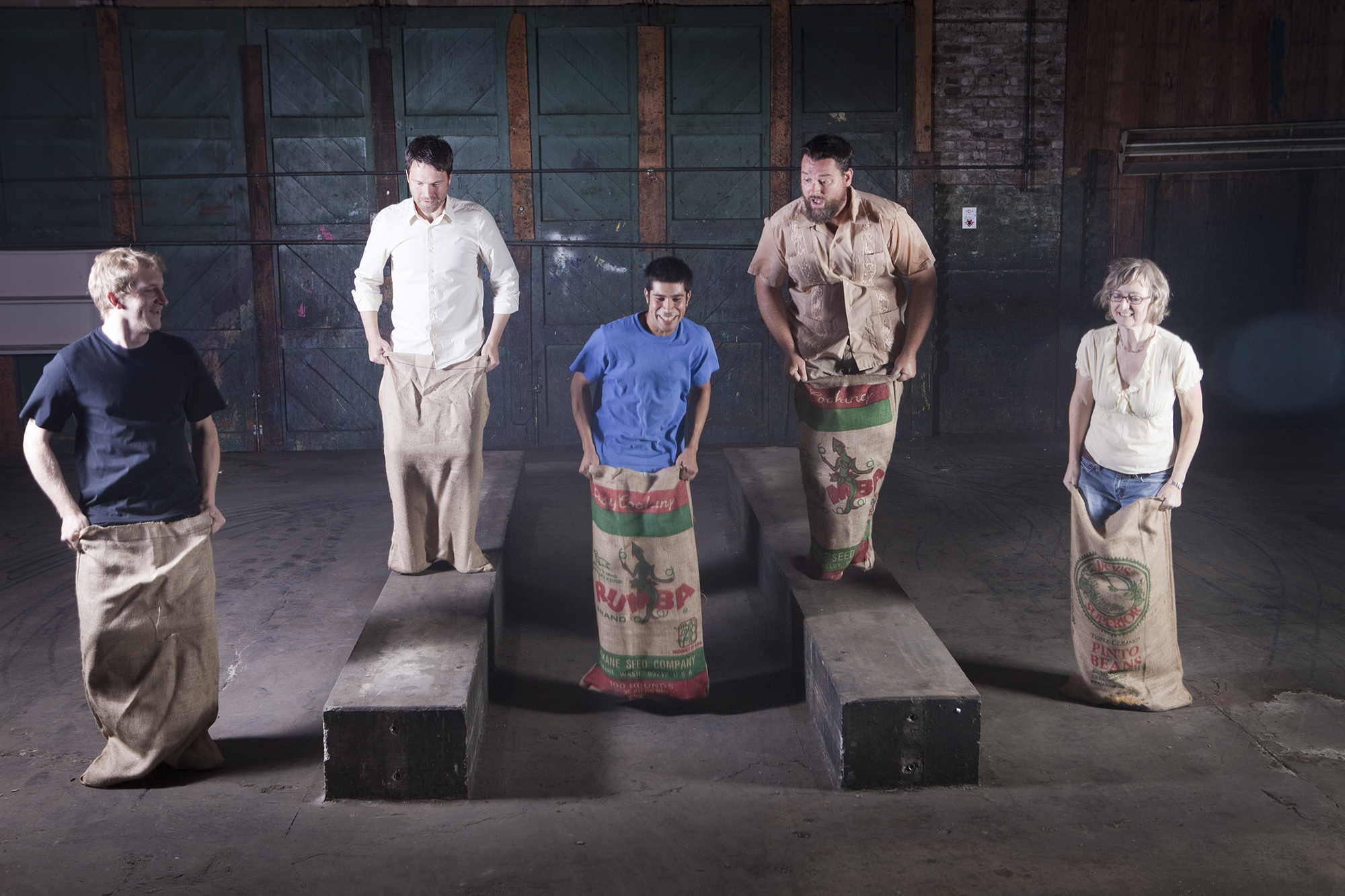 Haakenson exudes gratefulness beyond his once a member, always a member attitude. The tape recorder clicked; side A was over. With everyone in good spirits, we agreed to call it and begin band practice. While guitars were tuned and more beers were emptied into mason jars, Haakenson handed me a copy of 2010’s Take a Deep Breath. He directed me to the living room where the original artwork of Kyle Larsen hung; he had two of Larsen’s pieces. Local writer Josh Fernandez probably doesn’t know it, but he is a cherub muse for BBBR, coining intoxicating limericks that echo through Haakenson’s mind. The new album’s title was partially lifted from Fernandez’s 2008 review, which was recited to me nearly verbatim during our hang out. Fernandez referred to Haakenson as “under a thin sheet of madness,” it led to the title of the band’s upcoming album Under a Thin Veil of Madness.

Under a Thin Veil of Madness began with sessions at Expression College for Digital Arts in Emeryville. “They offer free recordings to bands in exchange for being guinea pigs for their audio recording classes,” Haakenson said. “We went in there for an eight-hour session and got four songs done that are new to this album, and had plenty of time left to record four other songs.”

Going in there was concern of the album being in the hands of pupils, but by the end of their session the band was so close with the students that a kid named Willie Ramsey is doing the Under a Thin Veil of Madness artwork, expanding Dean’s collection of art and adding an honorary band member once again. “I was concerned that we were getting learned on,” Gerken said. “They had an experienced instructor there and it was clear that guy was all business.”

In the eight years of having one of the most recognizable band names in Sacramento, the true source of the moniker eludes Haakenson. He loves that about his band. Before it was his band it was his ‘zine. Prior to the ‘zine it was a graffiti tag by a girl in Arcata, Calif., who claims she saw it done by a San Francisco artist. Some theorize it was lifted from the Isaac Asimov’s science fiction series I, Robot. “I’ll put out a call right now,” Haakenson said. “I’ll pay $100 for the documented source.”

May it always be obscured and tucked in mystery to preserve the legend of Be Brave Bold Robot. It’s apropos to a band that tucks mementos to childhood in its song lyrics and sneaks away from families and responsibilities into a West Sacramento living room to drink, chat and practice like a discovered teenage Never-Never Land.

“I have a child-like way about me, which I think is maybe what makes me endearing to the people I meet on a regular basis,” Haakenson said. “I think I’m OK with confrontation, but I’d much rather make people happy.” 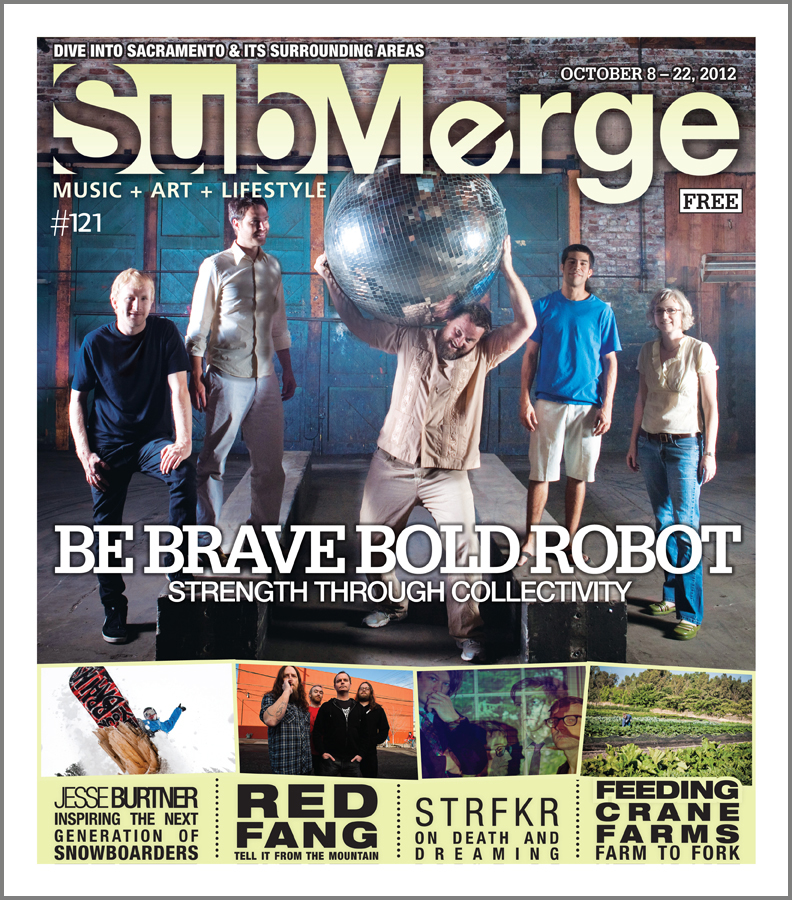 Catch Be Brave Bold Robot when they play Beatnik Studios in Sacramento on Oct. 26, 2012 and celebrate the release of Under a Thin Veil of Madness. Also playing will be Appetite, Cold Eskimo and Buzzmutt. The music for this Final Friday show gets underway at 9 p.m. and there is a $5 to $10 suggested donation.