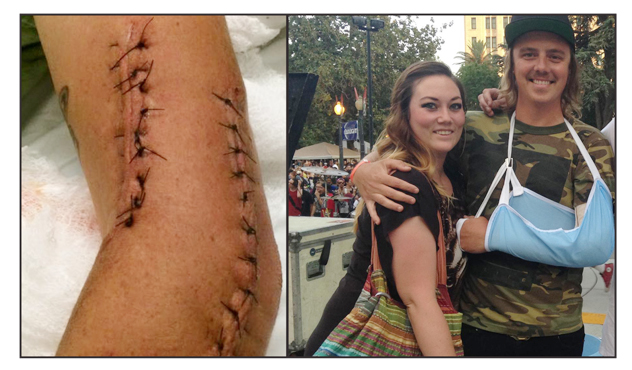 One thing that’s for certain about Sacramento’s music scene is that when something unfortunate happens to one of its own, the community bands together in a strong way to help out. Such is the case for the three local musicians who were the victims of a recent stabbing in Midtown.

In case you somehow missed this story, sometime around midnight on Sunday, June 21, local musician Blake Abbey (of the band Musical Charis — pictured above with wife Jessie Abbey) was walking near 21st and O streets with his brother Bradley and two other friends (Alex Lyman and Wes Richmond of the band Slaves) when they were confronted by a man with a large knife yelling homophobic slurs at the group, taunting them for wearing “skinny jeans.” Despite the group’s attempts to get the assailant to drop the knife, things got ugly real fast. Lyman was stabbed in the side and got a 4-inch cut that nearly hit his spleen, Abbey was stabbed in the arm and received a 12-inch-wound; Richmond broke his hand and ended up with minor cuts. None of the injuries were life threatening, but the victims were hospitalized.

The attacker, later identified as Timothy Brownell, 25, was arrested later that night but got out on bail the following morning. Outrage about the incident spread like wildfire on social media the following day, and the Sacramento Police Department soon reclassified the case as a hate crime because of the alleged homophobic slurs and issued a new warrant for Brownell’s arrest. He eventually turned himself in, and according to the Sacramento Bee, Brownell’s latest court appearance was scheduled for July 2, and he remains at the Sacramento County Main Jail in lieu of more than $1 million in bail.

In the meantime, the local music community immediately rallied and started planning benefit shows to help raise money to offset the insanely large medical bills these local artists have incurred. Many of the events have already passed, but at least one still remains, so if you’d like to show your support, be there on Sunday, July 19, 2015, at Blue Lamp when a number of local acts including James Cavern, Madison Ave, Blaquelisted, Denver J Band and many others will come together for an epic all-day show that’s been dubbed #SacramentoStrong. The cover is $10 and there will be a raffle and silent auction, as well as stand-up comedy and poetry readings. The event runs from noon to 7 p.m. Here’s to a full and speedy recovery for the victims!