Better Off As Animals 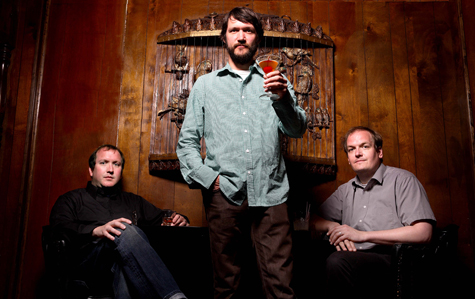 Cursive Shoots from the Hip on New Album

Having escaped the once widely cast shadow of what Jenny Lewis once infamously dubbed “the booming music scene” in Omaha, Neb., during the infancy of the ’00s, Cursive persevered in a way that’s hard to pronounce. Starting strong with their debut full-length, Such Blinding Stars for Starving Eyes, in 1997, the band split up briefly in ’98 before they released the then-posthumous, though no-less-engaging The Storms of Early Summer: Semantics of Song. While the group was riding a wave of angst-y Midwest post-rock to a respectable crescendo, it wasn’t until the band dropped their conceptual agro-masterpiece Domestica in 2000 that people really started to notice. Domestica ushered in what is now a staple of frontman Tim Kasher’s creative output: intense narrative sermons that bounce between subjects as convoluted as the sanctity of love, the terror of breakups and the nature of social roles in an electric world.

After 2003’s “breakthrough” album, The Ugly Organ, tackled the issue of artistic constraints via songs volleying in either bristling beauty (“The Recluse”) or self-aware satire (“Art is Hard”), Cursive emerged a heavyweight in both the literary and “rock” echelons of rock. In short, they became the source of a rabid, cerebral following.

Following 2006’s Happy Hollow (in what was another watershed musical statement, but this isn’t a bio”¦), the band just released Mama, I’m Swollen, their sixth release for Saddle Creek Records, and has shed their skin once again. This time, Kasher explores a return to the aggression touched upon in earlier Cursive albums, only with the wisdom of a (gulp!) veteran songsmith. And while he’s reticent to embrace it, both Kasher and Cursive’s legacy so far has ensured a legendary status, despite their new album’s smattering of “Peter Pan Syndrome” schematics.

“At certain shows—festivals—I am starting to feel a bit like the square trying to jam itself into the triangle, or whichever shape best symbolizes youth,” said Kasher. “I am not looking forward to being ‘grandfatherly’ in the music scene.”

Aging concerns aside (he’s only 34!), Kasher’s maturing lyrical output has been at the center of the band’s allure, and although there’ve been huge steps in evolution from album to album, Kasher chooses not to make any deliberate attempts at trumping a previous product.

“I would rather not express [my lyric writing] as besting/trumping, but instead regard continued writing as upholding a standard one has set for oneself,” he explained. “And sure, that can be a bit exhausting, but I’d be an asshole if I rested on my proverbial laurels due to ‘lyrical exhaustion.’ I don’t think I would write anymore if I was just shitting it out.”

In terms of the oft-times orchestral nature of Cursive’s music—compositions ebb and flow with the weight or subtlety of the lyrics in a kind of Little Red Riding Hood book on tape way—Kasher’s muse is evolving as well.

“When lyrics seem to truly complement the song, well, that’s what I’m going for,” explained Kasher. “Sometimes lyrics come out fairly obtuse in relation to the music, and sometimes I stick with that, because it’s not necessarily wrong, it’s just different, tugging the song in a new direction. I edit and edit and re-edit quite a bit these days, whereas in the past, the first set of lyrics I would write would be the lyrics, end of conversation. If the lyrics sucked, then the song sucked. I grew up a little and pinpointed the problem: ‘Tim, you are one lazy motherfucker. Rewrite those shitty lyrics.’ This is why I am not exactly proud of our previous band, Slowdown Virginia.”

Cursive has endured a flurry of lineup alterations since reforming in ’98, most notably with the amicable parting of ways by drummer Clint Schnase in 2007. After Schnase’s departure, the band brought in former Engine Down drummer Cornbread Compton, who ended up as a semi-permanent member of the band, and recorded the drum tracks on Mama“¦.

“[Compton] was very available, working on every aspect of the record with us, so it was very much a working band for the entirety of the writing and recording process,” said Kasher.

With the band now spread out across the West and Midwest (Kasher now calls Los Angeles home), the process for writing and recording could have been daunting, but Kasher assured that the pistons remain firing.

“I could imagine an anxiety developing due to distance, but we are all fairly laidback about the whole thing,” he said. “As for songwriting duties, nothing has changed; both Ted and myself have always written alone, so now we are merely
‘more’ alone.”

As far as the immediate future of Cursive is concerned, Kasher maintains an optimistic sense of humor.

“If I could answer that, I’d likely be at the horse track right now,” he jokes.

And what of 10 years from now? What sort of musical menagerie might Cursive be weaving for the masses in a decade?
“Ten years? Jesus, who knows,” offered Kasher. “About time for a grunge revival, correct?”

Cursive will headline at the Boardwalk in Orangevale Friday, June 26. Opening will be Mt. St. Helens Vietnam Band and Box Elders. Doors at 7:30 PM, show at 8 PM. 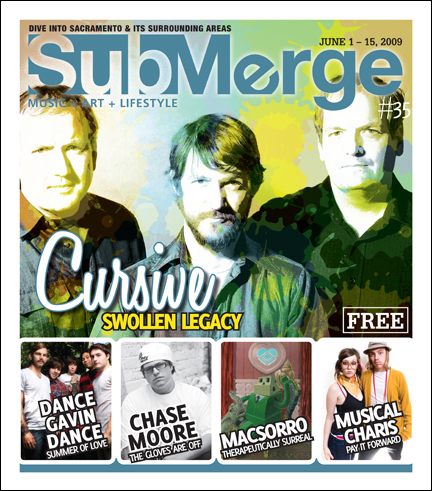