Between Bliss and Fear

If you’ve borne witness to a Le Butcherettes show you know that Teresa Suárez can pull the audience into her lyrical, dark abyss like a black hole pulls a star down into its depths. Once you fall under the unrelenting gravitational pull of the Guadalajaran expat’s alter ego, Teri Gender Bender, there is no escaping the raw fearlessness in her performance.

Take the show at Harlow’s in 2011: After an explosive performance that had the Le Butcherettes frontwoman hurling herself through the crowd, Suárez bolted out of the venue in a self-described music-induced haze and landed straight in the middle of J Street. Just at the precise moment that a Sacramento Police car was cruising down the street.

“That was a crazy coincidence,” Suárez admits. “I snapped out of [the haze] and ran back on stage to continue playing the music, hoping they would just ignore it and drive off. But no, they went into the venue, stopped the show and got me.”

But she was in Sacramento—as soon as the police stopped the show and commandeered Suárez, the crowd spilled out onto the sidewalk and into the street, pleading—no, demanding—the release of the dynamic storyteller, who just moments before had them swooning in adoration of her lyrical barrage. Some people began snapping shots and taking video of the officers questioning Suárez, and ultimately they released her and the show resumed. Admittedly, she was lucky.

“I guess the police felt a little, not threatened, but a little like on the spot in front of all those people,” she says. “If I was by myself I would have gotten taken to the station, at least. So I was lucky people were there to support and say, ‘Hey, no leave her be.’”

Good looking out, Sacto music lovers. Way to rep Suárez and come to her rescue so she could continue the set! 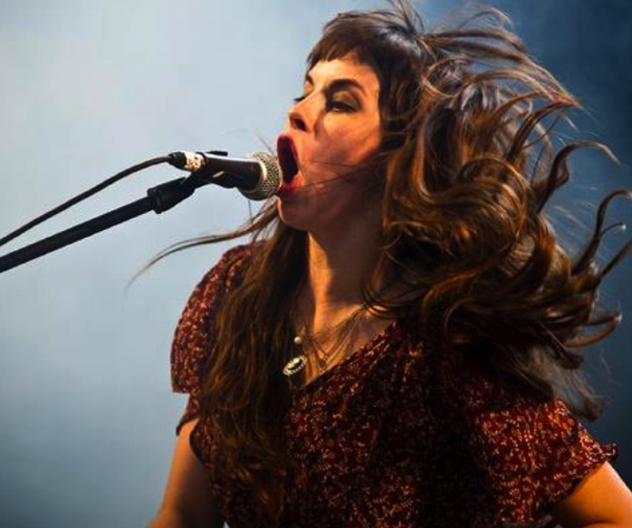 “Yeah, it was so cool,” Suárez says. “Believe me it was lifesaving because my mom would have had a heart attack if she would have found out that I was in jail.”

And that’s what makes Suárez such a dynamic performer: She’s a lioness with the heart of a cub. After having almost been arrested, her first thought was, “What would my mother think?”

Suárez moved with her mother from Guadalajara, Mexico, to Denver, Colorado, as a child—an experience that shaped her multifaceted point of view: one that attacks the institutions of sexism, racism and poverty. It was though her experiences with racism and cultural ignorance, both with Mexican and American people (some Mexicans were prejudiced toward her because her Spanish didn’t have “that Tapatio to it,” as she says, and some Americans called her a “spic” because of her strong accent) that encouraged her to pursue music as a means to rail against injustice. In the end, these experiences in bigotry strengthened her convictions, helping to forge the diamond-plated steel persona that is Teri Gender Bender.

“I learned to love myself. When I was little, growing up in both Guadalajara and Denver, I was made to feel a little ashamed of my roots,” Suárez explains. “Like somehow my cultural difference was a problem for other people…I felt like I was rootless for a while, [but] with music I realized that I’m lucky.”

While social activism is ever-present in the lyrical content of her music and the intensity of her performances, Suárez says that it was her familial influences that forged her punk-rock sensibilities—after all, she grew up listening to Bach: The original anti-establishment artist.

“I’ve been into music my whole life. I started performing in alleys and little bars [when] I was 17 in Guadalajara, Mexico,” Suárez says. “My dad was a huge music fan. He’d come home from work with his Beatles record or a Mozart or a Bach record. He was very open-minded to all kinds of genres.”

As she reflects on the impact that her father had on her education in her development as a musician and poet, Suárez also points to her mother’s somewhat disapproving reaction to their raucous music lessons as a source of inspiration. 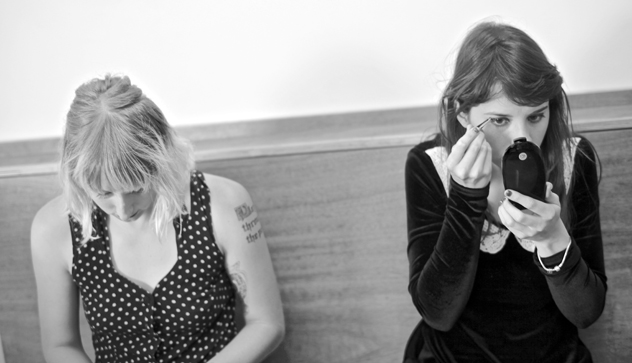 “My mom didn’t hate [music], but we’d turn the volume up really loud, and we lived in a small apartment so the neighbors would complain,” she says. “I found that interesting, that music could cause so much chaos. It was a surreal chaos, my mom was like, ‘Oh, Roberto turn that down, turn it down.’ And my dad was like, ‘No, I’m going to turn it up even louder for you wanting it to be down.’ And I was in the middle of it, so I was in bliss—between bliss and fear.”

You can hear the chaos in the music—bliss collides with fear on just about every track in Le Butcherettes’ sonic catalog. The music is passionate, poignant and razor sharp. When Suárez bites into misogyny, greed and cultural apathy, she does so with a venom so sweet that you’re left paralyzed and begging for more. Her delivery is like a bullet wrapped in silk.

On Le Butcherettes’ latest album, Cry Is for the Flies, which was released online May 15, Suárez exudes the infectious energy that makes audiences swoon. But it’s her live performances that catapult the fiery performer into the interstellar realm. Some of her props and antics have included blindfolded mannequins, wearing meat and drenching herself in blood (yes, real pig’s blood, and she’s a vegetarian).

“It’s more of a visual manifestation of [my saying], ‘Argh! People, wake up. Wake up!” she says. “When I go up there [on stage] I just kind of die a little bit, like you’re letting go of that ego and you’re ready to get laughed at. Once you’re up there you just kind of let the energy possess you and you feed off of the people that are there.”

Suárez is certainly bold in her convictions, but it goes beyond that; she believes that musicians should be leaders. Leading the discussion on issues that many are afraid or unwilling to address. As Suárez gears up for her return to the scene of the 2011 crime, when Le Butcherettes plays Assembly on Oct. 15, 2014, she’s quick to give props to one of the local leaders in the Sacramento music community who she thinks is pretty badass.

“Zach Hill, he’s one of my downright favorites. He’s multi-talented, he’s a great composer, he’s not just a drummer, but he’s an artist, he’s a well-rounded artist,” she gushes. “I think musicians nowadays are more focused on their image than wanting to be a leader, and I think Zach Hill breaks that [mold]. He says ‘Fuck you!’ to the image and he breaks the rules. I think in a way he’s becoming a leader, like he’s sending a message that the artist has had enough of being a slave to the music industry and I think that’s what he represents.”

Just remember, if do you check out the Le Butcherettes set at Assembly, be sure that your smart phone is fully charged—it’s sure to be a performance full of surprises and you just may need to document the frenzy that is sure to erupt. Sans cops, hopefully.

As of press time Le Butcherettes was scheduled to play Assembly Music Hall in Sacramento on Oct. 15, 2014, in support of the Melvins, but the band has since dropped off the bill. We’ll update our readers when Le Butcherettes schedules another Sacramento show. Go see The Melvins still! Tickets are $18 and can be purchased at Assemblymusichall.com, Dimple Records or Armadillo Music in Davis. Le Butcherettes’ Cry Is for the Flies was recently given a physical CD/LP release on Sept. 16, 2014 via Ipecac Recordings.