Beyond the Bottom Line

When I catch up with Big Business guitarist Scott Martin, he’s exiting a restaurant somewhere between Dallas and Nashville, a little frazzled from an evening prior when he and his Los Angeles-based band mates played a gig at the Gas Monkey Bar N Grill, opening for The Sword on their U.S. tour. These are the first live dates that Big Business has had the chance to play since the Halloween 2013 release of their fourth album, Battlefields Forever. Bassist/vocalist Jared Warren was expecting his first child around the release date, which meant that the road would have to wait.

Their Dallas stop was a memorable one, as Martin reports.

“A guy at the show last night flew in from Sweden,” says Martin. “He heard us on a Sword channel on Spotify, and it played us and he was like, ‘What is this?’ and he flew to Dallas.”

The hubris of this kind of interaction might come off as garish, but Martin’s reference of it is, in fact, at the core of Big Business’ modus operandi as a band now: The little connections made as part of life as a small business.

“I’ve had label experiences where I’ve done all the artwork for the record, yet the label charges us thousands of dollars for art,” says Martin. “You get an itemized list of things they charge you for, and it’ll be like $5,000 for radio, and, you know, no one listens to radio. [With our own label] we know exactly what we’re spending on what, and with us, the most important things are the songs and doing justice to the music we’re writing anyway. All the other stuff has just been a natural series of events.”

Battlefields Forever is actually the third release on the band’s Gold Metal Records, following two Big Business EPs, including 2011’s seismic Quadruple Single. The self-run label—currently housed at the band’s rehearsal space—serves as a vehicle for the fuzz-metal trio to produce and distribute their music on their own terms. Everything from the artwork and layout of the album itself, down to overseeing the actual pressing of the vinyl, was meticulously lorded over by the band. Martin, Warren and drummer Coady Willis bypassed the typical pre-release buzz-game that nearly every band succumbs to in order to get heard. That meant no album advances, no PR campaign and—perhaps most riskily—no distribution deal. That decision, coupled with a temporary moratorium on touring, meant that for the larger populace of music-listeners, critics and magazines, Battlefields Forever was unveiled with all the fury of a mewing kitten.

That is, until you listened to it.

Charging from the get-go with a driving, battle-ready drumbeat, the symbiosis of Warren’s ferociously crunchy low-end is rounded out by Martin’s sludgy accompaniment. Whereas 2009’s Mind the Drift—the band’s last LP for now-defunct metal label Hydra Head—still centered the band around the technical proficiency and rhythmic counterpoints of Warren and Willis (Martin came on board in 2010), Battlefields Forever steadies the ship a bit, allowing a depth of instrumentation to navigate songs through wily walls of fuzz on tunes like “No Vowels,” “Trees” and “Doomsday, Today!”

“All the sounds on the album are our amps,” says Martin regarding any conscious aural or evolutionary decisions made for the album. “That’s what we sound like.”

Calling on their friend Dave Curran—who mans bass guitar for Unsane—to produce the record, Big Business holed up at Entourage Studios in North Hollywood for an intense two-week session that was later mixed at Seaside Lounge in Brooklyn, N.Y., by Curran and producer Andrew Schneider.

“We were paying the studio out of our band fund money, and the clock is ticking when you’re in that situation. So we banged it out pretty fast,” reports Martin. “We were really prepared, so when we went in and tracked everything, I’d already known what overdubs I was gonna do because I use ProTools at home. I’d go home after practice and figure out what other parts the songs needed. We were all technologically savvy in that way. Since it was our responsibility, we basically barged in the door, worked our asses off and left.”

That the album may just be the band’s crowning achievement musically is all the more impetus for them to have taken the reins and done things the right way for them. The incubation period before they could tour the album, too, was likely a blessing in disguise. After all, their current tour is their distribution deal. And it’s a good one. 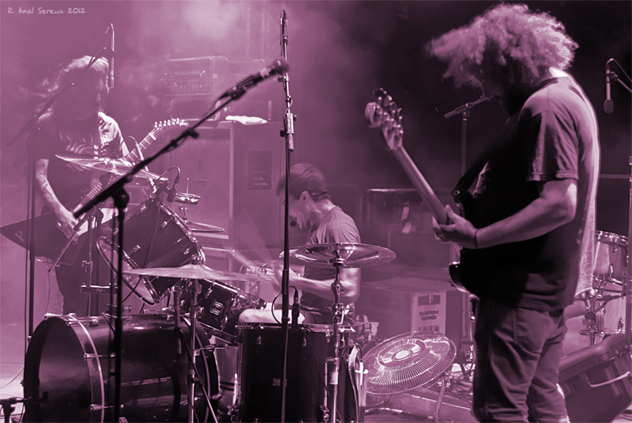 “Since we don’t have a distro deal, this is kind of it,” says Martin. “We’re traveling around selling our record. Because we run everything, we also talk to the people who buy our stuff and listen to it. We have a close relationship with them. They make suggestions and we try and meet somewhere with them.”

Even when considering merch sales, the band has successfully eliminated a swath of cash-grabbing middle-men by utilizing the services of online marketplace IndieMerch, who more formally facilitate T-shirts, posters and other bits of swag for artists. The company also provides services for the operation of online retail channels for bands and labels. IndieMerch’s back-end software supplies the band with real-time sales reports, and it pays on demand. That means that any time anyone buys a Big Business LP through the online store, the band can view the sale and collect the money right away.

Martin hopes to see a future where more bands adopt the practice of foregoing the perhaps-tempting route of the label/PR machine and just put some elbow grease into a truly DIY system.

“It’s not that difficult to do on your own,” explains Martin. “We have a name for ourselves after being around for so long, but it’s all really easy stuff to do. Hopefully the protocol of how albums are released, just generated out of hype and whatnot, I hope there’s a big change in that. I hope people start doing things for themselves, like this. You just source out the jobs amongst each other and figure out how to make a record.

“Everybody that has gotten hold of us or done anything with us regarding the record has all been through their terms and it’s a mutual working-together situation. It’s really awesome.”