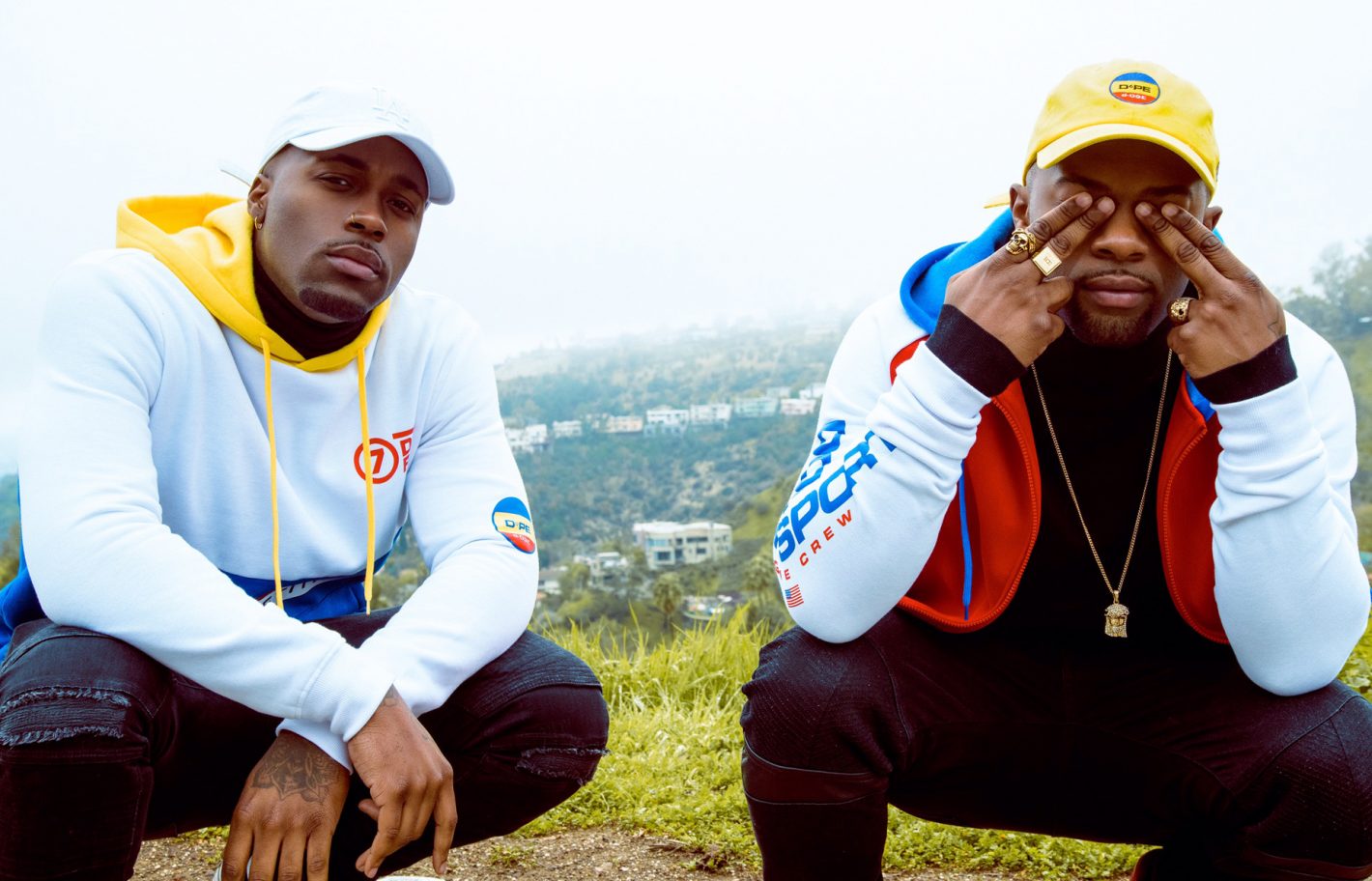 Do you like to get lit? So do the pair of Sacramento-grown brothers behind up-and-coming Blaq Tuxedo. And they’re bringing the fire.

Brothers Dominique and Darius Logan have written hits for Ty Dolla $ign (“LA” featuring Kendrick Lamar, Brandy, and James Fauntleroy), Chris Brown (“Anyway”), The Rej3ctz (“Cat Daddy”) and a host of other famous rappers. But now, the duo is dropping their own full-length album on May 26, 2017, Art by Accident, blending West Coast rap and R&B sounds into chill vibes and hard-hitting bangers. Hooks that get stuck in your head in a good way alternate with quickly spit rhymes as the siblings trade verses.

When I asked them what it’s like recording and performing their music themselves versus writing tracks for other artists, Dominique discloses, “It’s actually a lot easier to write and record for ourselves as artists because we always know what we wanna say. When you’re writing for other people, you have to keep their perspective in mind and write for their worldview.”

And what do they have to say for themselves? Same as most musicians. Love and ladies are the predominant themes. “We come from an R&B background and so that’s at the core of our music still,” says Dominique. “But we also like to turn up and party and just have a good time, and that’s definitely reflected in the music as well.”

Although some of their lyrics could be construed as misogynistic by feminists like myself, misogyny still predominates the lyrics of many types of music, for better or worse. “Tell me how do you know what’s goin’ on? / How you know what’s in my phone? / You a stalker on the low / Bitch fall back back back / Unless you gon’ throw that ass back back back,” say the Logans in “Lit.” Meanwhile, “Steelers” is a thumping club track that makes it known they’re fans of the Pittsburgh football team while also touting their pussy-eating skills and game.

On the topic of inspiration for their songwriting from an instrumental perspective, which mixes elements of many genres, Dominique answered, “We’re inspired by beats. I feel like different types of music and production bring out different elements. If it’s a pop beat, we end up doing pop-style melodies; if it’s a hip-hop track, we end up doing hip-hop related melodies; and if it’s an R&B beat, we do more on the R&B side. We’re pretty versatile, and so it all depends on the music. Our biggest inspirations are Michael Jackson, Lil Wayne, Stevie Wonder, Justin Timberlake, James Brown and Pharrell.” 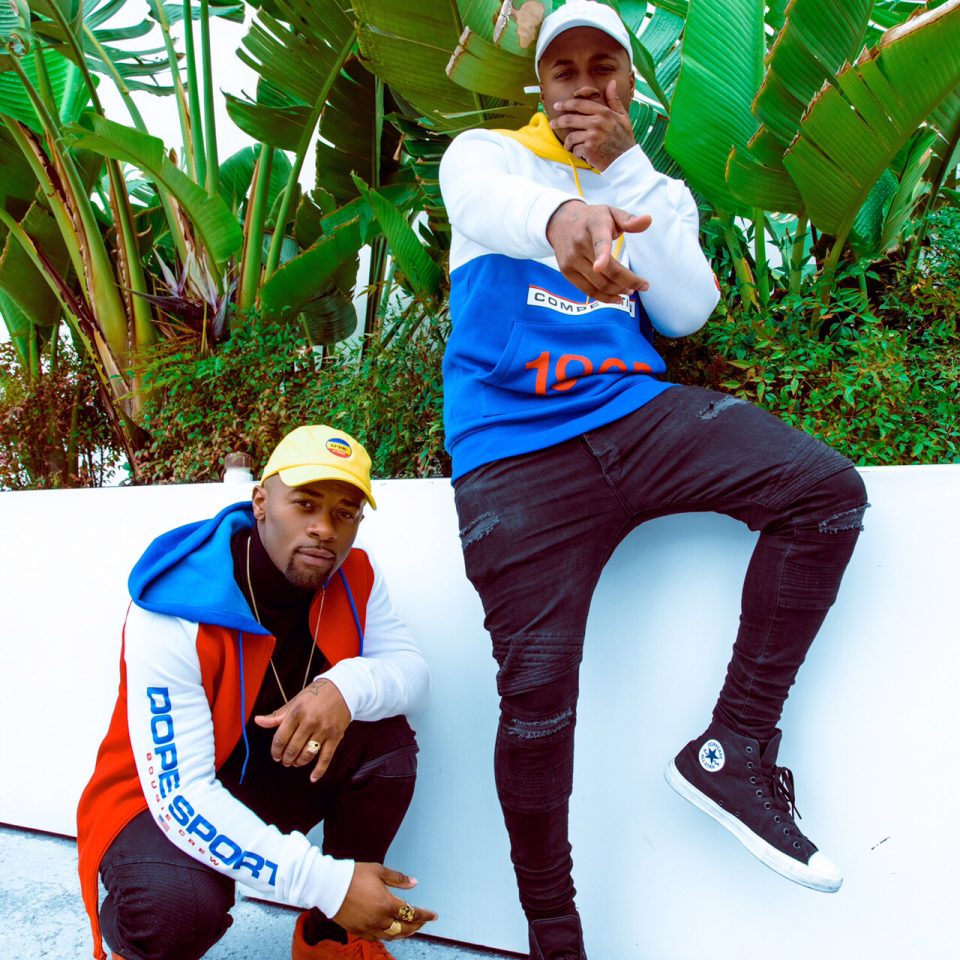 The Logans’ musicianship stands on its own, and only two songs on the new album feature other artists. Mike Jay makes an appearance in “Charisma”, while E-40 lends his talent to “Lit.” Says Dominique of collaborating with E-40, “A mutual friend of ours played it for 40 and he liked the song, so that’s how the collab came about. It’s an honor to have him on there because we grew up playing E-40 at home. It’s a blessing to be making music with a legend.”

You can stream much of their music online, even some tracks from Art by Accident that haven’t officially released yet. I checked out their video for “Lit,” and asked them about shooting that. “We shot the video for ‘Lit’ ourselves, but we’re working on a video for the remix with E-40,” says Dominique. “We haven’t shot it yet but we are going to link up with him and shoot it sooner than later.”

Prior to the release of Art by Accident, Blaq Tuxedo along with DJ Carisma also released a mixtape, Tap In, tiding over fans and building some hype. “We recorded Tap In at home in Sacramento over the span of a couple of weeks,” says Darius. “We wanted to raise awareness of our music and movement before we dropped the album.”

Previously, they’ve also released a couple of well-received EPs, Limousine and Red Flowers, that left fans thirsty for more, and Art by Accident answers. Look for them to tour the United States soon after the release of the LP, and they’ve just returned from Europe where they brought a little West Coast flavor across the Atlantic.

Although they’re from Sacramento, the Logans now reside in Los Angeles, trying to make a real go at blowing up, which I’m certain they will. Of their strategic move, Darius explains, “We moved from Sacramento to Los Angeles because we wanted to be successful in music and that was the only way. By living in L.A., we were able to go to parties, network and link up with artists in the studio on a consistent basis, which gave rise to our songwriting and subsequently, our artist careers.”

While some brothers would be at each other’s throats after spending all that time together writing, promoting and touring, in the Logans’ case, their sibling dynamic enables them to create freely and easily. Says Darius of what it’s like working together, “It’s a really natural feeling in the studio because we’re brothers. It’s fairly easy to get things done. We usually start with the beat first, and then the most important thing is the chorus. After that, it’s pretty easy to fill in the verses. Sometimes we’re collaborating on the ideas, but sometimes either one of us just comes up with the idea and the other one fills in the blanks.”

Not quite art by accident, but the art comes naturally.

Stream Blaq Tuxedo’s Art by Accident (released May 26, 2017) via the Soundcloud player embedded below.