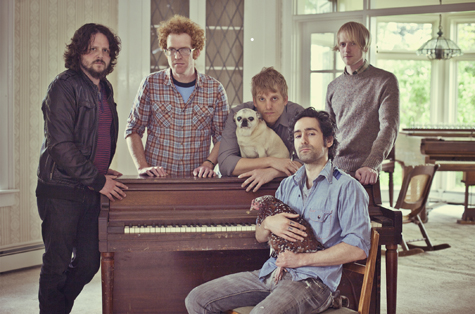 The key word for the successes and attention over the last five years for Portland, Ore.’s Blitzen Trapper might have to be “patience.” With their conception in 2000 as a six-piece crew of classic-rock connoisseurs–anchored by the songwriting prowess of figurehead Eric Earley–Blitzen Trapper accidentally enjoyed an educational incubation period in garages and small clubs for a full seven years before anyone outside their hometown really had a clue or cared about them. With everyone seemingly looking the other way, the band honed their craft, wrote, recorded and released three albums on their own (2007’s Wild Mountain Nation would eventually be re-released on Sub Pop), and figured out, basically, how to be a band. With Wild Mountain Nation, Earley’s artistic prolificacy, and his isolation/inspiration of residing in the band’s actual studio space during the creation of the record, resulted in a buzz that’s ricocheting even today, complemented greatly by the 2008 follow-up, Furr, and the slightly prog-y 2010 LP Destroyer of the Void.

Blitzen Trapper’s latest release, American Goldwing, is a return to the nostalgic confines of road-weary rock, rumbling with gobs of groove, walls of squalling guitars and Earley’s typically brilliant strokes of capturing the nomadic spirit on tape. Big riffs and catchy choruses abound, showcasing a band maturing a mere 12 years after they first played a note. With the band’s ascent into the consciousness of media heads and music lovers alike having coalesced to form a formidable army of devotees, the band is capitalizing on their impeccable sense of timing yet again, hitting the road for another run of dates that will slither them out of the clubs and into the maw of the festival circuit through the spring and into summer. In anticipation of Blitzen Trapper’s gig at Harlow’s on March 5, 2012 guitarist/vocalist/keyboardist/melodica player Marty Marquis spoke with Submerge via phone from Seattle, where he was slated to headline at his friend’s wedding ceremony.

The band’s been off the road for a while now. How do you relax off tour? Do you tend to hibernate away from each other?
We hang out and do stuff now and again, but for the most part I think everybody’s got their own lives now. When we’re on the road, we enjoy each other’s company, but it’s nice to have a break from the enforced intimacy. I’ve got kids now; our bass player Mike [VanPelt] just had a kid a month ago. The other guys have their own things going on, too. When we started playing together in 2000, we weren’t like, “Let’s make a band and get famous and make a bunch of money!” We just liked hanging out, so we’d spend four or five hours a night, three or four nights a week. We did that for years, just hanging out, playing and recording. We’ve logged a lot of time with each other. We don’t feel the urge to do it all the time anymore.

Do you feel like folk, roots or Americana music is being homogenized by its resurgent commercial popularity? If so, is a band like Blitzen Trapper fearful of a backlash?
The thing to look at is how much of this music is actually folk-Americana music, and how much of it is just the trappings of that. I was hanging out with this guy last week, and he was talking about Mumford and Sons was Journey with banjos and acoustic guitars. There’s nothing wrong with that, but it’s just funny I guess. In the [late] ‘60s, no matter what style of music you were playing it was important to have long freaky hair and wear peace signs or have a fuzz guitar, making your music psychedelic regardless of where you were actually coming from musically. So bands are responding to all kinds of different pressures, and I think especially young bands who are talented but don’t necessarily have much of a sense of identity are apt to go for those folk-Americana trappings.

I don’t know about backlash. I feel like everything is so fragmented and Balkanized in music that it’s hard for me to imagine people being like, “Oh, we’re sick of this folk-Americana stuff!” There are a million other subgenres you can get into that will sell just as well probably.

Eric Earley has said that American Goldwing was written and at least partially recorded during your tour for Destroyer of the Void, and that it was hard playing the current songs when he knew that American Goldwing was the “real” record. Was that the sense for the rest of the band, or had you even heard those songs yet?
We’d heard a bunch of them. In my recollection, I think Goldwing was about half-done when we took off on tour for Destroyer. That’s been Eric’s motive; he’s ultra prolific. If he doesn’t actively stop himself from writing and recording, he’d be recording all the time. There were a lot of different things going on around the time we were putting together Destroyer. One of the things we were trying to do was build a consensus with all these different players–the band members, our label, our management–about what the record was supposed to be. I think because Destroyer wasn’t necessarily well-received, it was sort of easy to say that was a bad approach. It didn’t really represent what Eric as an artistic director was going for. He felt like Goldwing was a lot stronger of a representation of who he is as an artist, musician and songwriter. He felt great about the songs that were on it. On an objective level, the songs on Goldwing are coming from a more honest place than anything Eric’s ever put out before. It’s more about his life and less about fantasy stuff.

As a band, then, how do you reconcile that underlying feeling of having such a great album waiting on the shelf and you’re not able to play it because you have to tour for a different record that you worked on just as hard?
I think there’s always that thing where as an artist, you’re always most excited about what you’re currently working on. But there’s a delay in the music biz where your record comes out six or nine months after it’s finished. So you wrote these songs maybe a year or two before. You’re thoroughly familiar with them and you’re kind of tired of them. And then if nobody else in the world seems excited about these songs, it’s even more tempting to want to move on to the next round. But I don’t think that this narrative of American Goldwing being the “real record” is anything that all of us were thinking when we were touring on Destroyer.

I know Eric writes a majority of the songs, but what collaboratively is happening in the creative process? How informative are you in those processes when recording and writing, and the rest of the band as well?
I’m not very important at all in the writing and recording process. I came in on Goldwing and sang on some songs, but I didn’t play any guitar or anything. Brian [Koch], our drummer, was a lot more instrumental in arranging these Goldwing songs. I think he was a big part of why those songs turned out the way that they did on the rhythm side. I think also there’s this–I don’t know if it’s subliminal or what–but if you’re playing stuff in the van when we’re on tour, Eric’s going to pick up on it and incorporate elements of what he’s hearing, whether or not he realizes it. We’ve been talking about aesthetics and rock ‘n’ roll philosophy for a decade now, so I think we’ve all really influenced each other and been informed together. Also, I think while Eric’s in the studio arranging these things he’s thinking this stuff is going to be represented live by these players, here’s what they do well. He’s arranging these songs and thinking in terms of who we are as a band, as individuals. That’s not strictly collaborative, but I think it still affects the way the songs turn out. The more we go along and become a band, and it sort of crystallizes as a creative performance unit, the more it affects the way the songs end up on the record.

Is there a song that encapsulates the universality of that theme best on this record in your opinion?
Yeah, I think the title track is a pretty awesome song. It’s got a lot of abstract imagery, but it’s about travel, and the willingness to get on a vehicle and go. There’s sort of the spiritual thing that’s built into that song in particular, where the will to travel and the will to move places is somehow spiritually refining. But I think probably the best song on the record is the last one, “Stranger in a Strange Land.” It’s kind of the flip side of that: Once you stop moving, you don’t know where you are.