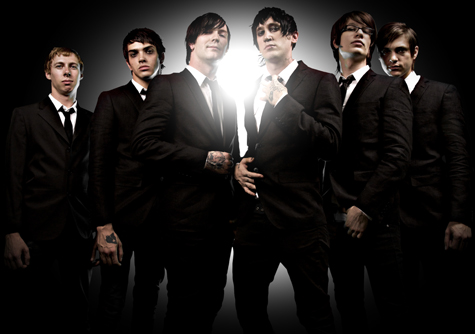 Stimulating body and mind, Alesana creates a rare breed of heavy music that’s equal parts brain and brawn. Folding literary references, both ancient and modern, into their lyrics, the band sounds sort of like a book on tape set to three harmonized guitars and dueling clean/growled vocals.

Formed just over five years ago by two North Carolinians by way of Baltimore, Md.—guitarist/vocalist Shawn Milke and guitarist Patrick Thompson—Alesana already has quite a hefty musical output to their credit. Released Jan. 26, 2010 The Emptiness is already the band’s third album. Though they’ve been quick on the draw since releasing their first LP, On Frail Wings of Vanity and Wax, in 2006, Milke says he took his time getting Alesana off the ground.

“We moved down to North Carolina, because the music scene is way better down there than in Baltimore, especially for local music,” Milke says. “We moved down there and took our time. It took a really long time to get started, because we wanted to start off right. We were a full band for three-and-a-half months before we even played our first show.”

With downloading becoming the most prevalent way consumers buy music, Alesana’s almost album-a-year pace seems to buck the industry trend. However, Milke says that the band’s approach has worked quite well for them. While they may not have cracked the lofty Gold record mark, their sheer volume of material has earned them a measure of security in an unstable industry.

“In a climate, in an industry, where selling 100,000 records is such a big deal for longevity, we might not have sold 100,000 of one record yet, but we’ve put out enough records in a short time that we’ve sold well over 100,000 total,” Milke says. “Instead of selling a huge chunk of the same record, and a lot of kids getting bored and not even wanting to get your second record because they’re so tired of the old stuff, we constantly keep it fresh.”

To produce that much material in such a short time, it takes a strong creative team. Alesana has Milke and Thompson at the helm, sharing the songwriting duties. The two played together in a pop-punk band in Baltimore before they decided that they wanted to take their music in a heavier direction, prompting a change of scenery. Milke says that he and Thompson emulate one of their biggest influences, The Beatles, in terms of work ethic.

“We look to The Beatles as our inspiration,” Milke says. “Back in their day, they would put out four or five records a year. We’re one of those bands that doesn’t believe in hiding behind a record. Once we have the material ready to go, we bug the label that we want to put it out. We want to do another record.”

Alesana may be the hardest working band in metalcore, and they’re proving that on the road this late winter through early spring with a nationwide tour supporting The Emptiness. The tour will bring Alesana and their theatric live show to the Sacramento area with two dates at The Boardwalk in Orangevale on March 5 and 6. Milke says you should expect plenty of choreography.

The Emptiness comes with a 13-page story. Did the idea for the story come first, or vice-versa?
It’s weird. The idea to want to do a story came to me first. We’ve always based our records on short stories—other literature. Our first record is , our second record is famous fairy tales, so this time around, I knew I wanted to create my own story—or our own story. The idea to write a story came first, but the story and the lyrics and the music all came together in the same year. The record started being born in January of last year, and we finally finished recording it in August. It was over an eight-month period that everything was created.

Is that longer than usual for you guys?
It’s usually par for the course, but this time, a lot more time was spent within those eight months getting ready. It wasn’t like, “Oh we’ve got plenty of time, we can just wait.” We spent the better part of those eight months writing this record.

Why do you think that was? Did having your own story in mind affect your preparation?
In this industry right now, we’re lucky to be on our third record. A lot of bands have a one or two record lifespan, and then no one cares about them any more. Putting out a third record was a special feat for us to accomplish, so we wanted to make sure that we showed as much effort as we could, so we weren’t just a band trying to finish a record deal and throw the last record out there for legal reasons. We wanted people to know that this is our third record, but it’s also the one we’re most proud of and spent the most time on.

You mentioned that your previous albums had allusions to literature. The last song on The Emptiness is called “Annabel,” and since you’re Baltimore guys, is that a nod to Edgar Allen Poe?
Yeah, you’re absolutely right. When we decided we were going to write our short story, we tried to figure out what genre we wanted it to be in. I’m a huge fan of old romantic stories and horror stories from all generations. We found Edgar Allen Poe was the best for combining those two. He was really good at writing really creepy love poetry. “Annabel Lee” was always my favorite of his, because it was so eerie how he could write about a dead person and make it sound so beautiful. That’s why we named the female lead character in our story Annabel, to give thanks to Poe for inspiring our story.

Poe’s poems, and even his prose, have such great rhythm to them. Did his influence seep into the music as well?
They have a musical feel to read them. We’ve always been inspired by, like I said, Greek mythology and the Brothers Grimm and a few contemporary screenwriters and such. We just thought this time we’d go with one of the classics—one of the reasons that this type of prose exists to begin with”¦ We wanted to allude to Poe so people would be able to grab at that, but not make it completely obvious.

Was it more challenging to base something off of a story you’d written yourselves as opposed to an existing literary work?
I think it was definitely more challenging to write to other people’s work, because when it’s your own story, you can manipulate it any way you want. When you get to the bridge of the eighth chapter, and you’re like, “Wow, the story’s just not working for this part of the song,” you can sit there and say, “Well, let’s change the plot point a little bit.” If the story’s already written, you don’t really take those liberties”¦

On the other side of the coin, with the stories we based our past albums on, we’d always twist them a little bit. For example, the fairytale by the Brothers Grimm, “Hansel and Gretel,” we have this song called, “Sweetheart, You’re Sadly Mistaken.” What we did was change the ending; what if Hansel and Gretel ended with them escaping and killing the witch instead? We changed it up in our own weird way. We’ve taken some liberties in the past.

In your bio, you’re quoted as saying that The Emptiness is “an adventure like a Broadway play.” Do you take a lot of inspiration from musicals and/or rock operas?
I’m hugely inspired by rock operas and musicals. I have “Forget Regret” tattooed on my left hand, which is a line from Rent, which is one of the most inspiring pieces of anything ever put together in my lifetime. The Emptiness is something that we dream of taking to another level. I have dreams of making an independent film out of it, but time will tell if we can gain enough popularity with the story to develop any interest.

Were you a theater major in college or into theater in high school?
It’s interesting, because I was really gifted at sports all through high school. I played baseball and basketball. I even had a partial scholarship to Arizona State to play baseball, so even though I was super interested in music and theater and stuff like that, you know how high school cliques go. I couldn’t play baseball and be the guy in theater as well. So even though I had a strong interest in it and as much as I studied it and went to Broadway plays and local plays—and film is my life. I watch so many movies, it’s disgusting. That’s always been my passion and my inspiration, and once I hit a certain age, I realized that—once I wasn’t a dumb kid anymore. That’s when I started playing music.

So you started pursuing music pretty recently.
Yeah, I didn’t really start pursuing guitar full time until I was 17, in my senior year of high school. I was like, “You know what, this is my last year of high school, I might as well even try to learn the guitar.” From there, it kind of took off. I realized that came more naturally than anything.

Were you writing songs right away?
Yeah. My dad always teases me about that. He wishes I’d started earlier, because I’m pretty much self-taught everything: guitar, drums and piano—and vocals too. I never had any formal training in any of those areas, and it all came to me, like I was supposed to do it. I have a lot of really old material that I recorded on my own, and I’ll listen to it every once in a while just to laugh at it. I’ve been writing songs for a pretty long time now.

A lot of bands in your generation, such as yourselves, Thrice and Coheed and Cambria, seem to be putting out concept albums. Why do you think it has become so prevalent, especially in the genre of music you’re a part of?
I think when bands start to get lumped in with each other—and no band likes that. No band likes hearing, “Oh, you’re just like this band.” I think—even if it’s not a concept—but just creating a record that’s for a purpose, even in your own mind. Like, this isn’t just a collection of 10 or 11 songs, but you wrote these 10 or 11 songs with this reason in mind, it’s like you’re separating yourself from the crowd. By putting out a story or a concept record ourselves, people can go, “Oh, they’re not exactly like these other six bands, because they actually took the time to write a story and put together an entire Digipak with two booklets and artwork and crazy stuff going on.” Especially in such a heavily downloaded age of music, to offer extra things with a record definitely makes
a difference.

Alesana will play The Boardwalk in Orangevale on March 5 and 6, 2010.