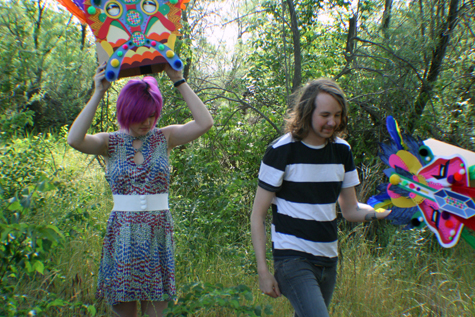 20,000 Breaks into the Sacramento Music Scene

Comprised of locals David Mohr and girlfriend Meg Larkin, the band 20,000 is relatively new to the Sacramento music scene—but with their youthful energy and down to earth attitudes, it’s no wonder that fans are quickly tuning in. “By default, I usually just say it’s dance music with guy/girl vocals and synthesizers,” Larkin says about their style. Even if you’re not typically a fan of dance music, there is no doubt that the upbeat tempo and catchy lyrics of 20,000 will have you up and out of your seat in no time.

It started as a dream—literally. Mohr says, “I had a dream a while ago that we had a band and we named it 20,000.” Both Mohr and Larkin are adamant that if you dream it, you must do it, and thus 20,000 was born. “If you do what you do in your dreams in real life, then it’s almost like you’re predicting the future,” Mohr says.

“Yeah, it’s true,” Larkin adds. “If you dream that you’re wearing red socks, you have to buy a pair of red socks and wear them.”

About two years ago, sparks started flying, musically, that is. Mohr began writing music on his computer, and then he and Larkin started adding vocals. Mohr says, “When I was writing the songs for the album, I was listening to music that has a lot of synths in it, but not necessarily electronic music.” They cite musicians such as Prince, Talking Heads and Hot Chip as being very influential during that time period. Larkin says, “Up until a couple of years ago I never really listened to dance music, but it’s some of my favorite music now.”

The goal for their music is simple: create songs with a good beat that people will want to party and dance to. Mohr says, “While we were recording the album, I was thinking it would be cool to just have a good CD for people to listen to in their houses at parties.” He writes all of their songs, and is no stranger to the music world. He played with some of his high school buddies in a band called Didley Squat for about six years, and when that gig dissolved, he naturally transitioned into forming 20,000.

While they had been diligently practicing and recording songs at home for many months, their first live performance happened this past August, at Old Ironsides. “We were apparently really visibly nervous,” Larkin remembers. “I was wearing short shorts and this crop top, just trying to be funny, but it was the most intimidating outfit to wear in front of people as a joke.” While their first show was definitely nerve-wracking, a lot of their friends came out to show support and it was a fun experience that paved the way for future shows. Other than Old Ironsides, they’ve played at Javalounge, Luigi’s Fun Garden and Blue Lamp.

When transitioning to live performances, Mohr says that one of the biggest challenges is figuring out how to make everything sound right in such a drastically different environment. After spending two years perfecting their songs in their apartment with only a tiny set of computer speakers—and trying to keep the noise level down so as not to disturb the neighbors—they now had to create a seamless performance in a real venue.

For Larkin, there was the added challenge of being brand-new to the music scene. She had been involved with musicals during high school but had no prior experience with playing an instrument. “When we decided to start playing live shows, I learned how to play rudimentary keyboard,” she says. This was completely terrifying at first, and she remembers being nervous for six or seven hours before a show, to the point where she could barely eat or drink. But as time went on and performing became more commonplace, her nervous energy eventually went away, and now she loves the thrill of shows. “When we have a show and there’s people responding to it and everyone is nice it’s like, yes! We’re the best band ever! Let’s do this every night!”

Both members play keyboards and sing, and their drumbeats are on an iPod. This means that they can carry all of their instruments to a show and set everything up on their own—no roadies required. “It’s super easy for us to set up,” Larkin explains, adding that it literally takes about four minutes. “Just put the keyboards on the stand, plug it in, turn the iPod on and we’re set.”

Although perhaps they hadn’t planned to “make it big” in the music business, the Sacramento music scene has been good to 20,000. Larkin is surprised at how easy it has been to get shows that they really enjoy. Their friends have also been extremely encouraging in this new venture. Larkin says, “It’s definitely been cool to see how supportive our friends have been, getting them to come out and pay for shows over and over and over again.”

20,000 will likely become a common name in the Sacramento area as time progresses. The couple is ecstatic about their 2009 New Year’s Eve show at Blue Lamp, which has been the biggest show they’ve played so far.

You can check them out on Myspace: www.myspace.com/20000music. 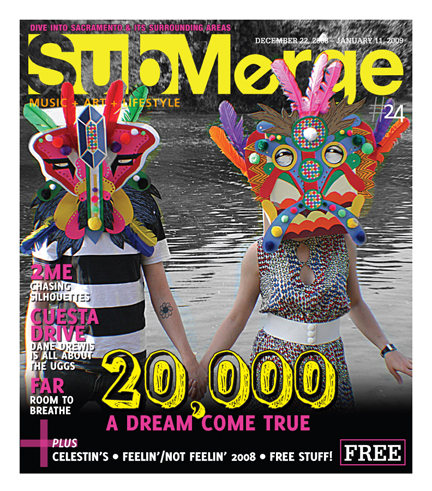