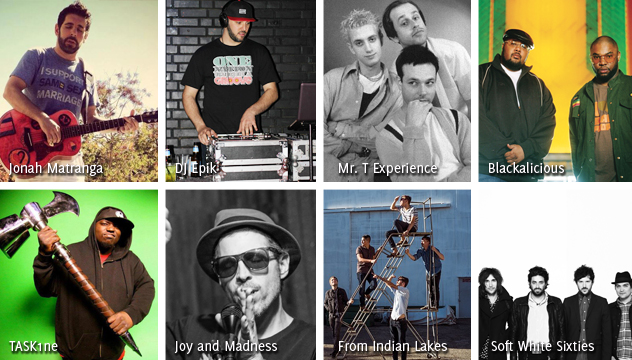 Once again winter has passed (if you can call that a winter), which means that spring is here and with it, the 2015 Concerts in the Park series, which officially kicks off on Friday, May 1! We’ve got your first glance at the eclectic lineup right here, and there’s a little something for everyone. Dig country music? Don’t miss May 15 with Cripple Creek Band and Golden Cadillacs. Want to throw your hands up at a hip-hop show? Mark your calendars for Blackalicious and DLRN + Stevie Nader on May 29 and a sure-to-be-insane collaboration set featuring Task1, Century Got Bars, J-Ras and Charleee on July 24. Wanna rock out with some post-hardcore? Check out Jonny Craig’s new band Slaves alongside A Lot Like Birds on June 26. Want to dance your face off? Hit up Joy and Madness on May 8. What about punk rock, you ask? Yeah, they’ve got that too. Check out Mr. T Experience, The Four Eyes and others on June 19. The indie-rock loving crowd will enjoy July 17 featuring From Indian Lakes and Sunmonks, and reggae enthusiasts can get their fix with Element of Soul on June 5 and Arden Park Roots on July 24. Peep the entire lineup below! If the artist’s name is linked, click on it to read a feature on them from a recent issue of Submerge. We’ll see you out at Cesar Chavez Plaza on Friday nights starting on May 1!

No show! Happy 4th of July!