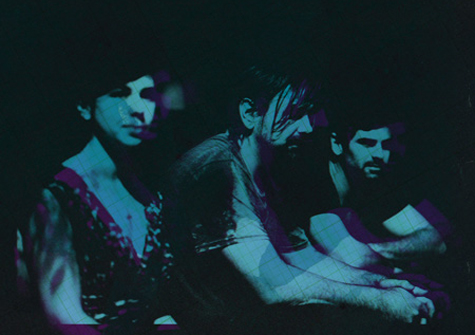 Stolen gear, finicky crowds at shows and an anxiety toward giving his music to anyone he doesn’t call “friend” are just a few of the reasons Dusty Brown feels like this city is killing him. If the local scene is the cause of his suffering, why can’t Dusty Brown abandon Sacramento?

His insularity could be his greatest downfall, but in that apprehension to be seen or be the scene, he’s surrounded himself with friends within music who will gladly step in to exalt his art. After turning over a little five-song EP to his friend and electronic-colleague Scott “Tycho” Hansen, Dusty Brown was uncertain of his friend’s intentions. Hansen’s artistic talents stretch beyond his propensity for finely crafted down tempo IDM. Hansen fashioned the This City Is Killing Me with artwork based on photos by Raoul Ortega and put it on his ISO50 blog for free download.

Hansen was not bashful in introducing Brown to his fan base, as the post was accompanied by a three-paragraph salute to Brown. Hansen wrote, “I’ve learned more about music from Dusty than anyone else; his production style and methods are truly awe inspiring.”

Brown’s career arc illuminates the thought process behind naming a collection of songs This City Is Killing Me. After the dissolution of the electronica scene, Dusty’s band, consisting of his sister Jessica and cousin Zac, had its live equipment stolen in 2007. To recoup the losses, the band put out its Hope You’re Happy LP. “It succeeded in getting my money back to the dot,” he said. “I put a post out thanking everyone and the sales literally dropped flat, which was…great.” Since that record, the group limited itself to the studio and the occasional gig at The Press Club or The Hub.

Brown spoke as though he’s a man out of his proper time. He married at 18 years of age and now has four children with one more on the way. Brown said he understood the music business some in the ‘90s–the tour and make connections plan–but as a family man with hermetic impulses, he never thought that giving his music out for free would put a buzz into the band again. “Twenty-five hundred people downloaded it within three days, when before I was lucky to get one or two people to hit my Web site in that time,” he said.

With one stamp of approval blog post from Tycho, the band Dusty Brown went from strictly known in Northern California to receiving coverage from national music Web sites like XLR8R, Pitchfork Media and Yourstru.ly.

“It was a pretty incredible feeling that week,” Brown said. “Coming from a Sacramento guy, who nobody literally knows who we are outside of Sacramento, to have people donate from the Dominican Republic is crazy. The fact that it reached so many people so quickly, shows the old model of touring for months for people to hear your music is completely gone.”

The instant gratification benefited Dusty’s creativity, as he’s eager to finish a new full-length that’s nearly completed. And with the couple-hundred donated by downloaders of the EP, he’s toying with the idea of pressing This City Is Killing Me on vinyl.

Dusty Brown might be riding a high wave this month, but he’s grounded enough to recognize he still lives in Sacramento, a city that from his perspective is still trying to kill him. He played a capacity night with Tycho at the first annual Sacramento Electronica Music Festival in January, only to play again a week later to three people. “This month the NBA Finals will be the reason no one comes out,” he said. “But, I’ll end up playing for a random hippie that doesn’t care about sports.”

He went on to say, “I feel like there’s a superficial love for live music [here]. The minute you feel like it’s authentic you realize it’s not.”

It’s those one-off nights of capacity crowds, that lone hippie appreciator and the seclusion of Sacramento, where his family lives, that keeps Dusty Brown among us. He said that for all the depressive tones his music can take, he often describes it as “melancholy electronica.” “I’m not a very emotional person, so when it comes to music I kind of let it go a little bit,” Brown said. “I’m sad, then I’m pretty happy about the fact that I got over I was sad.”

This City Is Killing Me is Dusty’s passive aggressive bout with the naysayers that have hurt his feelings. But it’s when his sister Jessica takes cues from his sounds and applies them to her experiences that the Dusty Brown music finds its plateaus of euphoria. “I wouldn’t say we’re completely connected, but I think she listens to the frustrations I have,” he said.

At five songs the EP is concise, overlapping tones and instrumentation; but for every brooding moment, the band releases the tension with bursting chorus lines on “How’s That” or the glimmers of hope in the refrain of “Back to Back” as Jessica sings, “As we remember the light in our dark past.”

With the small window of hype surrounding This City Is Killing Me, Dusty said he’s ready to push ahead with the mountain of music he’s been keeping in the vaults. Dusty once employed a writing method in which he wrote three to four new songs for every live set, instilling a prolific work ethic. My phone call interrupted a recording session with Steve Borth of CHLLNGR, who uses Dusty’s home studio whenever he’s in town. In his three years of recording silence, Dusty produced a hefty chunk of the upcoming Who Cares record and prepared several EPs with Jacob Golden under the group moniker Little Foxes. “That EP was just a precursor to a full-length album,” he said. “I’ve got mass amounts of music I need to get out before the end of the summer because I’ve got a baby coming.”

Brown framed the buzz around his EP as “not much” in comparison to what most artists receive, shaming himself for strictly showing his music to people he deems “friends.” I jokingly asked if, after this surge of releases, it would be another three years before we hear from Dusty Brown again. He followed up with an anecdote about a night in the studio with Who Cares: “I was playing them some of the music I’d written over the last 10 years. I didn’t realize two hours went by. I wasn’t even halfway done. I’m starting to think I should create another name just to release all this lo-fi drum ‘n’ bass and hip-hop I wrote.”

Catch Dusty Brown with Paper Pistols at Capital Garage on Saturday, June 26. Or you’ll be able to see them at their EP Release show Saturday, July 17 at the Townhouse.