David Schmitt and Kyle Even of Breathe Carolina may be young—but damn, their songs are catchy. And the boys seem to know it. “I got the lines that’ll be in you tonight,” they write in their song “Diamonds.”

This is dance music—with a twist. What sets Denver-based duo Breathe Carolina apart from similar bands is the contrast created by two dynamically different vocal styles. While Schmitt draws listeners in with his poignant and energetic pop-punk vocals, Even lends his raw screaming to the songs, giving their sound an edgier feel than other dance-pop music. Even describes their sound as “Hellogoodbye meets Underoath meets DJ Irene.” Or, in a word, “dance-core.”

Even has had years to perfect his raw, screamo vocal style, and at age 19 was the singer for a band called Rivendale. Surprisingly, singing is new to Schmitt—he started out as a guitarist, and used to play with a band called The Autobiography at age 17. That was five years ago, and both have come a long way. In addition to his bad-ass guitar and vocal skills, Schmitt plays a handful of other instruments, including the drums. “You name it, he can do it,” Even laughs.

Even and Schmitt met through friends and became roommates. They started writing some songs together just for fun. It worked so well that they released some tracks through Myspace in late 2007—and were completely shocked that their songs would hit home with so many listeners, and so quickly. Just a year later, they signed with Rise Records. “We didn’t ever guess this, but that’s life,” says Even.

Their first EP, titled Gossip, was released through iTunes in November 2007. “We were touring before we had a label,” Even says. This helped them to afford the necessary vans and equipment to tour. “We needed that back-up,” Even explains.

In less than two years, they’ve already toured the country. “You name it, I’ve been there,” Even says. Thus far, their favorite places to play have been their hometown, Denver, as well as Atlanta, Los Angeles, New York and Pittsburgh. “We get to see what the world is about,” Even says.

Currently, Breathe Carolina is touring as part of the 2009 Take Action! Tour with Cute is What We Aim For, Meg & Dia, Every Avenue and Anarbor. A portion of profits will be donated to Dosomething.org, an organization devoted to getting teens more involved with their world. “It’s about kids making their own charities,” Even explains.

For live shows, they play with a full band, recruited from their other musically inspired friends: Luis (synths and keys), Joshua (keys) and Eric (lights and DJ). Joshua also has his own project—a band called The Spin Cycle. “We stole him from his own thing,” Even admits.

Schmitt and Even co-write the lyrics. You might think that sharing this creative responsibility would result in arguments, but Even says this isn’t the case—the pair is tight, and their friendship ensures that they can make it work. “We give our opinions. We don’t really argue about it.” He feels that the reason they get along so well is they’re not afraid to communicate. “We’re family, unconditionally,” he says.

Their cleverly crafted lyrics reflect a desire to have fun and live it up, which is ideal for their mostly 16- to 21-year-old fans. “It was a dance party, everyone looked just right, I played you all night,” they write in the song “The Birds and the Bees.” Not surprisingly, the kids are eating it up and begging for more.

“I definitely see the people that come to shows and think that younger kids will grasp it more,” Even says. But, he mentions that parents have also approached them
to say that they love the sound.

Call it screamo, dance music, electronica or pop-punk. Better yet, don’t call it anything—just get ready to dance and sing along to these angst-y, melodramatic lyrics set to a backdrop of electronic beats. Enjoying the moment is what Breathe Carolina is all about. “I just hope people have fun, lose inhibitions and have a good time,” Even says. “[We hope to] put them in a setting that they will remember.” 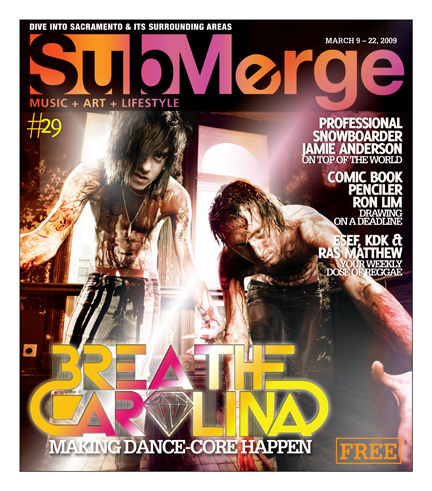