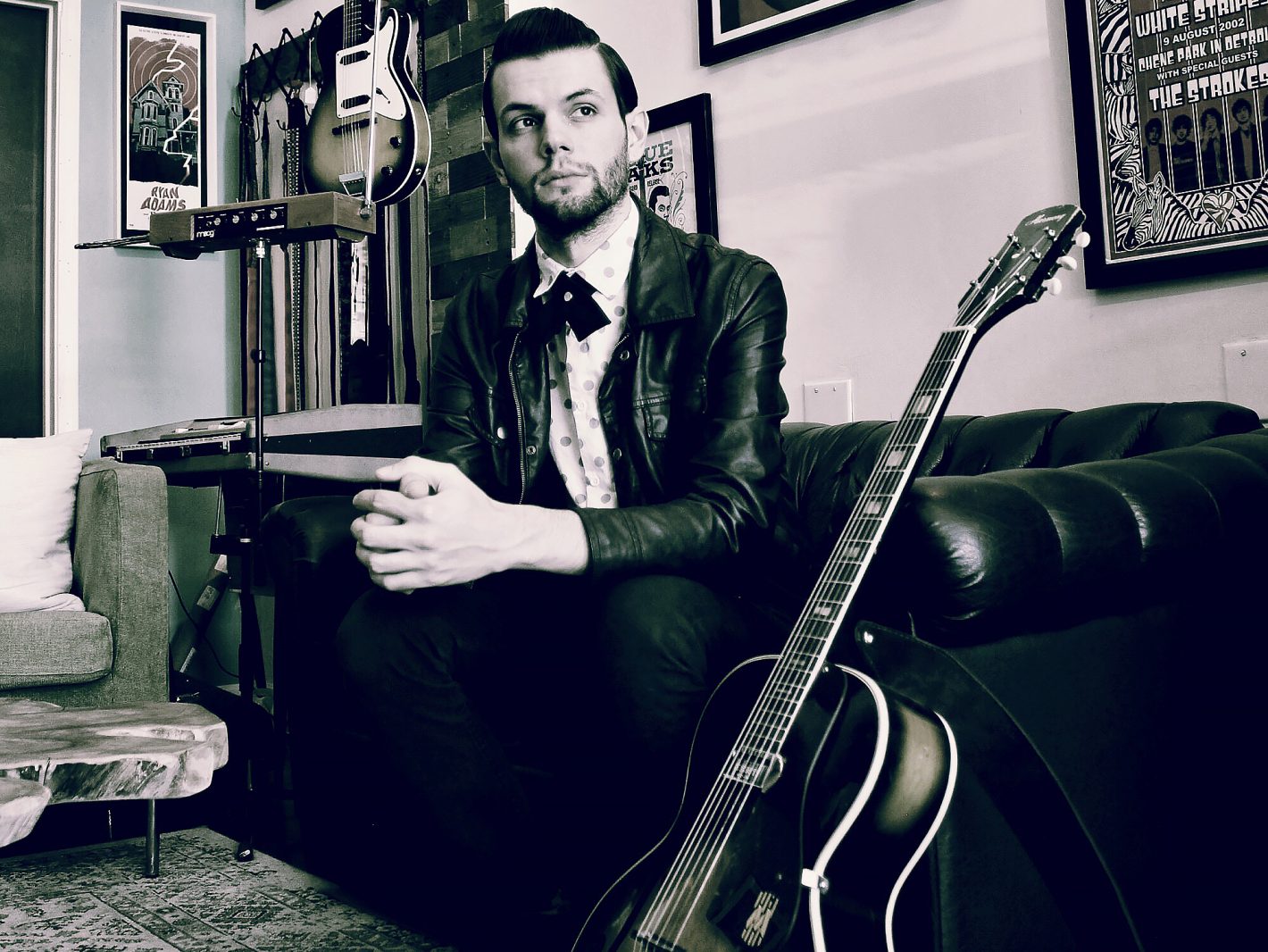 Folk singers are the novelists of the music world. Each song they write is a different chapter that ultimately creates the story that they wish to tell. Brendan Stone, lead singer and founder of Sacramento outfit Blue Oaks, makes more than folk music, but the music he makes follows the folk tradition in that it tells a story—one that he’s been wanting to tell for nearly a decade.

Stone doesn’t make simple folk. His music is often darker than not and takes inspiration from genres across the board. He might end up making a psych record if that’s the music he’s gravitating toward when he’s writing. Genre isn’t so cut and dry for Stone. A Blue Oaks tune may start with some guitar plucking that comes straight from the mountains, but quickly turns into a track that will remind you more of Kurt Cobain than Woodie Guthrie.

Adhering to genre just isn’t Stone’s thing. He expresses a deep love of all music and wanted to contribute more than what Blue Oaks puts out into the world. So, he opened Stone Vintage Music Boutique (1409 R St. Ste. 103) just a few doors down from Ace of Spades to create a space for Sacramento’s music community. The shop will be closing for a time, however, while Stone heads out on tour, and he has plans to eventually relocate to a new location so he can add a full-fledged venue to the space.

We recently visited Stone’s shop to talk to him about Blue Oaks’ new album To Be Kind is Sin, religion and letting go of perfection. Blue Oaks released its new LP on Oct. 13 with the full band, including longtime drummer Cody Walker, with a seven-deadly-sins-themed album release show Monday, Oct. 30, 2017, at the Clara Auditorium (1425 24th St.). 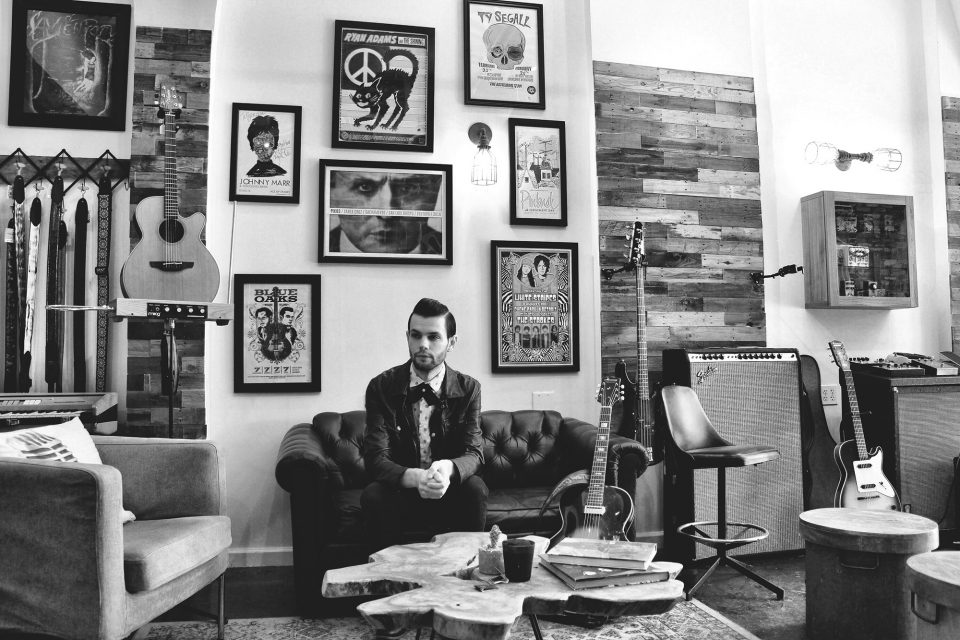 You got him to do it anyway?
That works out better because there’s no competitive nature. It’s just primal instinct, which sounds better in my opinion. I feel like that’s part of what made the White Stripes’ dynamic work—that Meg was kind of a terrible drummer but she could play with feeling.

It’s just you two?
We went from solo to two-piece to three-piece to two-piece to four musicians, and I think last time we played Harlow’s we had five. Then it went back to a full-band setup again. The record release we’re doing on the 30th will have bass, drums, guitars, keys, violin—the full shebang of instruments. It’s really cool because that’s always how the songs sounded in my head when I wrote them, but it’s not always possible to do [what you want] live. You can’t copy yourself and play all the parts.

Yeah, that’s true. Once you’re live, you have to compromise sometimes.
In the studio you can, which is cool, but not in real life. The To Be Kind is Sin album is interesting because a lot of the songs, the folk songs from the record, were back from when I was 17 through 19. It’s funny because I was more of a folk singer-songwriter playing open mics and kind of built an audience, then started writing. I was really getting into Leonard Cohen, Bob Dylan and Nick Drake at the time, so it was kind of just happening subconsciously. You’re just listening to so much of that, it comes off on your music. I got a decent following from that, and I probably could have recorded a folk record. Then I got into Delta blues and started realizing there’s a genre that’s like folk-blues. That’s kind of where Bob Dylan was going. It worked out in a way, getting into Delta blues, then I started writing songs like “Nicotine” that’s on the record and “To Be Kind is Sin” and I was like, “Woah, this feels much more like what I want to be doing.”

I still hadn’t recorded the folk record, and I had all these new songs and I felt like those [folk songs] weren’t who I was anymore. They were just, like, diary entries.

What was it like once Blue Oaks stopped being a solo project?
I met Cody and we started playing live and it just gets louder and louder as you play with a drummer. We started creating builds. Like the song “Nicotine,” it builds up from this John Lee Hooker shuffle and keeps getting heavier. It has very strong dynamic—it goes quiet, loud. That’s one of the things that good rock music is known for doing, like the Pixies and Nirvana.

All that early ‘90s stuff.
To be able to go down quiet and kick up, and we started doing that, which really derived from getting sick of people talking over you.

I can believe that.
When you play open mics, a lot of the people are very attentive and want to hear every verse. They’ll notice if you annunciate weird. Then once rock guitar comes into it, you can’t really hear annunciations at all. So, there’s this weird beauty, in that folk is so pure. When you end up on rock shows playing folk music, people just talk over you. It just gets really negative. It got to this point where I felt—not disconnected from the Sacramento music scene—but I felt we could do everything we could do at the time. I was putting in so much effort at the time. We had played most of the venues. We had done most of the interviews. We had gone out of the city and realized that playing out of the city was more fruitful than playing in our hometown, which was upsetting. I ended up moving to Austin. Living there and seeing a real music city that’s fully developed and has been for a long time, it’s amazing. When you’re there, you start to realize how oversaturated those cities are and how everyone is trying to “make it.” It overshadows people who are doing it honestly. I ended up spending most of my time working, not doing music and it was really isolating. I ended up missing my bandmate, Cody. I ended up going into the studio and hiring session players. We did all the songs. Going in with the session players, [the music] just kind of molded itself, but they didn’t play it how I wanted it.

They just played it the way it’s supposed to be played.
Yeah, and it’s nothing against them, but their job is to just come in and play the music. It’s not the same as you vibing with someone. Cody and I vibe together really well, always have.

It sucks because the songs were finally recorded, a lot of them sounded amazing and I paid a lot of money to be there. I could tell that Cody wasn’t happy with it and it wasn’t what the record was supposed to sound like. I ended up flying home after recording the whole album.

We recorded the whole album again in Placerville. We scrapped that, too. It sounded pretty close to what I thought it should sound like, but the quality wasn’t there. Then Cody and I thought we would go with a minimal approach and just recorded it with two mics in a room. Almost like the early Black Keys record where it’s just raw. It sounded really good, but it wasn’t the same. So, we ended up going into Gold Standard Sounds. It sounds exactly how it was supposed to sound in my imagination, which is a good feeling as a musician or as any artist. Like I [would] guess if you’re a painter and it comes out exactly how you want it. It’s never going to be perfect, but it’s just letting go of the idea of perfection and knowing that letting go is what makes it good.

You seem like a nice guy. Why is being kind sin?
I’m not going to tell what it means because I want to leave it up to interpretation, but it did come from a feeling I had growing up. The record embodies the human state, the good and evil within people and the eternal battles we have on a daily basis. I think that everyone has that, whether you’re religious or not.

There’s a moral compass in everybody.
One thing I noticed growing up is that a lot of the most righteous people were the most judgmental, hateful, negative people. A lot of the bohemian, hippie, goth, alternative kids were the most welcoming, open-minded, beautiful people. You have these judgmental people who claim to be of Christ-like descent, and it’s crazy to me that they are the ones that are seen as the non-sinners. So, the title derives from something along the lines of that. Asking “is to be kind sin if this is how the world is?”

No amount of religion is going to tell you about someone’s life experience.
The songs actually have a lot to do with that if you listen to the record. I try to leave it up to interpretation. I’m not a religious person.

I didn’t think so.
I don’t judge those who are. It’s no opinion of mine to do so. I don’t really appreciate being criticized for my personal beliefs either. It’s important that light is cast upon the things that people are too scared to talk about and the album has to do with that. I figured there’s no better title to call it because it encapsulates that feeling.