The origins of the band Brown Shoe stem from just outside the barbed wire fences of the Folsom prison. The members, all brothers, grew up so close to the prison that they fondly remember playing a game where they would see who could run closest to the barbed wire fence until the guards released warning shots. Ryan Baggaley, the self-proclaimed winner of this ballsy game, and older brother of the Brown Shoe clan, had plenty to say in a recent interview about brotherly love, X Street and being subtly bitter.

Brown Shoe formed almost 10 years ago as a mixture of friends and a couple of the Baggaley brothers. As time progressed, friends dropped out and were replaced with more Baggaleys. The final lineup consists of Ryan on vocals and guitar, Bryson on bass and drums, Aaron on keys and guitar and Landon on drums. The group is also known as “The nicest pack of bastards you will ever meet! Except not really, because we all know our dad—and have the same one!” according to their bio. A shared music nostalgia of Tom Petty and early ‘90s grunge (that has probably trickled down from brother to brother) influences the style of the band.

“We have a strong lean toward rock ‘n’ roll atmospherics. We aim for cleanliness and rhythm until climax,” says Ryan. “I love the suspense of suspending music until it just explodes.”

When asked about describing his music and the process of songwriting, Ryan says that music is often bogged down with the conformity of process. “We don’t walk into the studio with intentions. Someone will say ‘Hey, I wrote this song, let’s build on it and see what we can do,’ and then we sort of just feel it out. I like that we don’t bog the vibe down by making anyone explain what the song is about. We know a little bit, but then we just try to essentially get the same rhythm and sounds. There’s no need for discussion about it.”

One perfect description of Brown Shoes’ music is that it has mastered the art of being subtly bitter, consisting of beautiful, catchy and heartfelt tunes that tend to have a bit of snarkiness and backhanded intentions. The songwriting almost seems to teeter on the edge of classic rock with country song lyrics. The band has been compared to Sam Cooke and the Black Keys, but they prefer late-‘80s Bruce Springsteen, Sigur Ros and Arcade Fire: edgy and melodic.

Over the last 10 years, Brown Shoe has released five albums. This year, they are releasing a 4-part EP called Lonely Beast. Part 2 of the EP is out this month. They are also preparing to press the EP on vinyl and even cassette. Ryan elaborates, “Cassettes don’t necessarily mean a better sound. We are just excited to see how different our music will sound on tape as it ages. The ribbon of a cassette changes a little after each play, and the distortions that come with that sounds awesome.”

The foursome went from living a childhood in Folsom, to residing on X Street in Sacramento, to widening their California geographics and taking up residence in Los Angeles—a move they hoped would help them grow and keep them from feeling too comfortable.

“X Street and 26th in Sacramento was awesome,” Ryan says. “We lived right by the freeway and had a basement so we were able to play music essentially whenever we wanted because the sound was muffled by outside noise. We miss that amazing space. You also saw a lot of characters over there. For example, every night at an ungodly hour, this homeless man would whistle this very high pitched, abnormally birdlike whistle that would leave me and my brothers yelling obscenities out of our windows.”

As far as the music scene in Sacramento, “There are so many great things that city has,” says Ryan. “There are people in the community who realize the importance of strengthening a scene and giving it a platform. It’s all about community-based networks reaching out to traveling acts. We played the THIS concert series LowBrau put on last year, and we heard about LAUNCH now TBD, and the guys putting that on are just killing it. Putting large acts hand-in-hand with local acts is essential. It’s like potential is seeing itself grow into something extremely tangible and exciting.”

Recently, Brown Shoe released a video for their new song “Nightwalker,” about a friend who would tell them insane stories upon every interaction with him. One day, they asked the friend to sit with them and a rolling tape recorder and tell his life story in entirety. The results intrigued the Baggaleys, and they concocted “Nightwalker” in his honor, a beautiful tune with that subtle bitterness the band is so good at conveying. The video is dark and dusty with each brother dancing in shadows.

“My brother, Aaron, has excelled at the windmill as you will see in the video. It makes us all very jealous.” Ryan says. “Essentially we drank whiskey to the point where we could dance comfortably and feel it. I wish I could do that without whiskey, but my style is definitely to drink whiskey to get down.

“Sometimes we are close to gouging each other’s eyes out in the name of music. We will have huge blowups, but the cool thing is we almost immediately get over it. We are brothers and annoy each other, but we need each other,” Ryan continues. “Like with any band, you spend so much time with one group of people, you are bound to piss each other off.”

Ryan says the fact that they are brothers make them a bit more stronger and able to tolerate each other in an artistic endeavor like a band.

”We are a bunch of egotistical assholes and we are all the same. Therefore, we all get the pleasure of dealing with each other. We drink, we dance, we make music and we all actually really like each other.”

Welcome Brown Shoe home when they play Aug. 14, 2014 at Witch Room with Daniel and the Lion. Cover charge for the all-ages show is just $5, and it will begin at 6:30 p.m. Lonely Beast, Part Two is expected to be released on Aug. 19, 2014. Check out Facebook.com/brownshoemusic for more details. 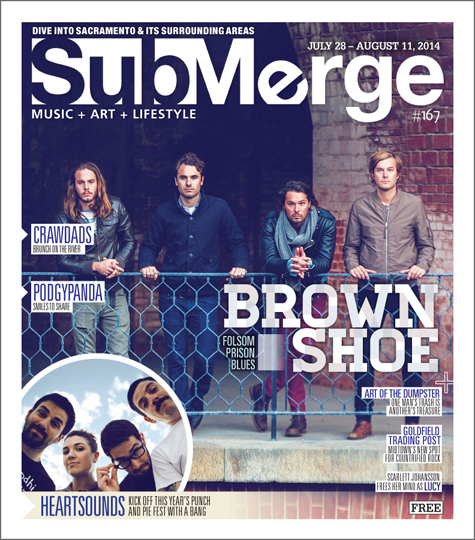