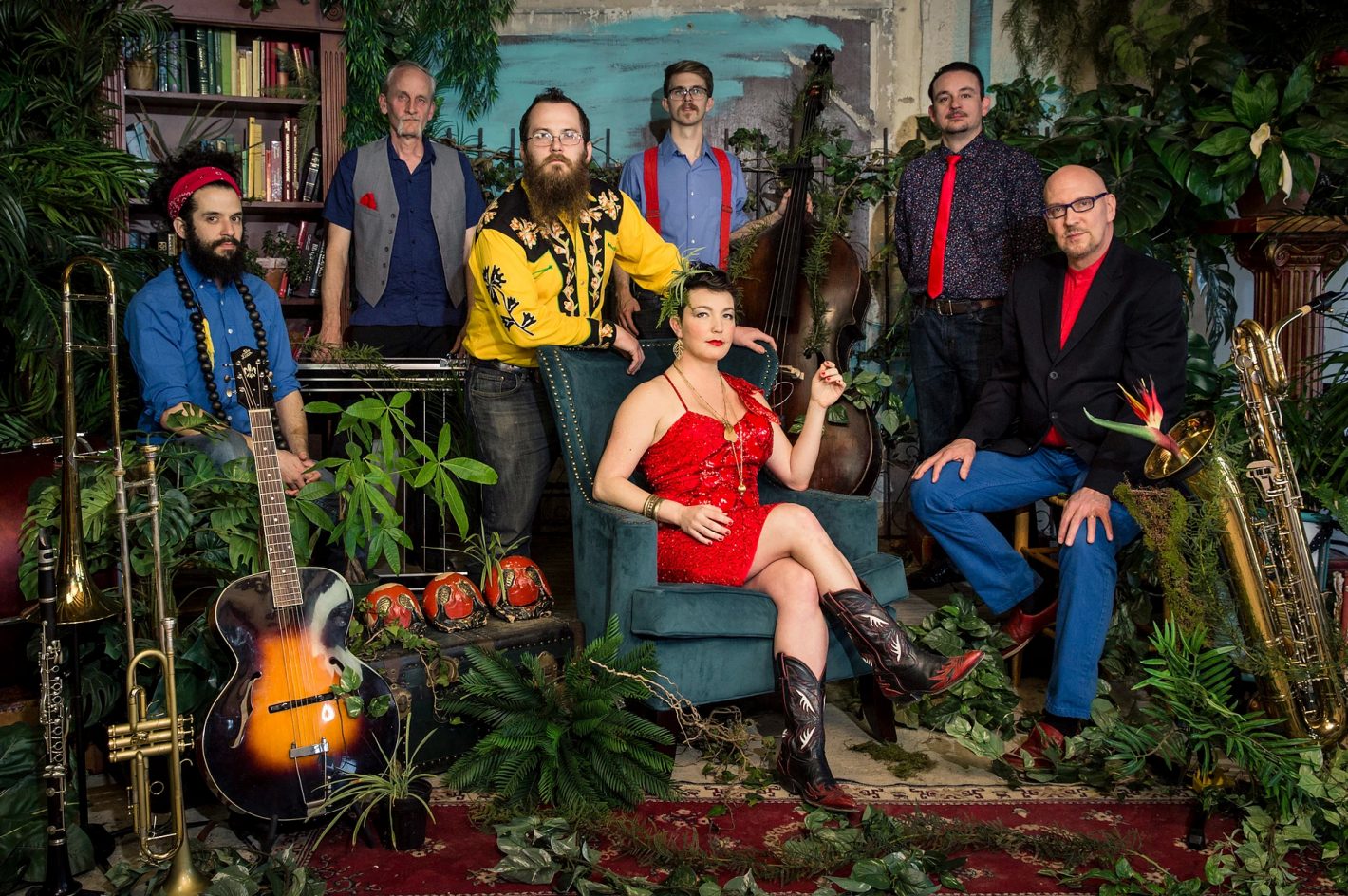 Walking through a wet and hailing day through the streets of downtown Grass Valley, I saw a concert poster in the window for a band called Bumper Jacksons. I loved the name so much that it stuck with me, so when the big boss at Submerge Magazine asked me out of the blue if I’d like to do a story about them, I felt it was meant to be. Bumper Jacksons were a duo founded by Jess Eliot Myhre (vocals, clarinet and washboard) and Chris Ousley (vocals, guitar and banjo) that organically grew into the six-piece band that it is today by adding Alex Lacquement (upright bass), Dan Samuels (drums), Dave Hadley (pedal steel guitar) and Joseph Brotherton (trumpet). The band’s name, however, came about through chance … and a little bit of bad penmanship.

“The name came from a band contest at a festival out where I’m from, the Berryville, Virginia area, which is close to [Washington] D.C. at The Watermelon Park Festival, which we’ve played a lot now,” Myhre tells Submerge. “Back when the band first started, before we were even a band, Chris and I … began as a duo and we entered the band contest before we had a name. Chris wrote down on a sheet, ‘The Lumber Jackson Five,’ just as a joke because we were a duo. I guess his penmanship might just be terrible, because the folks who read the name read ‘The Bumper Jacksons’ and ever since then it kind of stuck.”

Buried deep in roots Americana, Bumper Jacksons have a sound that’s both retro and current. It’s the kind of music you’d like to hop around to while a campfire warms your ass. I’ve Never Met a Stranger is the band’s most recent of three albums, and they plan on recording a live album and a new studio piece later this year. They’re a damn fun group that I’ve listened to frequently in the last week. I was thrilled to speak with Myhre over the phone to talk about the origins of the band, their influences and the underrated sexiness of clarinet music.

How long have you played the clarinet? Is this a lifelong thing or something you learned later?
Not in particular. I first started learning clarinet in middle school band where we were just kind of honking away on our little plastic instruments under the tutelage of a great guy who was my band director at my school in Stuart, Florida. His name is Al Hager, he’s known more for being a barefoot water skier. He’s such a cool guy. That’s when I learned, but I put the clarinet down in high school in an effort to try and be cool and not be in band.

I picked it up again much later, after college. I had moved to New Orleans after college and I heard traditional jazz music live for the very first time. I fell totally in love and was able to dig up my old plastic clarinet and [began] taking lessons and really learning how to play.

You don’t think of a clarinet as an instrument that people want to grow up and learn. It’s an oddball instrument. It doesn’t have a sexy reputation, but clearly its role in jazz and ragtime music, it’s pretty great. Do you get a lot of folks who are inspired by your playing?
Yeah! And I totally agree with you that it’s a unique instrument. Even now in jazz there really aren’t that many clarinet players, unless you are in New Orleans or New York. I really wasn’t concerned with that when I first heard traditional jazz. But it played a vital role in a lot of the bands that I was listening to and sitting in with. I noodle around with saxophones a little bit now, but I fell in love with the clarinet. There’s such warmth, especially in the lower registers. It’s so sexy. It’s such a beautiful, wooden, rich instrument.

There’s a song on your album Sweet Mama, Sweet Daddy, Come In called “Si Tu Vois Ma Mere” that’s amazing. It’s a really sexy song. It’s beautiful. The clarinet was wonderful on that. I hope that was a clarinet and I’m not being ignorant.
That was a clarinet. Something that’s really neat when we tour is that we’ll do an outreach workshop with the schools that are part of what we’re doing. It’s super fun. I love being a woman in music and a woman bandleader, and that is very inspiring for a lot of the students in band. When other musical groups come through and talk to the jazz bands and such, I don’t know how often they get to see anybody play clarinet. I think that’s actually a pretty unique thing for a lot of the younger musicians. It’s the same thing with the pedal steel. When we come in and do clinics or performances for schools, so many of the students, unless we’re in the state of Texas, are like, “What is that thing? Wow!” They want to ask our pedal steel player Dave what this instrument is that can make these ethereal sounds.

How would you describe to a layman what it is that Bumper Jacksons do?
I would say the most accurate term for what we’re doing is American roots music. We draw from a variety of many earlier American styles and genres and that encompasses anything from country, to swing, to blues, bluegrass, ragtime, jug band even. So we draw influences from a lot of different stuff in the American roots tradition. But I think Americana would fit what we are doing also because most of our songs are originals. They’re coming from a contemporary place and lyrically they are contemporary. But our sounds, the forms, the kinds of melodies we choose are definitely rooted in these earlier forms of traditional American music.

On your website bio, it says you built for yourself your “iconic frog washboard.” Is that a washboard with a frog decor, or is that a term for a washboard?
It’s referring to these board blocks that are at the bottom of my washboard. They’re pitched wood blocks but they’re all shaped like frogs. Visually, it’s a really exciting instrument for people to see from the stage.

So I imagine your concerts are like a party. Do your fans make an event of it by dressing up and dancing around?
Yeah, we definitely play dances and those late night tent festivals where people are dancing, but we’re playing a seated show, we have the ability to do more storytelling. We bring people more into the moment through stories and bringing it down and being a lot quieter as well. Our show will adapt to whatever space we’re playing in. But, yeah, our music tends to be very upbeat, exciting, uplifting and joyful.

So you work a lot of storytelling between the songs?
Yeah, Chris, especially … We’ll often introduce the songs either with stories from American history, or stories from own experiences. I think that music lovers love when they hear the back story about why we’re choosing something to play and reimagine a certain traditional song, or where we were coming from when we wrote a particular original song. We like to weave different forms of storytelling into our concert. It really helps us connect with our audience on a deeper level.

What are some of your influences from the era that you’re drawing from that you’d recommend people take a listen to and learn a lot from?
I am very inspired by female vocalists from the last 100 years or so. When I was younger I’d listen to artists like Madeleine Peyroux or Eva Cassidy. They were kind of my gateway drugs, as it were, to earlier forms of jazz. Eva Cassidy is a D.C. artist that has a beautiful voice. It was through listening to their music that I ended up listening to Ella Fitzgerald, Billie Holiday, Dinah Washington and Doris Day. I really draw a lot of how I phrase from the early jazz singers from the ‘30s and ‘40s.

Something that I think is exciting about our band, in general, is that every member comes to the table having mastered a different kind of traditional music, so we’re able to blend these different traditional types of music and genres in a unique way. For example, Chris comes from more of a bluegrass and old-time Appalachian background. Our trumpet player, Joe Brotherton is definitely a jazz guy, so he brings a lot of those sounds and harmonic choices.

Tell me about your upright bass player Alex Lacquement.
Alex is great. He studied jazz performance in college and graduated with a Masters in music education. He’s all over the map. He studied jazz, but fell deeply in love with bluegrass and the old-time sound. He’s mastered many different American genres. Alex just came up to us and said, “Hey, I think you need a bass player!” He sat in with us and we said, “Yeah, we do!”

And now you need a bigger van.
We took the plunge and went into a deep pile of debt and got a Sprinter with a special cabin to hold all of our gear and stuff. We tour around the country in that thing, often with my baby as well.

You can enjoy a great night of music and fun while helping Bumper Jacksons pay off their van debt courtesy of The Center for the Arts in Grass Valley on Wednesday, March 20 at 7:30 p.m. The show will take place at the Grass Valley Elks Lodge (108 S. School St.), and tickets start at $25 for the general public ($20 if you’re a member). For more info or to purchase tickets online, go to Thecenterforthearts.org. You can find out more about Bumper Jacksons and listen to their latest song “Miss Mary Mack” on their website, Bumperjacksons.com.