A good friend warned me about using the word unique, because as he said, few things actually are, but Butterscotch’s music warrants such a bold claim. Meshing her classical piano training and angelic voice with a more unconventional method of making music with her mouth, Butterscotch has elevated the art of beatboxing to uncharted levels of musicality. Tactfully integrating the beatbox into more predominant elements of jazz and soul music, she in turn embodies the living spirit of hip-hop. As she said without hesitation, “If you already have hip-hop in your veins, it comes naturally.” Despite her age, the soft spoken 22-year-old Davis native, who last year was a finalist on NBC’s America’s Got Talent, was the international Women’s Beatbox Champion in 2005 and toured the world with Mike Patton as a member of Peeping Tom.

Butterscotch is equally grounded and humble by her talents. Her music defies any one genre, and she remains focused, dedicated and determined as she preps her debut album. Butterscotch welcomes the challenge of changing the face of music.

I know you grew up playing and studying classical music, when did you discover hip-hop?
I grew up listening to it, basically since the day I was born. I was the youngest of five kids, and my brother, he was like my biggest hip-hop influence. He was listening to Public Enemy and N.W.A. I just loved hip-hop. I played piano and guitar, but I didn’t start beatboxing until my senior year of High School. LeeJay—he’s a beatboxer—he was one of my friends and he introduced me to it. I had seen and heard Doug E Fresh and Rahzel, but I didn’t really care to do it until I met him. I picked it up like any another instrument I played. I didn’t take it too seriously, but then in 2005 I got an offer to go to the world championships in Germany and actually won the championship, and it took off from there.

You mentioned you were introduced to beatboxing through a friend, when did the idea come to merge that in with the piano?
It came pretty soon, like right after I started beatboxing. I would just be messing around trying to play the piano and beatbox at the same time, ’cause I thought it would sound cool. I’d seen people beatbox and sing, but I’d never seen anybody beatbox, sing and play the piano, so I started to do that.

So the singing evolved with the piano and beatbox as well?
Yeah, I mean I don’t remember how it all happened. I used to write a lot of songs, but once I found out about beatboxing I got stuck on that and did that for a couple years. I still played piano, and did the whole piano and beatbox thing, but what’s happening now is I’m writing a lot. It’s just a balance trying to sing and play the piano and other instruments as well.

Did you realize when you started blending it all together just how unique it was and that it could turn into something bigger?
At first I was doing what I was doing. I was always experimental with my music, so I didn’t really think anything of it.

To change the pace, you were on the last season of America’s Got Talent. Do you have any good Hasselhoff or Springer stories?
Jerry was really cool; he was a really cool guy. He would always try to beatbox, and he would show me new hip-hop dances he was learning and then ask if he could be one of my backup dancers. We didn’t really have much interaction with the judges, though, just for legal reasons.

Was it weird for you, someone who is performing at such a high level of musicality, to be critiqued by someone like David Hasselhoff?
I mean, they never really said anything that negative to me except that they didn’t like my outfit one time. But I guess the choice of judges was kind of interesting, just based on what they’ve done. It’s entertainment, though, so you know.

That’s probably the best answer you could give right there. Again to shift gears and wrap things up, what is the next step for you and your music?
I’m working on my album right now, and I’m trying to do it independently so I can keep my artistic freedom. Combining everything I know with one product”¦ A lot of albums these days lack concepts so that’s what I’m trying to bring with this. I want to see a change in music and what’s popular because there is a lot of crap out there.

What you’re doing is so different, and a lot of people might not understand it at first. Does that affect how you approach things?
The cool thing about music is that you don’t have to talk; you just have to listen and feel whatever you feel. It’s cool with beatboxing, because I’ve performed to people from 80 to 2. I performed at this Rotary Club a couple months ago and it was the funniest reaction, because people were laughing. It wasn’t like they were laughing at me, they were laughing because I guess they couldn’t believe what they were seeing. I’m fortunate that I’m able to bring it to different ages of people. 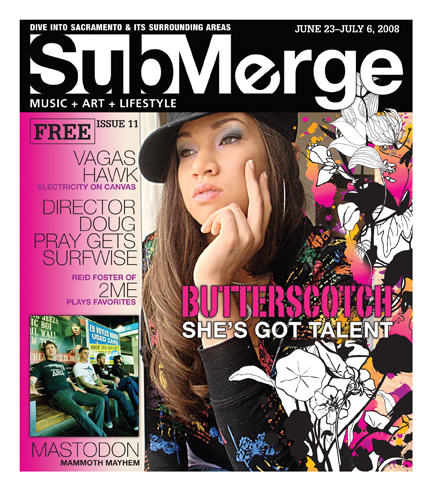