Cage the Elephant’s Matthew Shultz Faces His Fears on Melophobia

Chances are, you’ve heard of Cage the Elephant. After all, that’s not the sort of band name you really forget. And in the five years since the their debut album, conveniently also titled Cage the Elephant, the band has certainly done their best to make their music equally hard to forget, hitting a palatable sweet spot between the trendy ‘70s revival blues of bands like The Black Keys and harder edged Janes Addiction-style psych rock. And it’s been a winning formula so far, forging a string of hits—“Ain’t No Rest for the Wicked,” and “Back Against the Wall,” from their first record; “Shake Me Down,” from 2011’s Thank You Happy Birthday and the latest, “Come a Little Closer,” the first single off their recently released third album Melophobia—and catapulting them from their sleepy college town roots in Bowling Green, Ky., to being bona fide rock ‘n’ roll titans. From Letterman to the MTV Video Music Awards, to arena tours with The Foo Fighters, to video game trailers, to pretty much any rock radio station on the dial: even if you haven’t heard of Cage the Elephant, if you’ve been alive the last five years, you’ve at least heard Cage the Elephant.

For his part, frontman Matthew Shultz seems to be both a reluctant, and an ideal, rock star, demure but confidently cool. In light of the band’s relatively successful first two records, the title of their third effort, Melophobia, the fear of music, would seem to suggest that the band was perhaps feeling the pressure of following success with more success. But speaking by phone from his home in Kentucky ahead of a string of radio shows (including headlining Radio 94.7’s Electric Christmas, Dec. 4 at Sacramento’s Sleep Train Arena), Shultz said the only thing that he and his Cage the Elephant band mates feared when writing and recording the songs on markedly more eclectic Melophobia, was fear itself.

It’s been about a month since Melophobia came out. How has it been, being on the record release cycle for the third time now?
I think that with each record that you release, there are new things that arise. Hopefully as your band evolves, the way you present your music and creative works also evolve. But it’s been really cool to see how we’re three records in and people are still responding. So I guess that’s a good thing, right?

You guys have worked with the same producer, Jay Joyce, for all three of your records now. Is that just a case of “if it’s not broke, why fix it?”
From the very first moment we met Jay, he was one of those kindred spirits and it felt right from the very beginning. He’s never been one to shy away from confrontation, but he’s not a confrontational person. He has an incredible ability to pull things out of you. You know going into the studio that the songs are probably gonna change quite a bit when you’re in there, because if he feels that something isn’t up to par, he’ll tell you, which is one of the beautiful things, one of the things that will drive you crazy. But it always produces good things. He pushes us real hard, but we get along. So we continue to work with him.

The title of the new record, Melophobia, translates to “fear of music.” Was that just a cool word, or is there a deeper meaning to that?
Well for us it’s not so much of a fear of music, as in an actual fear of music as it is a fear of creating music to fabricate, or to create some kind of image of self. Sometimes we build these images of how we like to be perceived and that takes over the creative process rather than just trying to communicate an honest thought or feeling. So it was more like a fear of fear-based writing, writing with all kinds of fears and safeguards to create an image rather than to communicate a thought, if that makes any sense at all.

Was there any pressure, writing these songs or in the studio to try to live up to the success of your first two records?
The pressure didn’t come so much externally as it did internally. With each record you get to learn some things along the way and hope to be able to apply them to the creative process. I think for us it was just that we wanted to become better communicators, definitely didn’t want to be so directly externally influenced as we had been in the past. So there was a little bit of pressure, externally, but most of it came from within ourselves. Just to make a record that we loved and that the people would love. But it wasn’t really dictated by the past success of the band or anything like that.

Was it a fear of sort of wearing your influences on your sleeve?
It wasn’t so much a fear of wearing our influences on our sleeve, as much as it was just being so directly influenced in general. And I think that all goes back to fear-based writing, too, because as we were talking about earlier, as human being we’re working tirelessly to create images of ourselves and project those images, and so that limits your creative works. As human beings we tend to lean towards things that we see have already become socially accepted as cool or artistic or poetic, and so we start writing poetry for poetry’s sake or making art for art’s sake or creating things to sound intellectual, rather than trying to communicate an honest thought or feeling. So it was really a battle against fear-based writing or fear-based creation; trying to get back to the root of songwriting or any creative work for that matter, which is communication, to communicate a thought or a feeling or a freedom or a moment of joy or happiness or whatever it is, but just to communicate freely and honestly. And in doing that, I think you do shed some of those influences, or they’re probably not as noticeable, because you’re just drawing from the things that have woven themselves into your heart rather than catering toward cool.

Do you think that your past successes sort of gave you more of an opportunity to do things the way you wanted this time around, maybe more so than on the first two records?
I think that if we were a band back in the ‘80s or the ‘90s when the music industry was thriving that probably would be the case, but the way things are going you can’t really say that anyone today is completely established, unshakable or unremovable. Because everything moves so fast. For us, it wasn’t a comfortable thing. It took a lot of convincing ourselves just to go for it and to chase after this theory. But I think you have to take chances. I think the greatest accomplishments are made by taking very huge risks.

So what’s next for you guys, what’s the next risk you’ll take?
I don’t know, I hope that we continue to push this forward. For me, it’s learning all along the way, and hopefully becoming better communicators, and understanding more of what that means. Music has always been a communal thing, to share thoughts and feelings. When you speak to people, you have to speak from your heart, but it’s best if you speak their language. If that makes any sense… It’s just trying to learn how to speak to people, to communicate, and to do it honestly.

Don’t be scared… Check out Cage the Elephant as part of Radio 94.7’s Electric Christmas at the Sleep Train Arena on Dec. 4, 2013. Also performing? Glad you asked: Alt-J, Grouplove, Capital Cities, The Features and MS MR. Check out Sleeptrainarena.com for more info and ticketing information. 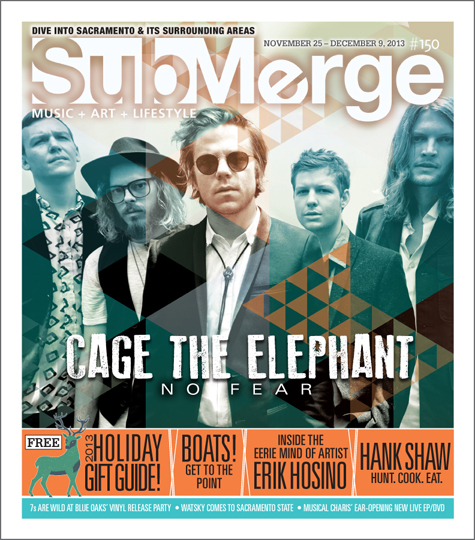