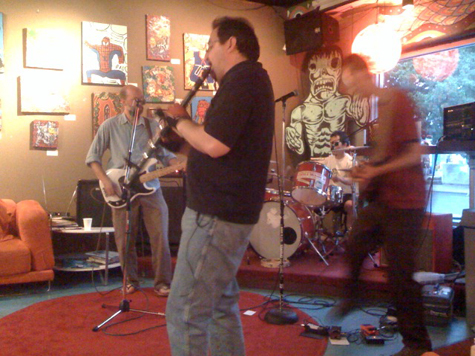 Sunday evenings for me are usually reserved for the couch, a six-pack and a movie. It’s like clockwork. So naturally I found myself in a bind when I learned there were some killer bands set to play at Javalounge last Sunday. It was indeed a tough decision, but ultimately I determined it was good to get out of the house and go see a very small, intimate show. It was a wise choice. 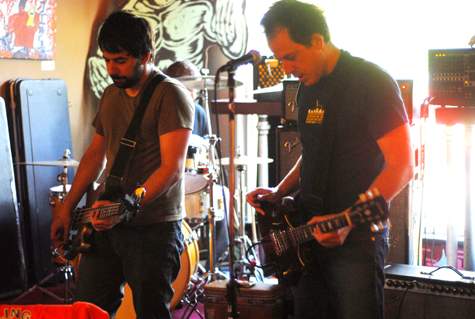 As I walked through the doors of the small coffee shop I immediately thought to myself, “I bet everyone is laying on their couch watching a movie,” because there was maybe nine people inside, including San Francisco’s indie-fuzz rock group Calling All Monsters. As the band began their set, I quickly realized that all those not in attendance were missing out big time. CAM’s songs were short, sweet and jam-packed with loud fuzzy guitars and shouted vocals. None of the songs seemed to last more than three minutes, which gave the set a very punk rock show feel. They earned brownie points for that right there. Overall, Calling All Monsters’ set was very fun to watch and ended much too quickly. I highly advise you check these guys out if you like loud, feedback riddled rock ‘n’ roll crafted in a tasteful, elegant manner. 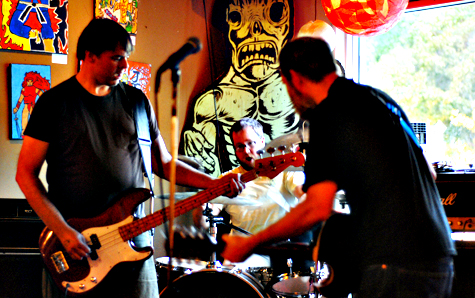 The next group of bearded men set to play was West By Swan out of Chico. I’ll be honest; this was the band I really came to see. I have had the pleasure of witnessing them perform many times and never once have I been disappointed. I think it’s mainly because they sound like two of my favorite bands that are nothing alike (Fugazi and Explosions in the Sky) all mashed together. After a spacey instrumental intro full of ambient noises and guitar loops via vocalist/guitarist Dan Greenfield, the group launched full force into their heavier distorted songs. Toward the end of the set Dave Greenfield (guitar) pulled out an electric 12-string guitar, which added an awesome chorus effect. The rhythm section, consisting of Daniel Taylor (drums) and Conrad Nystrom (bass), played so fiercely that my cup of water had ripples in it. I found this to be quite humorous because I had been watching Jurassic Park right before the show and the T-Rex was causing water in puddles to ripple. So, I guess you could say that West By Swan rocks as hard as a T-Rex walks, which is real hard. Keep an eye out for these guys because I know they will be back soon, hopefully with their new record (rumor has it it’s almost done) in tow.

As the third and final band began to set up their equipment I realized they had a clarinet player and I was immediately intrigued and excited to hear what would become of this rare instrumentation. I soon learned they were dubbed San Kazakgascar, a local group made up of Jed Brewer (vocals, guitar), Greg Hain (bass, vocals), Paul Takushi (drums, vocals) and Mike Woo (clarinet, vocals). As their band’s name suggests, they have a very Middle Eastern vibe. About halfway through their set, Brewer introduced the song “National Anthem of San Kazakgascar” by saying, “People have trouble with our name so we wrote a song where we say it over and over again.” It was definitely effective because after that song I had no problems trying to properly pronounce their name. That’s damn good marketing right there, all bands should have a song where they just repeat their own name. OK, maybe not all bands. Anyways, San Kazakgascar plays a very interesting and unique (at least to this scene) style of music full of vocal chants and barks and all kinds of other fun noises. I suggest you step outside your comfort zone and give them a shot. I did, and I don’t regret it one bit.