Cawzlos Weighs In On His Art and Business

Carlos Lopez wasn’t born a musician. The allure of MCing isn’t what led him to a lifelong devotion to hip-hop. However, over the last 10 years that has been the road he has followed, and while at points throughout he has questioned his position, music has remained a vital element of his livelihood. It’s a part of everything he does, and when you hear him, it shows.

His innate creativity and desire to express it led him to graffiti, where he first earned his stripes. After feeling limited by the confines of graffiti, and under the influence of various other stimulants, Carlos began to explore the art of language, more specifically his lyrical capabilities. It was from there that Cawzlos emerged. A fixture on the scene for a good chunk of his life, Cawzlos has found a way to mesh his musical side with another passion of his: business. With a plate full of projects and opportunities on the table, and the energy and ambition to carry the load, Cawzlos is making sure that he will be heard one way or another.

To start off can you give a brief history of yourself up to the present?
When I was 14 I went to a school called Hiram Johnson, which was a GATE program school, and I was the opposite of that. I met Adam McIntyre there”¦ They call him Ef Double, and he was doing the graffiti thing. From 14 to 18 I was just doing straight graff, like really in the streets and staying present with the graffiti. That was when I started getting high, too, and venturing out in the mind a little more, and everyone was talking about freestyling. I didn’t give a fuck about music or rapping or any of that until I was like 18. I didn’t realize what I was doing, but people would be like, “Man, you need to rap and pursue that.”

One thing led to another, and graffiti kind of got played out to me, and I felt like what I put on the wall just represented what I put on the wall, like it didn’t represent me. Graffiti is a secretive world, but I’m a real loud person and very vocal; I wanted to be seen and heard, and that’s all I wanted. Around that time we started the Cawz, which was me and Adam, this dude Byron, and Jeremiah, and it took about four years to finish our first album, which is called Tracks. We were doing a lot of shows, and a lot of promotion type campaigns, and that is when graffiti and music really clicked for me, like, “OK, I can use my graffiti mentality of just getting out there and representing and mixing that with marketing and promotion.” was never like, “Carlos is a great rapper,” or, “Carlos is a great performer,” was like, “Carlos is a great promotion guy.” Adam was a great rapper, Byron was a great rapper, Jeremiah was a great producer, I just instilled the hustle into the circle. That was like ’97 or ’98. 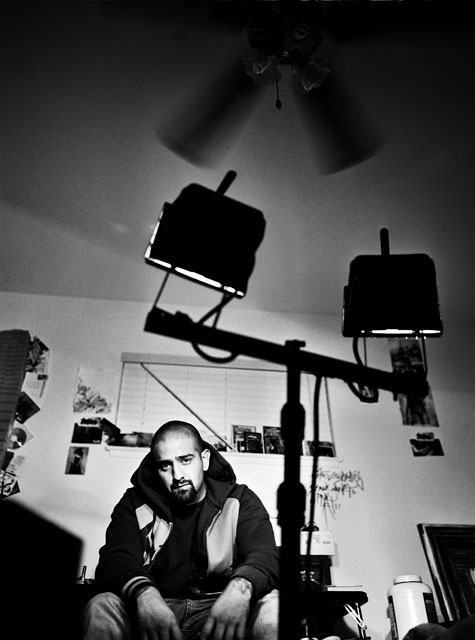 When did you recognize that you had the potential to do something
with the rapping?
We all moved to LA and got management out there, and even then I was still real insecure. I knew I could do it, but I would play the background. It wasn’t until we moved back to Sacramento that I really started stepping my game up. When the Cawz broke up though, that’s when I was like, “OK, I’m not gonna stop this now, I’m too deep. I’m feeling this too much, I gotta get better,” and that’s when everything started happening. That was like four years ago. I started buying gear, and recording tons of songs. I was naturally a poet, but rhythmically I wasn’t there. It wasn’t until a year ago that I got signed by a guy named Michael Concepcion in LA, and that was when everything started to get serious. I had to be elite, because I was around elite people. I ended up getting shelved, and that made me realize I was closer than I’d ever been, but I still wasn’t the guy. But in that year, I studied real hard, and got better, and now my bar game is vicious. I always knew I was meant for this, but I just didn’t know my position. I thought I was just the CEO, or the marketing director, but now because of my studies, I feel like I can do all of that and be that dude on stage.

It’s crazy because when I listen your music, you speak with so much passion, it just sounds like it does something for you much deeper than just spitting out words.
I’m a real spiritual and deep person, and I’m trying to bring a message to what I’m doing. If I didn’t find music, I would be strung out on drugs, hands down. It was never about the money. I come from the graff scene where it’s all about recognition and never about the money, and I still carry that in my music today. I’m 27 years old and people come up to me like, “You gotta get your money,” but I always say it will come. If the money comes, it comes. I know what I need to do, but I don’t do it for that. I don’t know why I think that way, I just do. I’m not in the record sales business. Cawzlos is not here to sell records; if I sell a record, that’s cool. I want to go platinum selling T-shirts or whatever.

To wrap things up can you talk about what you’re up to at the moment?
Right now I’m working on some new stuff with Jeremiah to take on the road. I’m doing some tour managing for these guys MC Rut, Middle Class Rut, and they produced two of the songs on there. MC Rut is like number three on KWOD right now, which is real good for independent group going heads up with mainstream acts. Warner Brothers is putting us up in LA; they’re playing El Rey. I’m also managing my cousin, M I Gezzus, who is real dope. I also started a record label with Ahman aka Wisdom, Josh aka 26Hrz and Mathie Bush called Trendsetters, and our saying is, “Being yourself is in.”

Is there a time when you think you will put the music aside and strictly be doing the business side of things?
Yeah I could see that. Right now being an artist comes first.