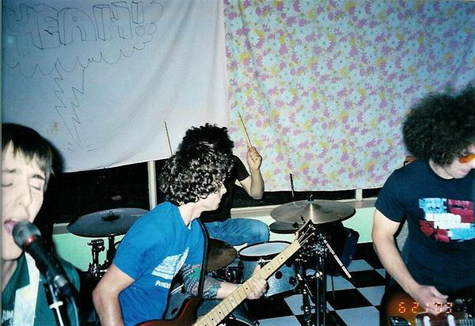 Beloved Sacramento band Mister Metaphor to reunite for one night

Bands form and break up all the time; it’s what they do. What’s extremely rare, though, is for a band to become more popular after they’ve broken up, to gain hype without even playing shows, with no self-promotion whatsoever. Such is the case with Mister Metaphor, a Sacramento-based four-piece post-punk/experimental group who had a good, albeit rather brief, run back in the early to mid-‘00s. In order the achieve this sort of post-break-up popularity, one thing is for certain: the music has got to be really, really good to withstand the test of time, to remain relevant throughout the years and to not get lost in one’s CD booklet or erased from one’s iPod. Mister Metaphor’s music had all the ingredients: It was technical and highly skilled, but not so much as to make your head hurt counting time signatures; it was fast and high-energy, but not enough to scare people away; it was melodic and memorable, but not too pop-y or sugarcoated to make you want to vomit when the chorus came around. Their music had a little something for everyone, and it struck a chord with those who were lucky enough to discover the band, whether during their time together or after the fact.

Mike Sparks, Mister Metaphor’s co-guitarist/lead vocalist (who later went on to form the band Bridges, which ultimately became By Sunlight) knows first-hand the capability of good music to spread. “As the years have passed, especially the last three with all the touring that By Sunlight has done, one out of every two shows we‘ve ever played on tour some kid has come up to me and said, ‘Are you the guy from Mister Metaphor?’” Sparks admitted to Submerge during a recent interview. “For a lot of people during that time frame, it just sort of got to them. It was what they wanted to hear.”

Justin Goings, Mister Metaphor’s drummer (who has played in a slew of credible bands with regional ties including Playing to the Grandstand, O! the Joy and Jeepster), has had a very similar experience since they disbanded. “I’ve talked to so many people that have said, ‘Man, I never got to see that band and that’s one of my favorite bands,’ and I’m always like, ‘Wow!’ I’ve met so many people like that after the fact,” Goings said. Again, all of this is rather surprising considering that Mister Metaphor was only a band for about three years, played less than a hundred shows and put out two EPs, only one of which ever saw a proper release (Die on the High Road, released on Omnibus Records). “It was really brief,” Goings said of the lifespan of the band. “It went by really quickly. It was like going down a chute or something, and I got spit out the other end and I was like, ‘That’s it?’”

Turns out, that wasn’t it. Earlier this year, Francis Eastman, a good friend of the band and member of Oakland’s Echo Location, proposed to Sparks that Mister Metaphor should reunite for one last performance. “It was the end of the night after some show, and me and Frank were a little drunk and we were sitting out on his front porch,” remembered Sparks. “Basically, he asked that because he was turning 30 this year he wanted to have a Mister Metaphor reunion show.” Sparks agreed, contacted the other members and it was eventually set in stone: Mister Metaphor would reunite for one show on Nov. 6 at Townhouse Lounge in Sacramento. But who was this Eastman guy and how did he have enough clout over the band to coax them into reuniting after all these years? Surely the members of Mister Metaphor had been bombarded with random requests to reunite many times before, so why now?

“He paid for our last EP,” Sparks admitted with a chuckle. “He paid for it outright. It actually got recorded about a year or maybe even two after we were broken up.”

A-ha! Now it makes sense why Mister Metaphor owed it to Eastman. He had done them a huge favor years before by funding a trip to The Hangar to work with engineer Robert Cheek to bust out five songs they had written but never captured on record. Doing this show was a simple matter of paying Eastman back then, right? Wrong. It’s deeper than that. “It was a little bit more than that,” remembered Sparks. “He’s a really good friend of ours. And honestly yeah, fuck; we do owe it to him. But it just felt kind of right. We never really had a farewell show or anything. The band just disintegrated really, really rapidly.” Sparks recalled that they had attempted to do one final show after recording the Eastman-funded EP (which never was officially named nor released, it was only available online for free download via the band’s now-defunct website), but that it never worked out.

This time felt different. “It just felt like a good thing,” Sparks said. “Of course he instigated it, but I think all of us had this weird lack of closure or something. We never got to just stand there one time and go, ‘OK, here we are.’”

Thanks to Eastman, whom Goings even described as “somewhat of a fifth member,” that chance is finally upon the members of Mister Metaphor. They finally will get to stand on a stage and pay respect to each other, to their supporters, to the music and especially to Eastman. “This whole thing is happening because of him,” Goings said. Since it seemed like Eastman was such a pivotal part to this story, we contacted him to ask what it is about Mister Metaphor that he loves so much. “At this point, the band reminds me of a period of my life that cannot be replicated,” he said. “The original Capitol Garage always had rad shows. The local scene was putting out amazing music, and we were all sharing an apartment and doing stupid shit in our early twenties.” Everyone can appreciate that. Hearing certain bands can take you to a different time and place. Good friends, good music, good times: the recipe to so many of our upbringings.

“I feel like the big thing beyond basically saying thank you to Frank for paying for our record is I don’t feel like we ever got a chance to thank everybody who was enthusiastic about the band,” shared Sparks as our conversation came to a close. “It’s going to be an emotional night. There were a lot of feelings invested in this band, and I can’t wait to get all that energy in one room. It’s going to feel good to celebrate that band the way it deserves.”