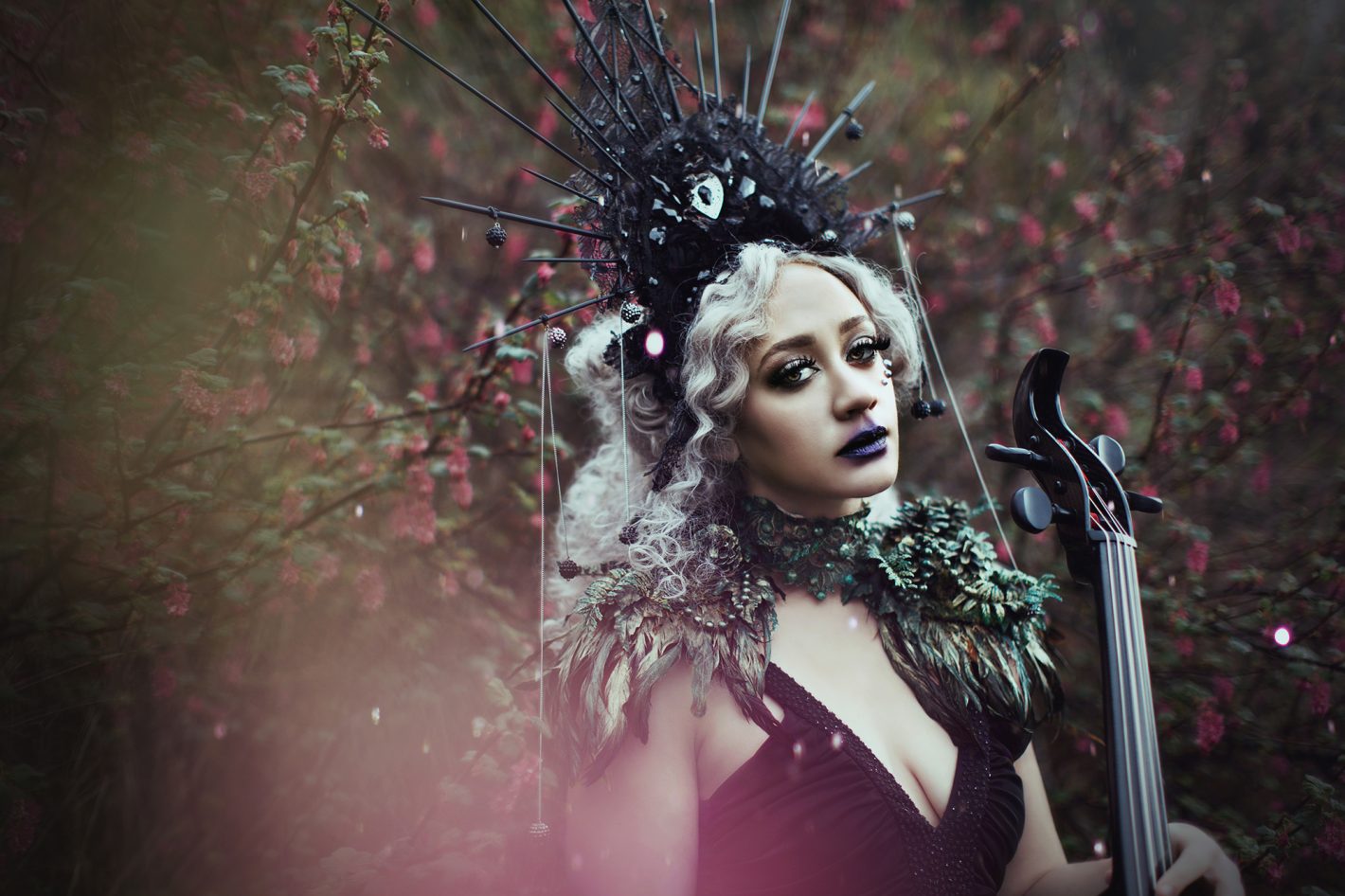 Bust out your contact mics and start digging through your field recording archive, because NorCal NoiseFest (Oct. 4–6), the longest running noise, experimental and outsider music festival in the country, is upon us once again. It’s difficult to consistently find an outside-the-box interviewee for a lineup that is, by its own description, all outside-the-box. Like Crank Sturgeon, whom we interviewed for last year’s festival, the classically trained cellist, performance artist and author Cellista sets herself apart by the sheer variety (not to mention production value) of what she does.

Originally from Colorado, the San Jose-based artist is currently touring in support of her third album, Transfigurations, which is not just an album, but also an entire accompanying 86-page book, replete with liner notes, soul-bearing personal essays and writings from her father, Frank Seeburger, a professor of philosophy at the University of Denver. She’ll be the only artist at NoiseFest with a Heidegger reference in her work, I assure you.

The album takes up a similar theme to her previous release, Finding San Jose, dedicated to the “arts community of downtown San Jose.” Yet while that album was an at-times wistful paean to her adopted city, Transfigurations is much darker and focuses on the damage (both demographic and cultural) caused to San Jose by gentrification. The track “Look Homeward, Angel,” with lyrics from rapper Dem One, addresses this theme head on and is an excellent example of Cellista’s orchestral work. Beginning with a combination beatbox-and-cello rhythm, Dem One’s raps then give way to award-winning soprano Melissa Wimbish’s operatic vocals as the simple beat gives way to a full chamber ensemble.

The different tracks named “Rupture,” which mark mini-movements in the album’s overall suite-like structure, are mostly found-sound collages punctuated by static and noise. From recordings of Black Panther rallies to loops of Donald Trump audio, Cellista makes her political project clear from the album’s very first tracks. Though her sound is as varied as the myriad mediums in which she works, one thing is clear: Cellista has something to say. 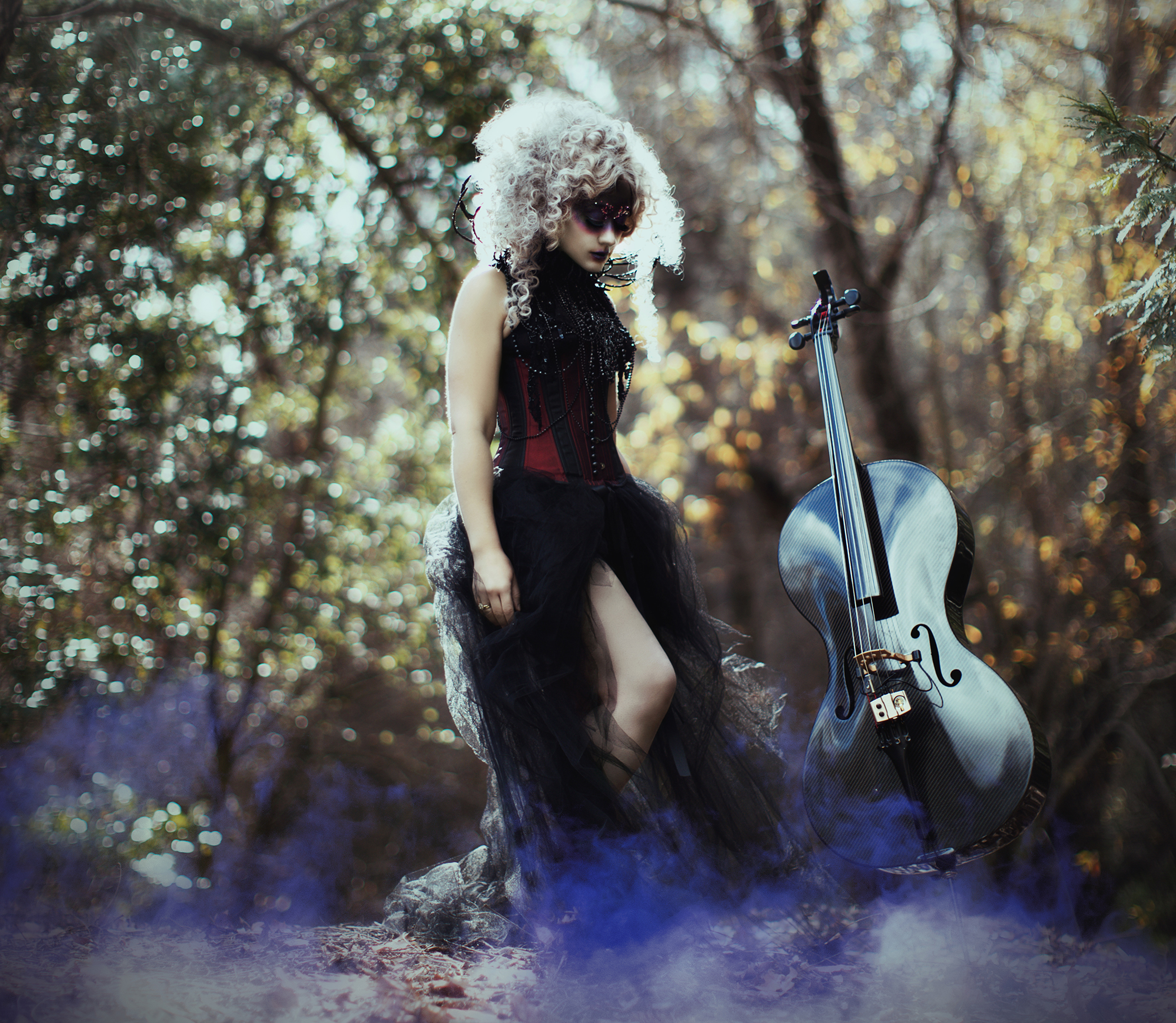 So, are you classically trained?
Yeah, my friend uses the term “recovering classical musician.” That’s me. I started the cello the summer before middle school and started getting private lessons soon after. I knew I wanted to do cello, so it’s almost like it chose me if I’m being honest. I went to music school in Colorado, at Denver, and then went on to get my master’s at San Francisco State.

How did you transition to noise music, or would you characterize your work as noise music? You’re not the typical sound you hear at NoiseFest.
[Laughs] No, I’m not. But in some ways I am, though, because there are quite a few compositional techniques that were germinated in newer [classical] music, and you’re going to find them in noise music for sure. I’m still a classical musician. I make my living playing the cello. I play weddings, pickup orchestras, chamber ensembles. I find that I have a lot of freedom within the noise scene to test out my own compositional ideas and really kind of roam freely.

You describe yourself as a dissident artist, yet you’re from this classical tradition. What do you see as the place of classical music in dissident art?
Tough question. Classical music is just so multifaceted. I don’t necessarily think in terms of what is and what isn’t “classical,” and whatnot. There’s the timelessness of classical music, which positions itself really well to examine different historical points. And since my work is pretty concerned with time traveling, I guess you could say—places changing over time—I think it’s a really good medium to explore different stories and different narratives.

Do any songs on the new album come to mind?
Yeah, that Messiaen piece [“You Can’t Go Home Again”]. It’s a rearrangement of Messiaen’s “Quartet for the End of Time” [for synthesizer, narrator and short wave radio], which is incredibly important to me. During his time at a Nazi prisoner of war camp in 1941, he took that work and placed it within a quartet that he put together in the prisoner of war camp. There’s this sort of beautiful timelessness to using music like that. There’s something really cool about the classical arts in that they make time travel possible just through listening.

As an immigrant to the South Bay, how do you handle the theme of gentrification? What do you feel like you’re trying to, or are able to address?
I’m trying to weave together a kind of tapestry of voices around me and really represent the community that I am lucky to have been embraced by to try to create platforms for voices to be heard. My collaborators are one part of that.

And the found sounds? One is about the Haymarket Riot, right?
Yeah! I found those samples on public and internet archives. They just felt so resonant at the time of the album’s composition. These voices … they still persist and they still need to be heard and it’s almost like they’re forgotten. I mean I did some alterations, for sure, but I put them there almost like a time record, a record of a past relevant to now.

But what do you feel is the place of the artist in gentrifying communities? One sample is a newscast about the Ghost Ship Fire [in Oakland]. What does that incident illuminate?
The Ghost Ship [Fire] points to many development issues like lack of affordable healthcare and a lack of safe spaces for artists to live, to create—but ultimately this goes beyond artists. This is about people. In the wake of the fire, a lot of things were illuminated, and there’s some needs in the community that are just not being addressed. It’s a complicated, upsetting, tragic, tragic thing.

So you’re saying you see common ground between the “starving artist” and, say, the family displaced by gentrification?
Yeah, of course. Artists provide sort of a barometer of how a community is doing. And so when you start losing artists, that’s probably a sign that the greater community at large is, you know, under siege or sick or that something’s going on. But I think artists do provide a sort of barometer for communities for sure. Yes, artists definitely lie at the intersection of politics and culture and so many other things.

So you’ve said that your “full” shows are a big part of your act. While you won’t be able to do it in Sacramento, can you give us an idea of what’s involved?
I love my full shows. Basically, I’m copying the artist Jean Cocteau and his ballet, Parade. It’s like interdisciplinary art: My album serves as the soundtrack and it’s essentially experimental theater. And so I have like a full-length film; it’s an original film I’ve worked with a filmmaker to create that is totally synced up with the music and then I have a couple of rotating dancers [who] are able to improvise, and then I’ll have a chamber ensemble. I call them my “stage poems,” and they make me so happy.

Are you listening to or reading anything that inspires you right now?
Hmm … The last book I touched on my bookshelf was Trauma and the Memory of Politics by Jenny Edkins. So pretentious—I also have an issue of Cosmo open. In terms of listening … there’s this artist I love right now, Javier Solís, and it’s a bunch of boleros on an album called Sugar, and I’m listening to that right now.

You can catch Cellista’s set at NorCal NoiseFest on Sunday, Oct. 6, 2019, at the Cafe Colonial (3520 Stockton Blvd.) at 9:20 p.m. For NoiseFest’s complete schedule, visit Norcalnoisefest.com. Three-day tickets are $50, and single-day run $15. All shows are all ages. For more on Cellista, visit Cellista.net.