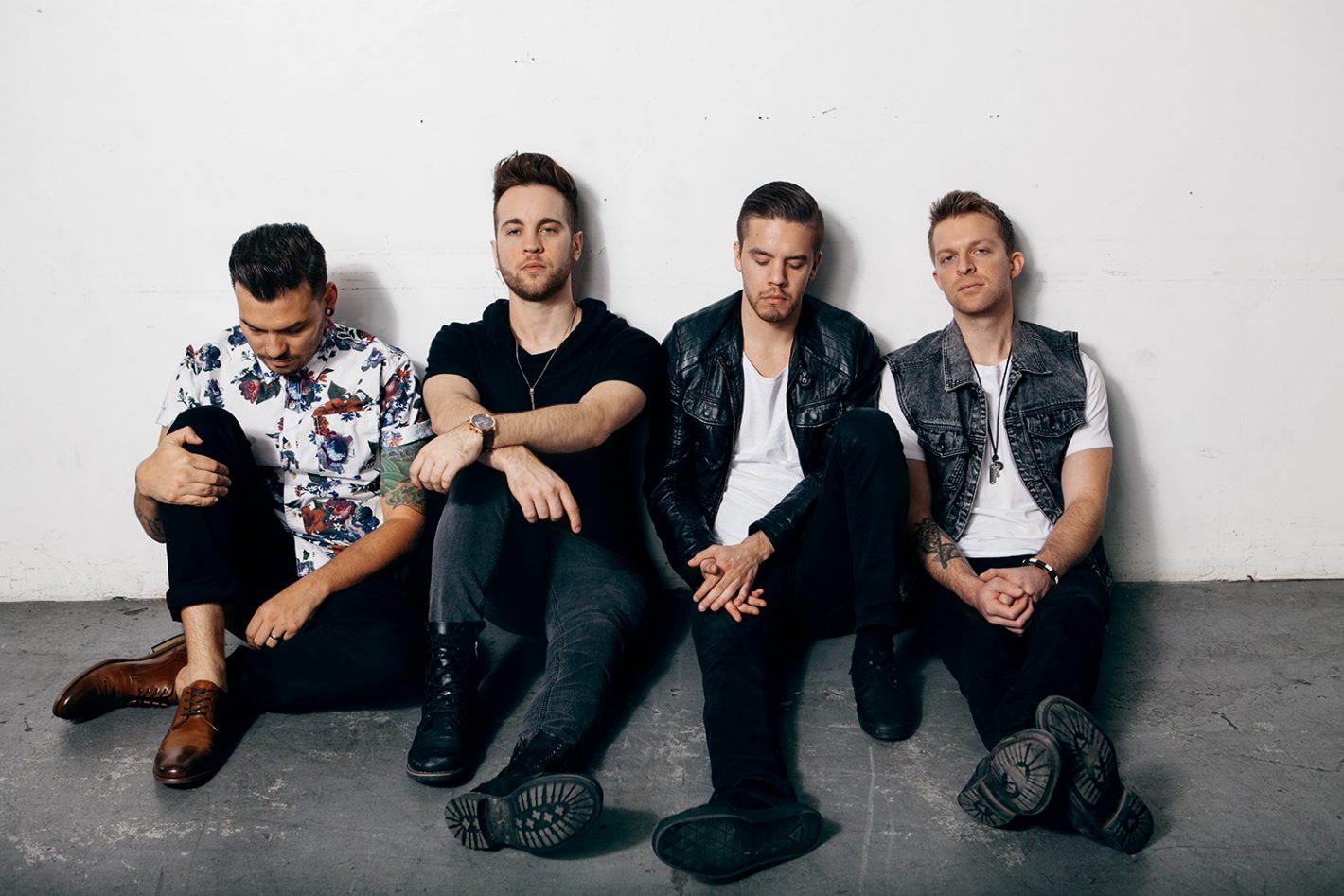 When I was a kid, back in the ‘80s and on into the ‘90s, the movies I saturated myself with tended to utilize the tried-and-true plot device of the odd couple. Whether I was watching The Adventures of Milo and Otis, E.T., Who Framed Roger Rabbit or The Fox and the Hound, the theme was always the same: opposites attract. This formula, while cliché at times, has a tendency to warm those heart cockles.

In the case of Sacramento-based project Cemetery Sun—who, according to the band’s bio, draw Influence from alternative rock, pop and R&B—key members Josh Doty, singer and songwriter, and Elliot Polokoff, guitarist and producer, fit the profile of an odd pair.

While both Doty and Polokoff have similar backgrounds as fans growing up in the local Sacramento music scene—despite Polokoff growing up in Walnut Creek—their paths to joining forces vastly differ. Whereas Doty experienced national recognition and success while still putting the finishing touches on his high school diploma, Polokoff was chipping away at a tech career, landing jobs at Google and Twitter in their marketing departments.

However, their mutual love of music and admiration for each other’s individual talent became the deciding factor in joining forces. At the time when Polokoff first became aware of Doty, he was spending his time working behind the scenes at a recording studio.

“I was producing a lot of bands working at The Panda Studios in Fremont, which is a pretty well-known studio,” recalls Polokoff. “I was looking for new bands to record and dabbling in my own material, and Josh’s name came across my radar … The short version [of how we met] I like to tell people is that I first recorded them and they had so much energy and we vibed together and I realized I wanted to join a band with Josh.”

According to his LinkedIn account, Polokoff boasts a B.A. in economics from U.C. Davis, was a Financial Advice intern for Merrill Lynch, and eventually found his way to marketing positions for Google and currently works as an Account Manager of Mid-Market Sales for Twitter.

“I differ from the other guys [in the band] in that I had a different background,” says Polokoff. “Not only was I really into music, but I was really passionate about technology. So, aside from being in a band with Josh and pursuing Cemetery Sun, I also work in the tech field and work with great companies like Google and Twitter, and that definitely helps big time with us, because we are able to use a lot of the marketing knowledge that I have learned working for companies like that, and actually use that for our band.”

Doty, on the other hand, assumed the role of the teenage superstar. Unfortunately, the moment the band Ten After Two experienced during Doty’s tenure didn’t last, despite seeming poised to break into that oh-so-lucrative screamo/emo/metalcore music genre the teens just couldn’t seem to get enough of at the time. Armed with the skinniest of jeans, hairstyles reminiscent of a Mötley Crüe/Flock of Seagulls lovechild and enough eyeliner to … well, you get the picture. Doty sees the experience as having been educational.

“I fell flat on my face is what happened,” laughs Doty, “I think that’s the best way to describe it. Ten After Two was a ‘buzz band.’ Don’t get me wrong, a very talented group of guys, and luckily some of them are still making music, and hopefully they’ll be coming up here shortly. But that experience of being in high school, playing ‘battle of the bands’ type things, and then all of a sudden our song is getting a lot of publicity on fucking Myspace—I can’t believe I’m saying that. People were looking at us on there and blowing us up. Artery Foundation in Sacramento got a hold of us, and we were finishing up an EP. We were selling out shows everywhere, which was pretty unexpected; they ended up pitching us to Rise Records. I thought that was the best thing ever at 17, 18 years old. I was like, ‘holy shit’ … It was a mad ego boost for kids who did not need it. And then Rise was completely different than I thought.

“I thought once you sign, you had made it, you know? That’s the lie I feel is sold to so many artists, especially being younger,” Doty continues. “Looking back on that now, I take a completely different approach. I like the mindset of doing it yourself a lot more, and if I hadn’t gone through Ten After Two, and gone through the struggles we went through and quitting the band like I did because we were financially unstable, we were kids. I just couldn’t handle it; I just wasn’t ready to handle it. So, if hadn’t had gone through all of that, then I wouldn’t be able to handle what we are going through right now.” 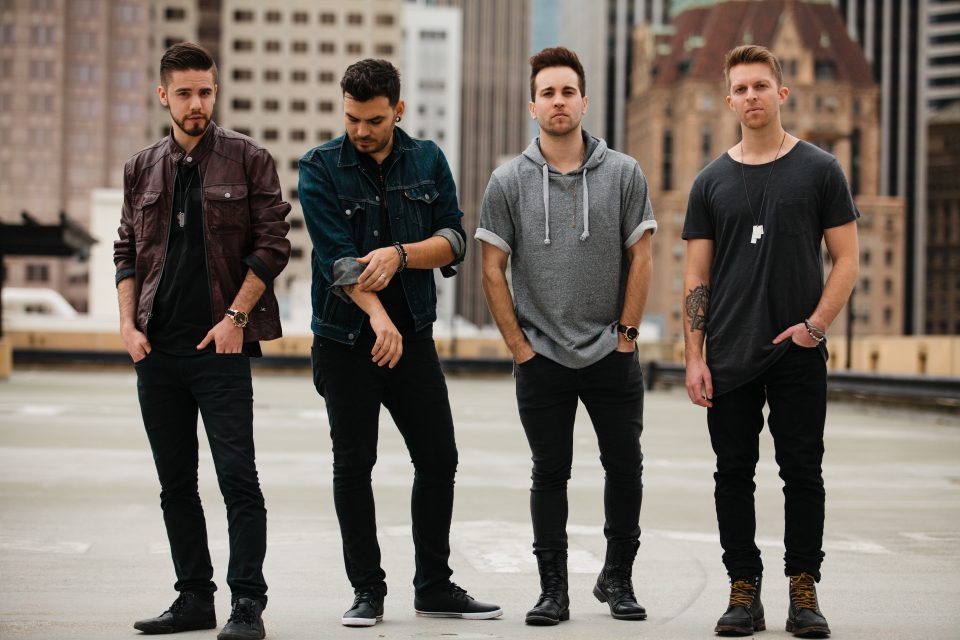 While Doty, as well as the other members of the band—Austen Butler (drums) and Jesse Mancillas (lead guitar)—each play key roles in Cemetery Sun, it’s hard not to recognize the X factor that is Elliot Polokoff. Whether it is his role as a producer, his contributions as a guitarist, or simply his expertise in marketing slipping through and helping the group reach a larger audience, he brings a lot to the project. Most of all, it is hard not to be impressed that he does that all while balancing a completely separate career in technology. Most of us would struggle to succeed in just one of those things.

“I think it takes a certain type of personality to do both, and it’s not for everyone,” Polokoff explains. “I say that pretty firmly, in that I’ll be doing work and doing assignments during the day, and then I’ll get a call from our management or I will get a call from our PR agency, and I will have to step out and take the call and it’s just about being able to separate your mind and switch to different things. But if you are as passionate about music and you’re as passionate about Cemetery Sun as I am, there is no reason that it won’t keep working the way it has.”

An East Bay resident growing up, Polokoff feels right at home amidst a group of locals, building a local scene while perfecting their sound and preparing to take the next step to reaching a much larger audience over the next few years. The reason for this may have something to do with where he spent much of his teenage years.

“I grew up in Walnut Creek, but believe it or not I have been a part of the Sacramento music scene for well over—man, this is going to make me sound old—between six and eight years,” Polokoff says. “When I was in high school, even in late middle school, I started going out to places like the Roseville Underground to check out bands like A Skylit Drive when they first started playing local shows, and Dance Gavin Dance … During that wave of the hard rock and screamo and emo scene in the mid-2000s, the Sacramento music scene just exploded. It was way better than anything we had up here (in Walnut Creek), it was better than San Francisco.”

Polokoff sees a rising tide on its way to town, and it seems he’s waxed his board and donned his wetsuit, ready to paddle out and ride when the time is right.

“The way I view it is, [Sacramento is] going through multiple ebbs and flows,” Polokoff explains. “I would say that right now is a period of really cool transition where people have been inundated with the metal sound … people are starting to look for something else. I think that’s why we, and a couple of other bands who like us, are a little bit different have been able to thrive in the last year, because we have been able to have luck with fans who are people that are ready for something new.”

If you’re ready for something new, check out Cemetery Sun at The Boardwalk in Orangevale on Sept. 5, 2015 for their EP release show. Also performing will be Once an Empire, If You Leave, Lost Things, A Foreign Affair and Altessa. Tickets are $10. Check out Theboardwalkpresents.com for more info. This is an all-ages show. 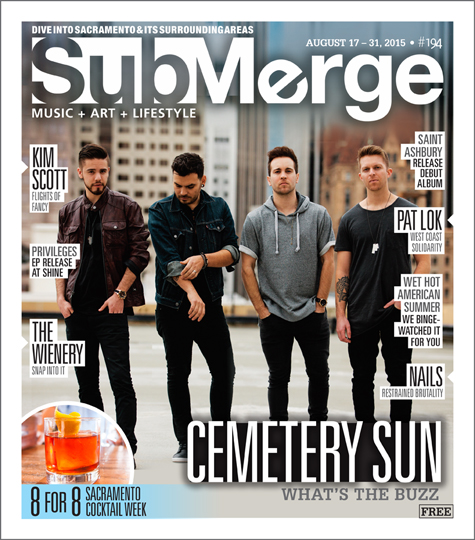