Sacramento’s Century Got Bars Concocts a Modern Throwback on Her New Release, 3

The freeway is a mess on the drive down Highway 99 to Elk Grove, where Century Got Bars is busy putting the last touches on her third solo album—the aptly titled, 3.

On the road, trucks tailgate cars, motorcycles weave in-and-out of traffic, while a woman eating a cheeseburger flips me off for going the speed limit in the slow lane. I’m trying to be patient. I’ll find my Zen and not beat the shit out of my steering wheel in a fit of suburban road rage as the traffic slows to a dead halt.

Since Century sent the majority of her album the night before, I flick on the stereo and have a listen. In an instant, my car is filled with bass, bombarded with “No Private Dancer,” a modern, speedy boogaloo that at once calms my nerves and makes me want to jump out of the car and do a backspin in the bed of the truck in front of me. Track after track, Century’s 3 offers a surprising, fun, unpredictable and eclectic mix of music, from soul to R&B to rock. The 32-year-old MC seems to have found a comfortable spot within the music industry, not by keeping to one genre, but by doing whatever the hell she wants.

Often, my critique of Sacramento rap is that it’s too timid—not that it’s quiet or that it has nothing to say, but that many MCs seem to adhere tightly to conventions, stuck within the confines of gangsta rap or ’90s-style boom-bap. Sacramento rap can be predictable and mind-numbing, if you listen to enough of it.

But somehow, Century’s 3 is none of those things. The album brims with honest, straight-up modern hip-hop songs with local legends—such as the track “RU Mad,” featuring Nome Nomadd and Mic Jordan—but the best part of 3 is the unmistakable ’90s vibe on tracks like “Last Laugh,” with Oakland artist Are Too belting out a hook that takes the listener right back to the days of Cross Colours and Hi-Tec boots while Century raps in a laid-back, introspective tone (like CeeLo, back when he was in Goodie Mob). There’s a lot to like on this album. There’s poetry, humor, earnestness—and best of all, there’s sprawling beauty and good, old-fashioned fun.

When I wind through a few suburban neighborhoods and pull up to Brian “AlienLogik” Baptista’s home studio, “The End,” a clean, energetic track featuring Mahtie Bush, Luke Tailor and maybe the best The Doors sample in the history of rap, bangs from the speakers. By the time Century’s verse, full of well-timed and wry observations (“Quit being bitter, nigga, pick up a book or pick up a Nook”) my face is plastered with a silly grin.

Usually when people say ‘90s, they think golden era/boom-bap, but your album is different—more SWV and TLC.
I’m thinking R&B. I’m thinking also boom-bap, but then I was listening to Rage Against the Machine. I was listening to Nirvana. I was listening to Portishead and all kinds of people. Neo-soul. D’Angelo. I remember in the ’90s, you could be at a family reunion and one moment you would hear DJ Jazzy Jeff and the Fresh Prince, but then the next moment you’re hearing Arrested Development and then the next moment you’re hearing Beastie Boys. Everything was eclectic. I’m a huge Alanis Morissette fan. I have Jagged Little Pill on rotation!

But that’s probably because you’re gay.
But you know what’s funny? I’m one of the real not-stereotypical gay people. I don’t hang in gay crowds and in gay clubs. I’ll go, but I like being around all people and I happen to be gay. I don’t really fall into all that. But having all that stuff played for me as a kid opened me up and it made me want to find out about other people. I just love everything different.

There’s no money in music. Why do you do it?
Because fortunately my mother raised me to have a day job. I work for Corporate America. One of the things my mother told me is, “Just know that if you ever quit your job, I will never listen to any more of your songs.” And I believed her. I have a 40 hour-a-week job to bitch about. I don’t ever have to bitch about music. I do this because I love it.

What if this album blows up? Would you quit your job?
I’ve been shelved. So I’ve gotten all the way to where they’re going to pick up your album to give you a recording contract and got shelved. So to me “big” would be getting someone to offer me distribution, even just in California. That would be a big look for me. If I could do that and not work, then great. Plus, I got student loans. Nobody has time for advances and all that crap from the labels when I owe my whole college education.

Did college teach you anything that you need to know now?
I think the environment of college did. I don’t know if the classes did. I hate to say that. Also, I went to school for audio engineering at The Art Institute of Atlanta. I got to learn a lot about what good quality sound sounds like. So when I found AlienLogik, he knows the fundamentals of what I learned in Atlanta. So I can mess with this dude and know he will not have me out here sounding like, “Did they [record] this in some shallow cave with a curtain over them?”

People contact you all the time asking for verses when they haven’t heard your music.
That happens a lot and I’m very nice to people when they do that. I don’t like it when people hit you up and are like, “Hey, you look dope. Can I get a track?” You didn’t even take one minute to Google my name. You didn’t even try to press play on the song and you’re asking me for a track?

Why do people do that?
Because people don’t want to work for anything. That’s all that it is. It’s sad because there are a lot of local rappers that have this mentality and that’s what you’ll hear on the song “The End.” We’re talking about people that have this mentality that everything should be handed to you. If someone comes to me and says, “Man, I’ve played Midtown Marauders or I played Forget Today, Remember Tomorrow, would it be OK if we [collaborated] on something?” I’m hella not rude.

How important is it to have female voices in hip-hop?
Uh, critical. I want to make sure I dispel this whole thing: I remember one time somebody said “She’ll slap me if I use the word ‘femcee’ when I talk about her.” But, look, it’s not that. Of course I’m proud to be a female and also be an MC. What’s happening is women are being conditioned to think that’s dope. I see tight females that are rappers that put “femcee” next to their thing. You’re putting yourself at a disadvantage because they’re putting you in a box. I don’t want to be a femcee. I want to be an MC that if you named your favorite rappers, period, I would come up. But females making their way through hip-hop is so important because the female’s life, the struggles that we incur … I mean, God, you guys have it easy. Do you know how many doctors’ appointments we have to go to?

Is it frustrating to spend a lot of time on an album and have not a lot of people download it or buy it?
It did when my head was in the wrong place. I was thinking more like, “Look at me!” like a lot of these people do. But I have this category. I have “Look at me!” and “Hardworking and fulfilled.” The “Look at me!” doesn’t do anything but give you five seconds of attention. And then when it goes away you’re mad because you don’t have the attention. Once I stopped caring about what everybody thought, that’s when everybody started listening.

How will this album be received?
They’ll like the fact that it’s so eclectic. There’s something for everybody on here. Everybody can feel involved. There’s not a lot of sexualized songs or a lot of straight up profanity or making one group feel bad about themselves. It’s just a happy album. Let’s get it moving. Let’s get it dancing.

Talk about Sacramento.
I want Sacramento to realize how good they have it. I’ve come here and I’ve never felt so welcomed. It’s hard to go back to your own home and everybody just knows you as the person they went to high school with. I don’t think anybody except my close family and best friends [in Detroit] have downloaded that album. And that’s hard. Because it shaped me. And I want to let them know that I’m always going to claim them even if they don’t claim me. But like the saying goes, “A prophet isn’t recognized in their own home.” But, guess what? In Sac they are! There’s a whole bunch of prophets that are recognized in their own home! And they don’t see how good they have it.

Do you feel the effects of sexism or homophobia here?
In Sac? No. God, I love Sac.

The release show for Century Got Bars’ 3 is at the Press Club Thursday, June 19. Doors open at 9 p.m.; Century’s set starts promptly at 10:30. Hosted by Andru Defeye and Miss Ashley w/D.J. Epik, Mic Jordan, Mahtie Bush, Luke Tailor and Petro. Tickets are free before 10:30, $5 after. Facebook.com/CenturyGotBARS for more info. 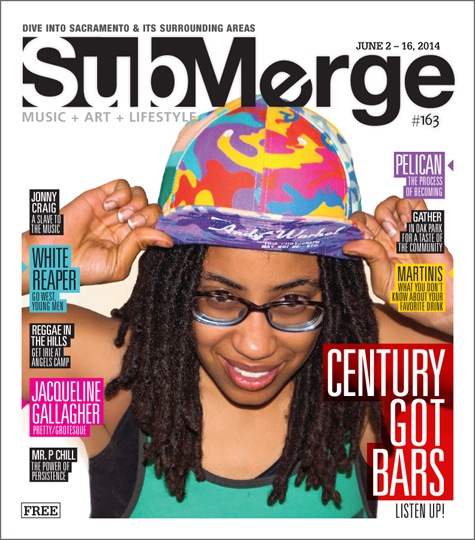