TAKE ME TO CHRCH

If 2015 was shaping up to be a big year for Sacramento psychedelic doom band Church, it’s turning out to be an even bigger year for Sacramento psychedelic doom band Chrch. The two bands are strikingly similar. They both have the same mononymous members—vocalist Eva, guitarist/vocalist Chris, drummer Matt, guitarist Shann and bassist Ben—and both play the same songs, with the same titles. In fact, the debut Church full-length released earlier this year on cassette by Transylvanian Tapes, Unanswered Hymns, is the same as the debut full-length Chrch record set to be released September 28, 2015, on vinyl by Battleground Records and celebrated by an album release show October 3, 2015, at Starlite Lounge. So what gives?

As it turns out, along with the parts of making a name for yourself in international music circles that rule—having labels put out your records, getting tons of rad press, getting to open for Pentagram, etc.—there are some downsides to having your band thrust into the broader musical zeitgeist. Namely, threats of litigation from bands who find your name a bit too close for comfort.

“It was a month or two ago,” remembers guitarist Chris. “I was asleep and Eva our singer came over, banging on the door. She got let in, came in and woke me up, like, ‘Dude, David from Battleground just called me, the lawyers from The Church just sent us a cease and desist!”

The Church is an Australian band who found limited international success in the ‘80s, but has mainly been relegated to cult status outside of Australia. This, however, didn’t stop The Church from threatening to apparently pursue legal action against Church if they continued to operate as a band under that name. So, Church became Chrch, and the forthcoming release of Unanswered Hymns on vinyl became something of a debut do-over.

Thankfully, the loss of a vowel, a website, and a couple of years worth of band-name recognition hasn’t put a stop to the band’s forward momentum. As Chrch prepares to release their album on vinyl and hit the road for some high-profile shows to close out the year—including the third installment of LA-based Midnight Collective’s annual Midnight Communion, Nov. 13, 2015 in Long Beach—2016 is looking to be an even bigger year for the band, under any name. 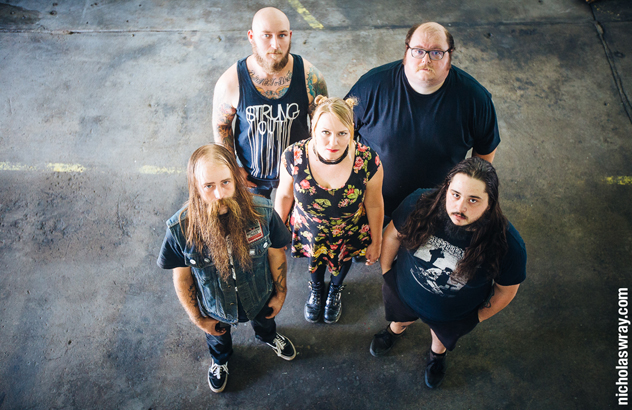 How did Chrch get started?
We’ve all known each other for years. I used to play in a band, in high school, that used to play shows with our other guitarist all the time. Our bassist was in a different circle of friends that I met through music; I went on tour with my friend’s band that he was also friends with and we were both on tour together. That was probably five years ago. Through him, I met the singer … We’ve all just been around in the scene for awhile. Sacramento’s pretty small; everyone sort of knows everyone.

Did you know, at the outset, what sound you were going for, or did you just sort of start playing and waited to see what would happen?
We all knew that we wanted to play in a heavy band, that we wanted to play doom, but we didn’t really know what direction it was going. There are so many different kinds of doom, so many different sounds in that one genre. Really, we just play what we want to play and it just kind of comes out all similar.

When did you start thinking that maybe this band was gonna be something special?
Kind of from the beginning. Our first show was with Bell Witch, which was just already crazy; we’ve all been fans of that band for awhile. From that point, we got really good shows right off the bat. Then we played with Dispirit right after that; a month later we played with Eyehategod. People started to see our names on flyers, like, “Who the fuck is this?” then checked us out, and we got a really good response, right from the start. Even this month, just as far as playing shows … I mean, we just opened for Pentagram, which is fucking crazy for all of us.

As far as the name, I’m sure it’s not that cool for you to be threatened with a lawsuit. But in a certain sense, it’s kind of badass, like “Whatever, we’ll just take out a letter and soldier on.”
I mean really, there’s a part of it that’s kind of flattering. This band from the ‘80s that is not even relevant any more, that I don’t think anybody gives a fuck about, feels threatened, or something by us. I don’t know why they would send us a cease and desist. They’re like a new-wave band. There’s no similarities at all. But they still think we’re encroaching on their business.

How has the response been to the record so far?
It’s been crazy. It’s been kind of overwhelming. We just kind of recorded it as a demo, but then labels picked it up.

Seems like the record has been getting really good press, like that review on the Roadburn festival website. Has that been just a matter of getting the record in the right hands?
Yeah it’s all been by chance basically. When we got the record deal, we got a press agent along with it, Cat from Southern Cross PR. So she’s helped a lot along the way. But a lot of it has just been somebody coming across our stuff online, on our Bandcamp or something, and liking it. That’s what happened with Roadburn. Walter, the curator of Roadburn, one of his friends, some guy in England reviewed it, and Walter saw the review and was like “Oh shit, I gotta check this out” and then liked it and put it on Roadburn. James from Transylvanian Tapes has been doing a lot too. We’ve been on Australian radio, which could have something to do with why The Church sent us a cease and desist. But he’s gotten us on a lot of blogs that we didn’t even know about. We find something new every day.

It has to be a good feeling, to get noticed worldwide.
Yeah, its cool. None of us had planned on doing this. We’ve gotten a couple of tour offers that we’ve had to turn down, because everything’s moved so fast. It’s definitely overwhelming, but it’s cool. Especially being from Sacramento, a city not necessarily known for its doom scene.

Celebrate the release of Chrch’s Unanswered Hymns on vinyl on Saturday, Oct. 3, 2015, at the Starlite Lounge with Acid King and Cura Cochino, as well as interludes provided by Noctooa. Show starts at 8 p.m. and is 21-and-over. For tickets, go to Atlanteancollective.queueapp.com. 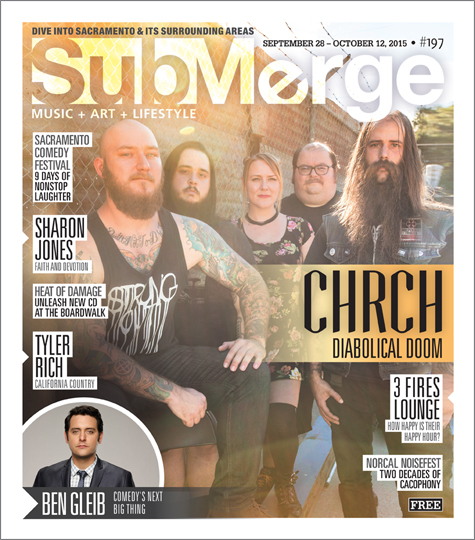