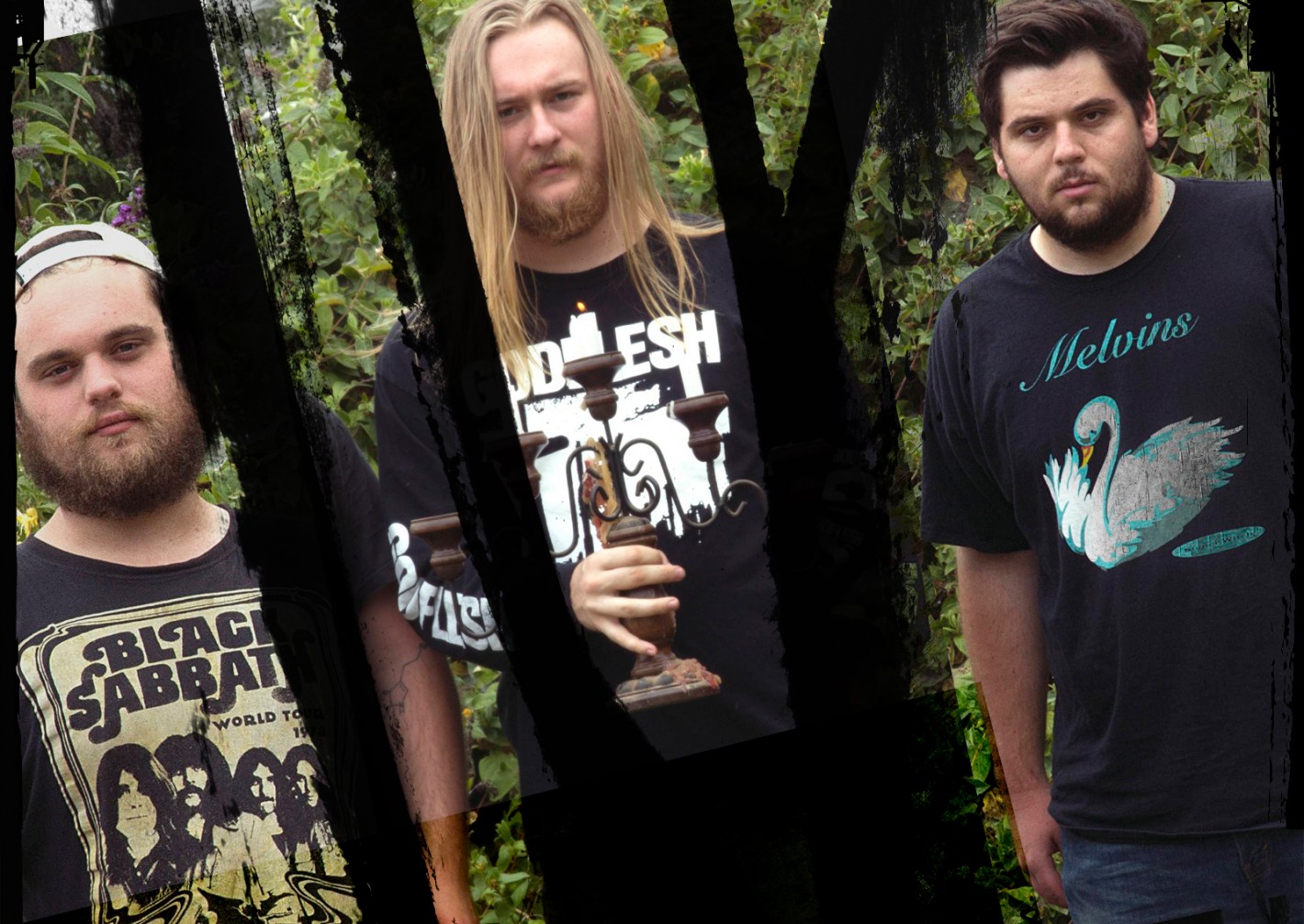 The heretic’s fork was a medieval torture device. It looked like a double-ended barbecue fork with a leather strap around the center. The points were placed under a person’s chin and against their sternum, with the strap fastened tightly around the victim’s neck. It forced confessions from people who would not have otherwise confessed. The grim, simple image of a heretic’s fork adorns the cover of Roseville band Chrome Ghost’s first album, Choir of the Low Spirits.

“They would hang you upside down by your feet, and you couldn’t move your head. If you moved your head, it would pierce your flesh in either direction,” explains Jake Kilgore, guitarist for Chrome Ghost.

“It’s super iconic when you turn it into just a solid color, and it’s menacing, but you don’t really know what it is. As cool as upside-down crosses are, that’s not really what we’re going for. A weird torture device laid over pink flowers is much more our speed,” he elaborates.

Chrome Ghost is a three-piece, rounded out with Cole Thompson on bass and Jacob Hurst on drums.

The eight-song tape will sit comfortably on your coffee table, alongside your bong and the liner notes to that Baroness album on your turntable. Or in your digital music library, perhaps on a playlist you set aside for driving or going to the gym/420. Some of the tags used to describe the album on its Bandcamp page include “sludge” and “pop.”

The band is from Roseville. They all live there. They don’t live in the same house or anything, but they all live there, and they grew up there. I didn’t bother asking them when they plan on moving downtown, even though I thought that. I hate that I think that.

Thompson, Hurst and Kilgore have been playing together as Chrome Ghost for about a year. They wrote a rockin’ record, and they really just want to get in the van and go. You should give the record a listen on their Bandcamp, or purchase the cassette from them at their show on July 15, 2016. It’s at Starlite Lounge.

When did you guys start?
Jake Kilgore: I started the band almost a year ago with Jacob. I was living in L.A., and I moved back up here and hooked up with Jacob. I had a bunch of songs written, and we’ve been rearranging and reworking those songs.
Cole Thompson: I’ve been playing bass for about a month.
JK: The majority of the stuff was written in pieces at my terrible apartment in L.A. My original plan was to make all the drums digitally, like on Ableton or something, and just make the album that way. It would have been so stupid. Jacob was in this hardcore band in Roseville called Dive, but they broke up and now we‘re playing.

What do you guys want to do with this band?
Jacob Hurst: We were just talking about this …
[All at once]: To be signed to Southern Lord [laughter].
CT: I just want to be in a successful touring band, making enough to live on.
JK: I just want to get a fucking van, and go on a small tour and not lose any money. As long as I can pay rent. I have a fiancée, and she doesn’t deserve to be broke as fuck just because I have dreams.
JH: Yeah!
CT: That’s the dream.

You use some interesting tags on your Bandcamp page to identify your band. What would you describe your music as to someone who isn’t familiar with sludge or doom metal?
JK: The short version that we have agreed on is Black Sabbath Beach Boys. I think the closest we could be compared to is like, Torche?
JH: I think the Melvins are a good comparison, depending on the time period. Yeah, we get Alice in Chains a lot [as a comparison].
JK: Yeah I made these acoustic demos, and I got the Alice in Chains comparison, I guess mainly because of my vocals. I learned to sing for this band. I learned to sing because of Cole, he has a really good voice. But yeah, if I had to describe, it’s just like sludgy, heavy rock. I don’t even know if it’s metal, because it’s not, so you know, abrasive.
CT: Super-pretty vocals to heavy-ass music.
JK: Actually my initial inspiration for the album was to combine the feel of Odyssey and Oracle by The Zombies with Sleep’s Holy Mountain. Something that’s like, super heavy, riff heavy, big drums and big bass, with light, airy vocals … There are no songs about drugs, there’s no songs about women, no songs about cars. Basically it’s singing about hating yourself or the devil.
JH: It sounds so shitty when you say it out loud.

How did you guys choose Pat Hills to record with?
JH: I had a friend in a band called Tightrope, and they recorded with him, and I loved it. So I hit him up and he’s so easy to work with.
JK: Patrick Hills is the fucking man, he’s so cool. The second day that I moved back, I went and saw Big Business at Harlow’s. They are one of my favorite bands, HUGE inspiration … and the opening band was Chrch, and the liner notes said, “Recorded by Pat Hills,” so I kept that in mind. The original plan was to record everything at my house.
JH: We recorded the guitar, bass and vocals at home.
JK: We initially hit up Patrick, and he recorded the drums. And we were going to do everything else. When I looked at everything, I had like 70 tracks, and I was just like, “I am not capable of doing this!”

Chrome Ghost is playing the Earth Tone Studio’s one-year anniversary party at Starlite Lounge on July 15, 2016. Also performing will be Swamp Witch and others. This is a free show (but only if you’re 21-and-over). Fans of all ages can get their doom-y hands on a copy of Chrome Ghost’s Choir of the Low Spirits at Chromesludge.bandcamp.com.