Cold War Kids were Louder Than Ever 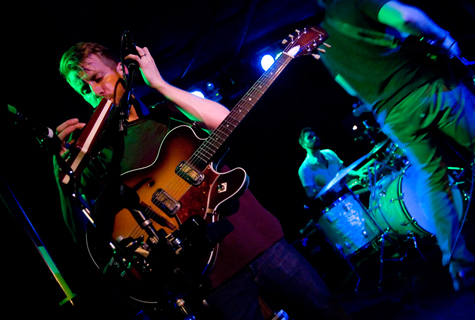 Before Cold War Kids took the stage in front of the tightly packed crowd at Harlow’s, audience member Valerie Valdez scanned the set list to see what the band had in store for her Thursday night. As soon as she realized her favorite songs weren’t there, she did what any fan would do and made her song request on a used napkin. It said in scribbles, “Hi guys, ‘We Used to Vacation’ [and] ‘St. John,’ Pleez” and placed it right by their set list, so the band would take notice.

After an opening set from We Barbarians, Cold War Kids took the stage with a roar from the audience and immediately went into their new songs, “Royal Blue” and “Finally Begin.” When they started to play a familiar tune, “Mexican Dogs,” the audience couldn’t help but rock their heads to the beat and join the band in singing the vocals.

The audience seemed to be pleasantly surprised that their set mostly centered around their upcoming third album, Mine is Yours, including new tracks, “Louder Than Ever,” “Audience,” “Bulldozer” and “Upside Down,” which resemble the same raw sounds as their 2006 album, Robbers & Cowards. But as soon as the audience recognized “Hang Up to Dry,” there was not a mouth in sight that wasn’t echoing the lyrics right back at the musicians.

The indie rock group was completely focused on their music as each member lost himself while performing. Frontman Nathan Willett not only sang with his bluesy voice but banged away on an old brown piano. At one point, drummer Matt Aveiro was drumming with a drumstick, a maraca and a shaker with beads. Bassist Matt Maust seemed to be in a trance while he used the entire stage, almost colliding into band mate Jonnie Russell. Throughout the set the two members often played their instruments face to face within inches of each other, as if they were the only two people in the entire venue.

Even though the crowd seemed to be unfamiliar with the new tunes, bassist Matt Maust said he likes to stick to playing the new songs.

“It’s who we are right now,” explained Maust after the show, with his arms crossed. Maust admitted that before the show he decided to do a little antique shopping around town. The bass player said he feels a little dislocated in the city of Sacramento because he gets more of a “folksy” vibe from local residents as if he were somewhere in the Midwest. But as for the bittersweet transition from old songs to new ones, “It’s like breaking up with an old girlfriend.”

Who knows if they saw what was scribbled on the dirty napkin next to their set list, but the indie rockers decided to end their set with another crowd favorite, “We Used to Vacation.” During the song, guitarist and vocalist Russell used a maraca to bang on a cymbal that rested on a speaker case while tapping his foot on a tambourine. A lot of bands seem have trouble breaking out from the comfortable territory of their old songs, but Cold War Kids unleashed their new songs with ease. 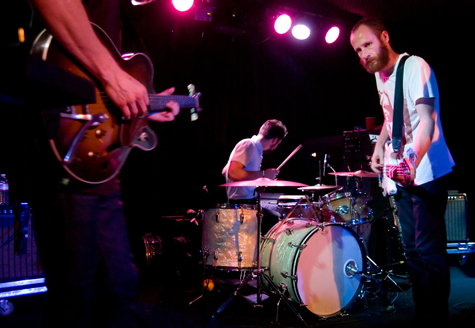