Everything Evolves • Converge Continues to Carve Out a Legacy with Humility 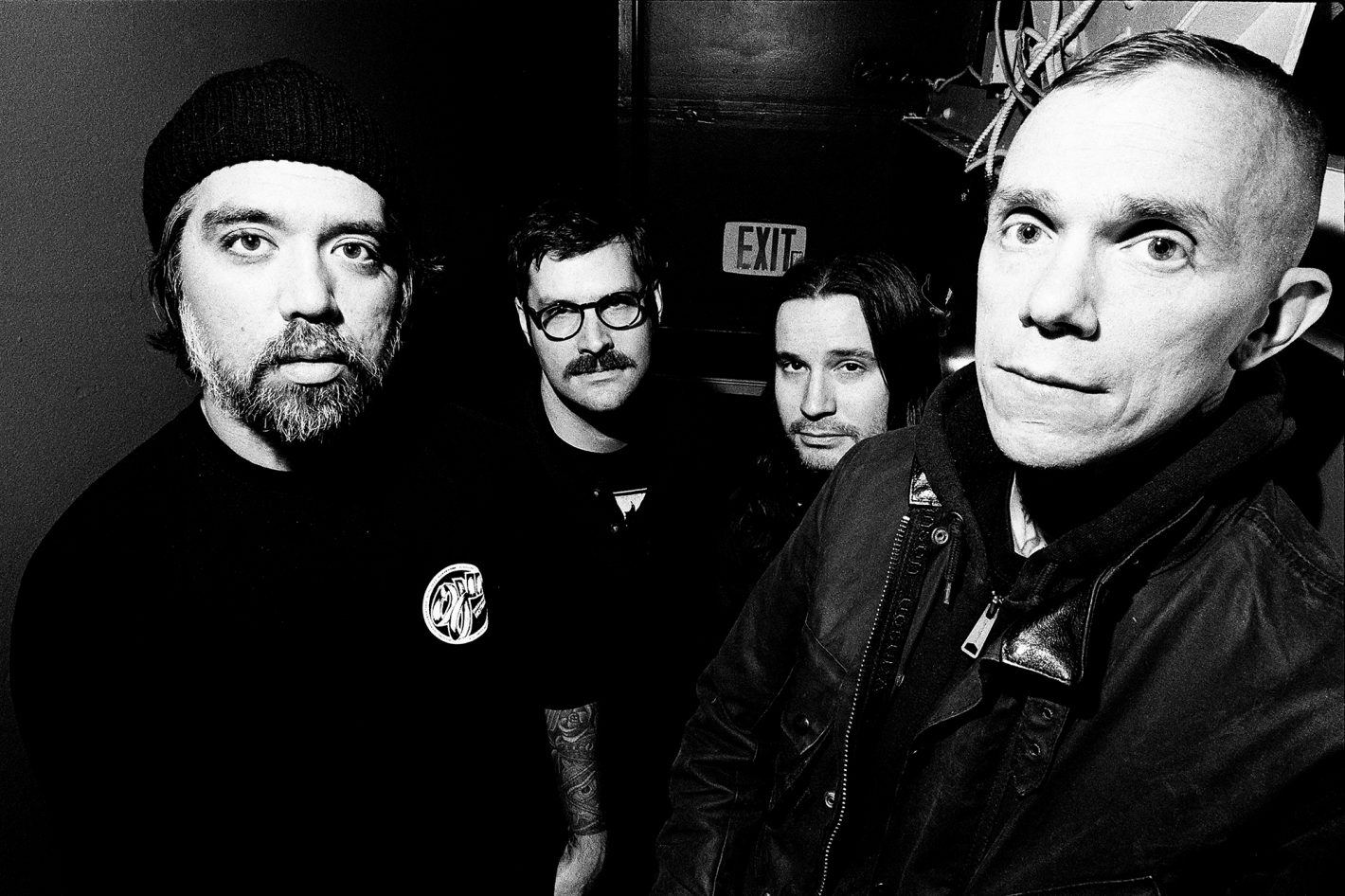 Followers of punk rock, hardcore and heavy metal are likely already familiar with Converge. To many, they’ve been a household name for a long time, having been veterans of the music scene for nearly 30 years. Boston legends Jacob Bannon (vocals) and Kurt Ballou (guitar) released their debut album, Halo in a Haystack in 1994, laying an early foundation of dark, aggressive music that has spanned decades.

As the group continued writing and touring into the late ‘90s, Converge released the compilation Petitioning the Empty Sky, consisting of an EP and live radio broadcast tracks, plus their third studio record When Forever Comes Crashing within the span of a couple of years. Some longtime fans consider these albums to be classic and highly influential for their time.

As their raw sound matured and solidified from their early days, Converge co-founder, Bannon states that, “putting in undying effort and having a sibling-like relationship with bandmates has helped us get to where we are now. Nothing was handed to us. We have worked hard for everything we have.” This hard work led to Ballou opening GodCity Studio in 1998, and Bannon and friend Tre McCarthy establishing record label Deathwish Inc. to expand on their dreams and keep operations in house.

In 2001, the group released perhaps their most influential record to date, Jane Doe, of which Bannon says, “It wasn’t received with all positive reviews by critics when it was released.”

After Jane Doe, they found their home with Epitaph Records and continued their onslaught of touring and album releases with You Fail Me (2004), No Heroes (2006), Axe to Fall (2009) and All We Love We Leave Behind (2012). Converge’s most recent effort, 2017’s The Dusk in Us, is packed with heavy-hitting riffs and furious vocals as portrayed on “Under Duress,” but also touches upon dark melodies with more instrumental space shown on the title track and “Reptilian.”

In the following interview, Bannon reflects on his early days in the band and the beginning of his label Deathwish Inc., providing both humble and realistic views of how the music industry operates. As for what has fueled Converge’s fire for nearly 30 years, Bannon says, “I don’t understand giving up on things you care about. We have the same creative mindset as when we were kids in high school and college who found values as individuals and purpose in life. We’re thankful that we’ve been lucky enough to have this opportunity.”

How do you prepare for tour in creating your set lists from night to night?
Sets are typically dictated by the amount of gear we can travel with. We try to be as self-sufficient as possible with a skeleton crew while working regular jobs. There’s more freedom for us in the U.S. because we have our own stuff, but on a European tour most shows are fly-ins and every guitar checked in costs money … You don’t typically want to put your faith in airlines handling your gear, which could get damaged or lost. We’ll try to come up with three- to five-song blocks while rehearsing to limit tuning time and breaks. In 2014 we had the luxury of our first bus tour with At the Gates. Prior to that, we did U.S. tours mostly in our van, which unfortunately just blew up. So when we start the West Coast leg of this tour, we’ll freight our equipment and share or borrow gear.

Did you have any sort of business background when starting Deathwish, Inc.?
I put out our first 7-inch record in 1991 and was a punk rock kid that went to art school from 1994 to 1998. By 2000, I was doing a lot of design work, branding and visual identity for other bands and labels, seeing things through all the way to manufacturing and production. So it made sense to jump in and give it a shot.

You seem wise to the logistics of backend operations in the music industry. How much of that comes from raw experience vs. owning and operating Deathwish Inc.?
We make art and music because we love it and have worked hard to get it to people. Promoting art and music is my day job. We were somewhat of an anomaly when Deathwish started in 2000; the goal was to make a label that could represent us in a variety of ways. Some record labels abide by a more archaic model by just releasing an album and promoting on a 90-day cycle then move on to the next thing. We see a bigger picture and want to provide greater services for the lifetime of a band as long as they’re active and maintaining a busy schedule. You can’t rely on others to do your job for you. The most successful artists are intelligent people who understand basic business, commerce, and can be self-sustaining.

Then why was there a need to sign with Epitaph Records?
In our case, we work with outside labels like Epitaph because they’re great and do wonderful business with us. They handle CD and digital aspects as well as promotion and marketing for us. Deathwish manufactures the vinyl and also heads the marketing and visibility of the band, so it’s kind of a two-prong approach to getting things done. But I like to control the vision, because no one knows what we’re trying to convey more than ourselves. We record, produce, engineer and manufacture our albums.

Do you think you’d be where you are now if it weren’t for Jane Doe?
Jane Doe is historically important now, but I don’t see it as legendary or groundbreaking. We got thrown under the bus a lot and the press despised what we were doing, so my perspective is a bit different than the folklore surrounding the album. I still have a 200-plus page book of press and write-ups given to me from the press company that helped Equal Vision Records. Metallic hardcore in the style we played and performed wasn’t really a thing that was experienced by the larger metal world at that time. Pure metal bands were of the majority and groups like Lamb of God and Shadows Fall didn’t exist yet. We’re thankful that people have stuck with our band and “sub-genre“
over time.

What do you think has changed in the hardcore/punk scene since your start?
Everything changes, because everything evolves. When physical media like CDs came to be widespread in the late 1980s, bands didn’t take to that for nearly a decade due to high production and retail costs. As time went on, CDs became more affordable and used stores were popping up making them more accessible. For a long time vinyl became a secondary thing when digital media became a reality. Digital media and file sharing changed the game with how you could promote and hold ownership of recordings. There’s still no perfect solution for that from an artist’s perspective. If you told me five years ago that streaming platforms would be a predominant form of digital music, I wouldn’t have believed it, because you would have to kill piracy. But labels are now slowly finding ways to limit piracy.

How damaging is piracy for music artists?
Major labels and large popular culture artists don’t feel the effect quite like we do. In punk rock it’s particularly damaging because we don’t have the sales numbers and audience for it not to matter. A bigger punk or hardcore band may sell 10,000 or 20,000 physical copies of a record, but if that same album is downloaded 100,000 times before it’s released it can completely cripple a band.

When I was younger, I’d do a lot of tape trading but would also spend all of the money I’d saved up on records and CDs, so I can see things both ways. To take in music, I prefer to sit down with a record and lyric sheet. But I’m careful not to knock the way other people choose to experience music, because it’s all valid and relevant. Plus, it’s tougher in this day in age for people to become immersed in a full-length album with all of the distractions.

Is it exponentially easier to operate as a band having GodCity Studio and Deathwish Inc.?
Sure. But that was a conscious decision and things we worked very hard at obtaining, building and maintaining for almost 30 years. They weren’t gifted to us. I’ve talked to people about it before who say, “Things are easy for you because you can practice in the live room in the studio.” Yes, but we pay rent and mortgages on our investments. We continue to re-invest money we’ve made over and over again, because it’s our calling and the way we’ve chosen to live our lives.

Your tour begins on June 13 with a home show in Boston celebrating the life and art of Caleb Scofield [bassist/vocalist for Cave In and Old Man Gloom who lost his life in a car accident earlier this year]. What did he mean to the local scene and how might that show set the tone for the rest of the tour?
It’s been a difficult few months for a lot of people in our circle. All of the Merrimack Valley bands came up together playing local then regional shows together for years. Bands like Cave In, Overcast, Killswitch Engage, Shadows Fall, Piebald, Bane, countless others all learned from each other. I have a lot of vivid memories of Caleb from our 2004 U.S. tour with Cave In. Nate Newton [Converge’s current bass player] played with Caleb in Old Man Gloom and to see him be so affected by losing one of his good friends is very tough. Many are carrying the weight of this loss, so we’re all trying to do positive things for his family and the community.

The West Coast portion of your tour is co-headlining with Neurosis. How did that relationship come to be and what sustains it?
I was a fan of their music since I was a teenager. Souls at Zero was a game changer in terms of what could be done with heavy music. They asked us to do a few shows with them in Seattle in the early 2000s and we obliged. We are kindred spirits with them and have a mutual respect and admiration for what each other does.

Are you satisfied with new record The Dusk in Us?
I really enjoy the record. I’ll only typically listen to our records in preparation of practice, but we executed what we wanted to capture. You’ll never be 100 percent satisfied, even if it’s just the order of the track list. We just try to make music that moves us and it’s up to other people whether they connect with it or not.

Check out Converge live when they play Holy Diver (1517 21st St., Sacramento) on Monday, July 9. Also performing will be Neurot Recordings artists Amenra. Tickets can be purchased in advance for $22.50 through Holydiversac.com. Doors open at 7 p.m.