It’s two weeks before Scott Ferreter’s band Cove drops its first EP (mostly self-recorded in Ferreter’s mom’s basement), and before the trio goes on its first tour in the freshly purchased “Cove Mobile.” He doesn’t explicitly state it, but Ferreter sounds like he’s floating on nirvana right now.

The 24-year-old Sacramento native patiently waited for these pieces to come together since he left his last band, Comfort Twin, in Santa Cruz more than a year ago.

“It was a zoo to begin with, an eight-piece band and half lived in the Bay Area and the other half in Santa Cruz,” he recalls. “It was a really fun band. Eight pieces is a real pain in the ass for getting together, but once you got it together, in every sense of the word, it was great.”

Ferreter moved back to Sacramento when his dad was diagnosed with cancer, and shortly thereafter Comfort Twin dissolved. The move became an opportunity to create the band he always wanted.

“Once I moved back I was really excited to start a more straightforward band,” he says. Through advertising and hanging fliers at Javalounge downtown, Ferreter met drummer Steven Cranston and 27-year-old bassist Charlie Dale.

The three fine-tuned their sound and lyrics, and had the EP and tour upcoming when Cranston left the band after getting a job. Ferreter became frantic to find a drummer last-minute.

“Our musical existence was weighing heavily on finding a drummer. I was worried we would have to settle so it was humorous when Omar pulled up and he was exactly what we wanted,” Ferreter says. “Charlie and I pontificated on finding a drummer, saying we should get someone who is good at even asking for money at the end of the night. The two of us, we’re not tough guys, so when Omar said the other day, ‘two things I really like is dealing with sound guys and dealing with club owners,’ it was meant to be.”

Omar Barajas, 23, also from Sacramento, joined Cove after stints in other local bands.

“The other bands I played in were completely different,” he says, on break from his day job. “The first was instrumental, then I toured with Sister Crayon and that’s electronically driven with heavy beats. But Cove is really mellow.”

It was a welcome change. Barajas, whose major influences are jazz and bands like Silversun Pickups, wanted a slower pace.

“I was used to just banging my drums, but now I’m focusing more on my technical skills,” he says.

He joined right after Cove recorded its EP. The new trio had their first show in mid-October and Barajas says he’s been able to see the backbone of the songs and insert his own style.

“Scott is a good songwriter, so it’s easy to get lost in the music.”

Ferreter says most of the seven songs on this EP came about from jamming together.

“When I got to Sacramento I had all these songs that I wanted to put on an album. As we started playing together, it was immediate, we saw this energy together that we couldn’t create on our own,” he says. “Cove is my first experience of actual co-writing. These sounds would not have happened had these exact people not been together at that time. Everyone has differing interests and musical paths but there is enough overlap in the stuff that matters: how to approach music, the process of playing together.”

And then there is a good amount of absolute happenstance, Ferreter says.

“I’m a Craigslist junkie, mostly in the name of getting a band together, so if a show needs to happen, I’ve got the stuff for that. I found this $30 electric piano and like a week later, we met Charlie and piano was his first instrument,” Ferreter says. “The last band he was in, he was playing drums but he was really excited about playing piano, and it became instrumental to us as a band.”

On their self-released album, Dale plays electric piano, synthesizer and bass. A few songs also have horns with help from one of Ferreter’s former bandmates, and extra vocals with help from David Lipp, who recorded half the record and, according to Ferreter, “took the project from an absolute zygote to a complete creature ready for the world.

“David (Spare Room Studios, San Francisco) did all of the engineering and I just cannot say enough about it,” he says. “He did it out of the love for the music. He took a handful of sand and turned it into a nice tropical beach. I’ve come to a loss of words, I can’t say enough.”

Some sounds from the album will obviously not be part of the tour, such as Lipp’s vocals, the horns and a full-sized harp that Dale received as a birthday rental.

“Of course in the middle of recording this album, we have a harp so it’s a no-brainer,” Ferreter laughs.

The album doesn’t have a theme per se, but the band thinks of it as more a process of selection.

“These are the songs over the last year we’ve felt a lot of energy from. We were thinking of timing, of this era of our lives. We have some songs that are some of our favorites, but we didn’t end up including them because certain songs feel like they ripen and will start rotting soon thereafter. We play what’s feeling ripe right now, what’s relevant right now. It was also about what tools we have. We have some grandiose ideas for other songs but don’t have what we would need to record them yet.”

For now, the band says, the EP and the tour is the direction they’re moving musically. It’s not a hint of what they’re doing—seven songs could be considered an album—it’s a full piece of pie. 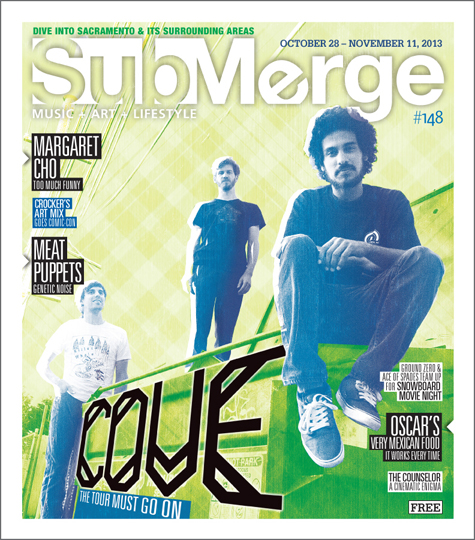 The tour and EP release party start at Luigi’s Fun Garden Nov. 7, 2013 with tickets on a sliding scale from $5 to $10. The orbit of the tour will be around Seattle, Olympia and Portland and will last two weeks. Check out Covetheband.com for more information and to sample two recordings.