Raw and unfettered, Crude Studs gets it all out

Sometimes, a story is just simple.

As far as Crude Studs are concerned, the four-piece punk band formed organically, inspired by a local music scene that thrives on a do-it-yourself mentality. They gravitate more toward basement or house shows that provide a subcultural safe haven stitched together by one common thread: music as therapy.

“I thought he was a creep when I first met him,” laughs Flores, as she recalls how Crude Studs first came together. “I thought here’s this guy with, ‘Hey, wanna be in my band?’ He and JB were an automatic, really comfortable fit for me and still are. We all get along really easily and have fun. It’s like family. We’ve only got mad at each other like once and it was, surprise-surprise, 110-degree weather in the attic we practice in.”

The three started collaborating in early 2012 and by summer, Nich Lujan joined in on bass guitar and the band became Crude Studs. The group’s first performance was at Casa de Chaos, a volunteer-run word-of-mouth venue located in the Midtown area, and a place where all four members feel at home.

“I’ve always wanted to be in a band with a female vocalist. Most of the bands I like have female singers, like I have a Siouxsie Sioux tattoo,” says Khan as he points to his forearm. “I just thought it would be cool to have a different outlet. We weren’t necessarily looking for that, but I’m glad that it happened.”

“It’s not macho. You don’t have to have specifically really good equipment to play it,” describes Khan. “You get together and write this raw music. It’s very quick. A lot of the early songs I was writing were basically about being broke, on drugs and an alcoholic. Honestly, that’s what it was about. But, she got in the band and started writing things from her perspective.”

Flores says her lyrics directly reflect her experiences in the workforce. Whether it was a heavy hand in construction, cleaning dirty houses or even the air-conditioned environment of an office, many of these situations inspired the words captured in the song, “Padded Walls,” featured on their self-titled 7-inch.

“It’s about feeling trapped inside of an office with florescent lights and feeling like you’re going to die there. A lot of my anxieties personally revolve around work and the value of labor and how it’s highly undervalued in our society,” says Flores. “In that song, I feel like I’m a caged animal inside of that type of office building and also, I feel like a traitor to my roots as a cleaning lady as a Mexican woman, [and] knowing there’s still plenty of people out there doing really hard jobs that don’t get paid nearly as much as somebody who just sits around and does lunch all fucking day.” 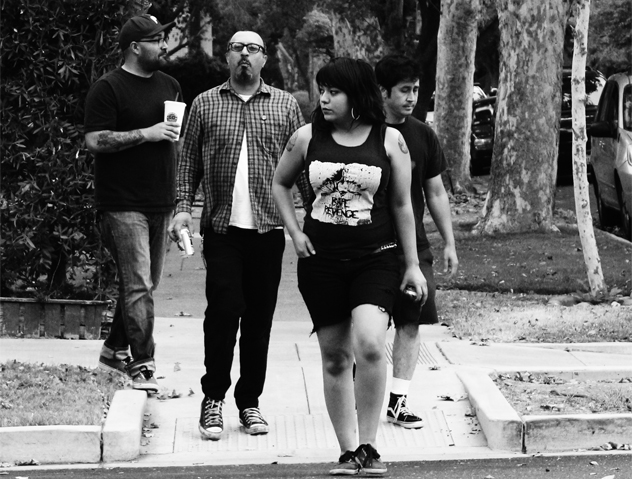 Crude Studs also draw influence from a variety of musicians that includes everyone from anarcho-punk Nick Blinko of Rudimentary Peni to Queen’s Freddie Mercury. The band also lists groups like Zero Boys, Thin Lizzy and Judas Priest as favorites, and even what Flores calls the more embarrassing, childhood memories of Sammy Hagar, which she credits to her mother.

“Nick Blinko is probably the biggest punk singer that really made me want to even help a band come out with that kind of catharsis and that kind of additional sound,” she says. “I don’t really think of it as being a front person. I think of it as another instrument that plays off of what everybody else is doing sound-wise. A lot of times the words don’t come through anyway in this type of music. So, I think it’s more important to have a distinctive style and cadence.”

Flores admittedly uses her time in Crude Studs to “exorcize some demons” and to express herself through song. She takes full advantage of her space, filling the room at live performances with her boisterous stage personality and bending and manipulating her vocals to fit the loud and sludgy moments provided by Khan, Thomas and Lujan.

“I use it as cheap therapy. It’s really rare as adults that we get to scream our heads off whenever we want to, especially in public spaces and especially as a woman.You’re expected to be quiet or you’re crazy. That’s kind of the only options that you have if you do express yourself in a forceful way,” says Flores.

Crude Studs openly credit longtime bands in the Sacramento punk community like RAD and Rat Damage with helping them first gain access to shows. In a scene predominantly male-fronted, Flores says she truly enjoys when young women approach her after shows and express interest in Crude Studs’ music.

“It’s really cool to talk to young women, especially after playing and being able to tell them that I’m not doing anything special. You need to go start a band. Right now, go home, start writing stuff, get your friends together and just do it.”

I love punk rock, but I look at it as a style of doing things and like a D.I.Y-culture,” he says. “If punk is all those macho bands with the right tattoos, I have nothing in common with that. I don’t even know what that is. If that’s punk, then I don’t care about punk. But as far as the mentality of doing things yourself, that’s what I love about punk.”