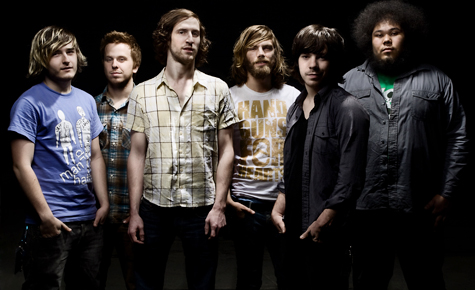 No More Drama in the DGD

Dance Gavin Dance’s mélange of screamo and R&B has earned the group quite a following both here in their hometown of Sacramento and beyond. Though its members’ mean age is around 20, the group has already traversed the country six or seven times, most recently in support of Poison the Well. With just a few California dates to come (including Bamboozle Left in Irvine and four dates as part of the Artery Foundation tour that will bring Dance Gavin Dance to the Boardwalk on Apr. 19), the band is now ready to re-enter the studio with a new singer, Kurt Travis, in tow. Submerge sat down with Jon Mess (co-vocals), Zachary Garren (guitar) and Eric Lodge (bass) outside Sargent’s House of Coffee on Alhambra Blvd. and discussed the forthcoming album and the rift that caused Dance Gavin Dance and original singer Johnny Craig to part ways.

Do you have a bunch of songs done already?
ZG: We have nine so far. We’re going to finish up the ninth one today.

How has the writing gone for the new album now that you have a new vocalist?
EL: We kind of write without our vocalists in mind. We like to incorporate parts for our vocalists, but like, it’s just the people in the band who play the instruments who do the writing, so it’s not really affected by the vocals or anything. So far it’s been going really good. We’ve been progressing pretty steadily. We’re really stoked on the new stuff.

How would you say you’re progressing? Which direction do you see the songwriting heading?
ZG: It’s more groovy.
EL: Each song is tackling a different genre or sub-genre, I guess you would say. But yeah, it’s definitely more groovy, more energetic.
JM: There’s a lot of different types of sounds.
EL: But it still sounds like it’s us. It still sounds like you’re listening to Dance Gavin Dance.

Jon, you’re one of the vocalists. Lyrically, how is the writing going for you? Have you written a lot of the lyrics yet?
JM: Yeah, I’ve got about five songs done. It’s cool. I don’t know how it’s going to end up, but I think it’s going to be a lot better than how I collaborated with our old singer. It’s a lot more coordinated, a lot more thought out. Vocally, I think it’s a little more together.

With Jonny leaving the band, it didn’t seem like a very neat breakup.
JM: There was definitely some drama there, yeah.

Why did you guys part ways?
JM: We just couldn’t get along with him at all. No one in the band liked being around him.
ZG: No one outside of the band even liked him.
EL: Ever since we started the band, we knew that we didn’t get along. We tried so hard–literally, so damn hard–for two and a half years. It just got to the point that the band was going to be done if we didn’t do something about it.
JM: It was affecting everyone to the point where no one wanted to be in the band at all, because of the way he was bringing everything down.
ZG: The way he was acting, his attitude…

I’ve heard the tracks that you guys recorded when Jonny was the vocalist. It’s a really aggressive sound. Did that animosity sort of fuel the fire at all?
EL: I think it more just motivated us. Like, we’ve got to write the best record that we can and show everyone what’s up. The aggression–I don’t know where that comes from.

Kurt’s the new vocalist, but was there ever an inclination to just continue with Jon as the sole vocalist–especially after your last experience?

JM: It was an idea, but that would be very much changing… Well, you’d have to change the music. It would just really change the whole band in a way. It would be hard to keep growing in terms of popularity and touring and whatnot. Because then we wouldn’t be able to play our old songs. I don’t sing like him at all. We needed someone who’d be able to sing the old songs. I can’t sing the old songs, and none of us could, so we just threw that idea out the window and didn’t discuss it any further. And I don’t know if any of us wanted to be in a band that was all heavy screaming and whatnot.

Before you were mentioning that the stuff you’ve been writing has been really groovy, and that’s the one thing that jumped out at me listening to the songs with Johnny’s vocals had a really R&B vibe to it. Is that something you’re trying to amplify more with the newer stuff?
ZG: I think that’s just Will [Swan, guitar]. He’s black. He said he’s been channeling his black side.
JM: There is a song that doesn’t have a name, and it’s called “R&B Song.”
EL: We have another new song that’s going to have a big dance crescendo.
ZG: I think we all sort of like that stuff anyway. 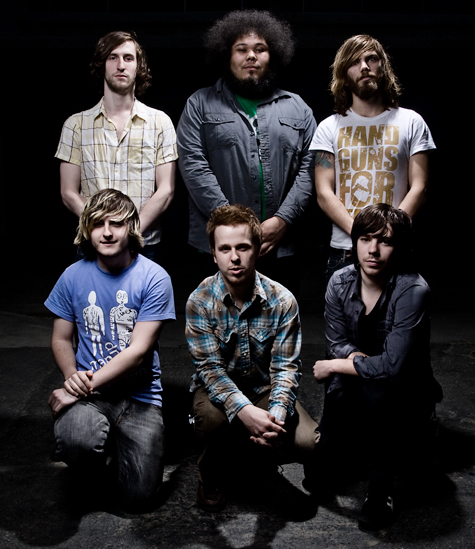 How long did you search for a new vocalist?
ZG: About a month I think.
EL: We knew about Kurt [Travis, formerly of Five Minute Ride], obviously. The day after it happened, we saw Kurt as an option. Our manager, Kurt is like his baby boy. Our manager said, “You know there’s Kurt.” We tried a couple people out, but none of them could come close to what Kurt could do, so it was a pretty simple decision.

Given the tumultuous history with your last singer, was Kurt someone you’d considered replacing Jonny with before?
ZG: I do remember once we’d discussed it.
JM: It was considered. We got to the point where we decided that it was better to do it now than have it happen on the road. But honestly, we didn’t kick him out. He quit, and then he wanted to come back; and that happened a lot. He would quit and then the next day he would say he was just kidding or something. This time, he did a series of events that were a big deal, and he quit, and we just said, “Fine, man. See you later.” A lot of people are saying, “You guys are so stupid. You kicked out your singer.” Well, he left the band, and we just said, “OK.” We didn’t argue. Maybe it was just a mutual thing. Then he wanted to come back. I don’t know. He was a little out of his mind.

Do you have a title for the album yet?
ZG: It’s sort of up in the air.
JM: I sort of wanted to have an end of the world type theme.

Does that fit with the lyrics you’ve been writing?
JM: I don’t know…
EL: We were going to have four-part songs about these paintings Jon had done [laughs].
JM: We have a bunch of ideas. We don’t know which ideas will come into fruition or whatever.
EL: It could be anything–continuing part threes and part fours maybe from our EP. Kind of like movies: sequel!

A sort of concept album?
EL: Yeah, but not a full concept album. Like some parts will be a concept, but it’s kind of random. We’re still working out the details.
JM: Or maybe it’s just a huge hype gimmick. There’s going to be a new CD, you like the first two, so maybe you’ll like the third part.

Also check out our interview with Will Swan from Dance Gavin Dance (June, 2009)

Also check out our interview with Jonny Craig (Dec, 2009) 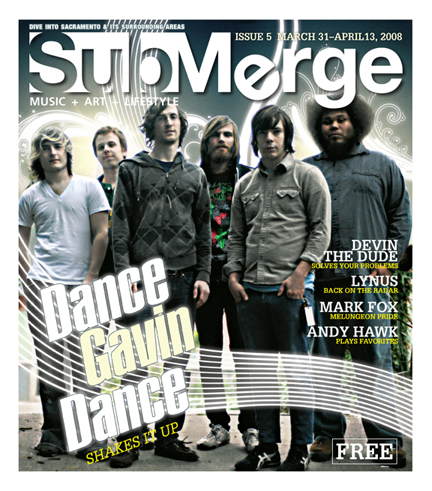