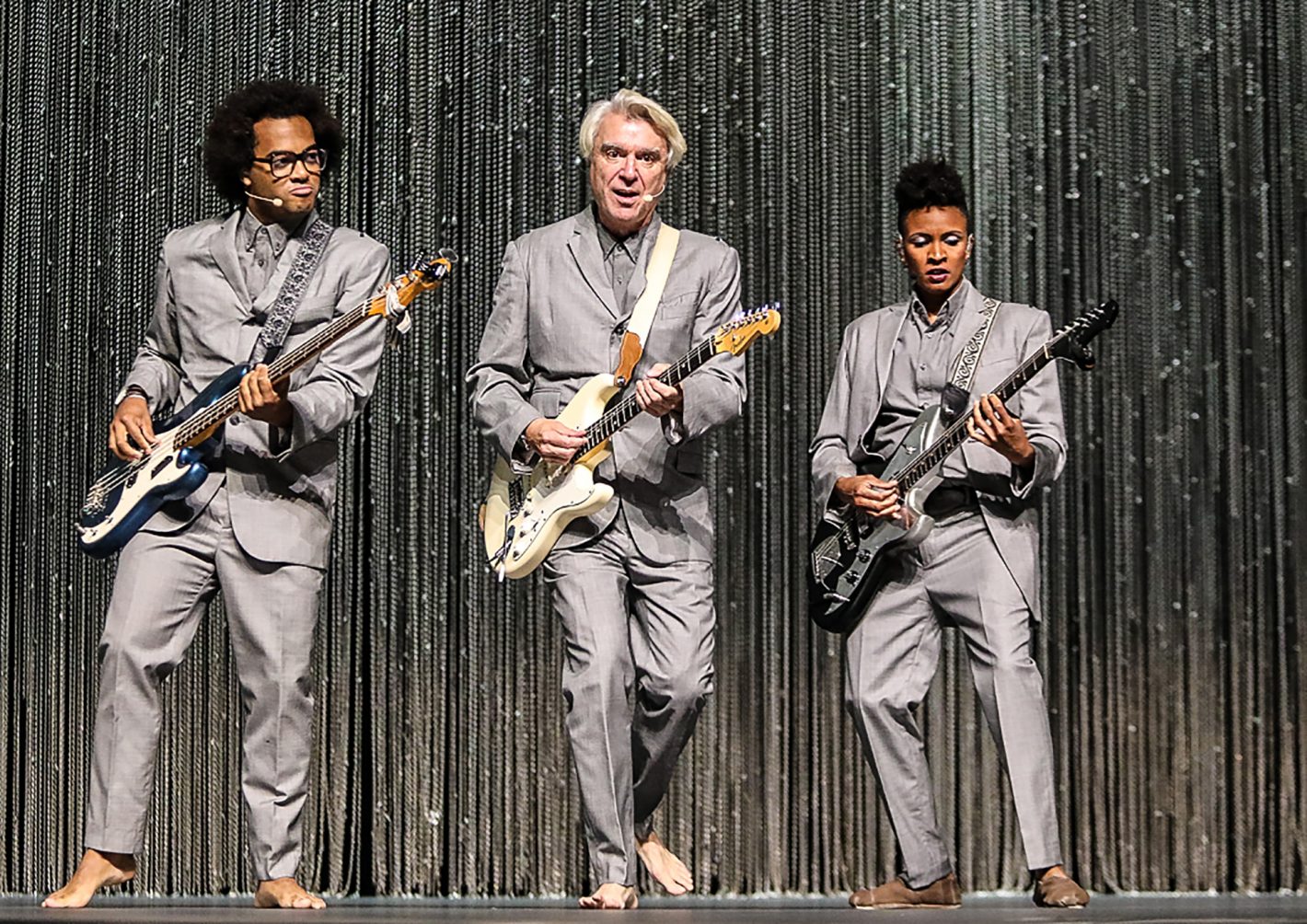 On the day of his phenomenal recent show in Sacramento, former Talking Heads frontman David Byrne posted the following message on Facebook: “Sacramento! I’ll be playing the Sacramento Community Center Theater tonight, and while I’m in town, I’d love to hear your Reasons To Be Cheerful.”

Byrne cited an increase in student housing near Sac State that will reduce commutes and issues with traffic and parking. He asked for local initiatives in climate, science and transportation and stories of civic engagement and local culture that make people smile.

The legendary artist was reaching out for reasons to be positive in spite of the political strife and environmental erosion that is happening all around us. That’s been an ongoing theme of his American Utopia tour. Mind you, this was on the same day that the news of the Michael Cohen guilty plea and Paul Manafort conviction broke and were clogging most news feeds.

Locals responded to Byrne’s post enthusiastically, sharing the recent civic artistic success of the Wide Open Walls mural project. Others posted about the city’s farm-to-fork prowess. However, the most common responses involved Sacramento’s strong bicycle culture with mentions of our own beautiful bike trails, Bike Party group rides and the ease of bicycle commuting.

It’s safe to say this may have resounded with Byrne, who has been a big advocate of biking in New York City for the last 30 years. About 10 years ago he began designing artistic, functional bike racks around Brooklyn and Manhattan and has since presided on commissions giving other artists the opportunity to spread more works around the Big Apple. 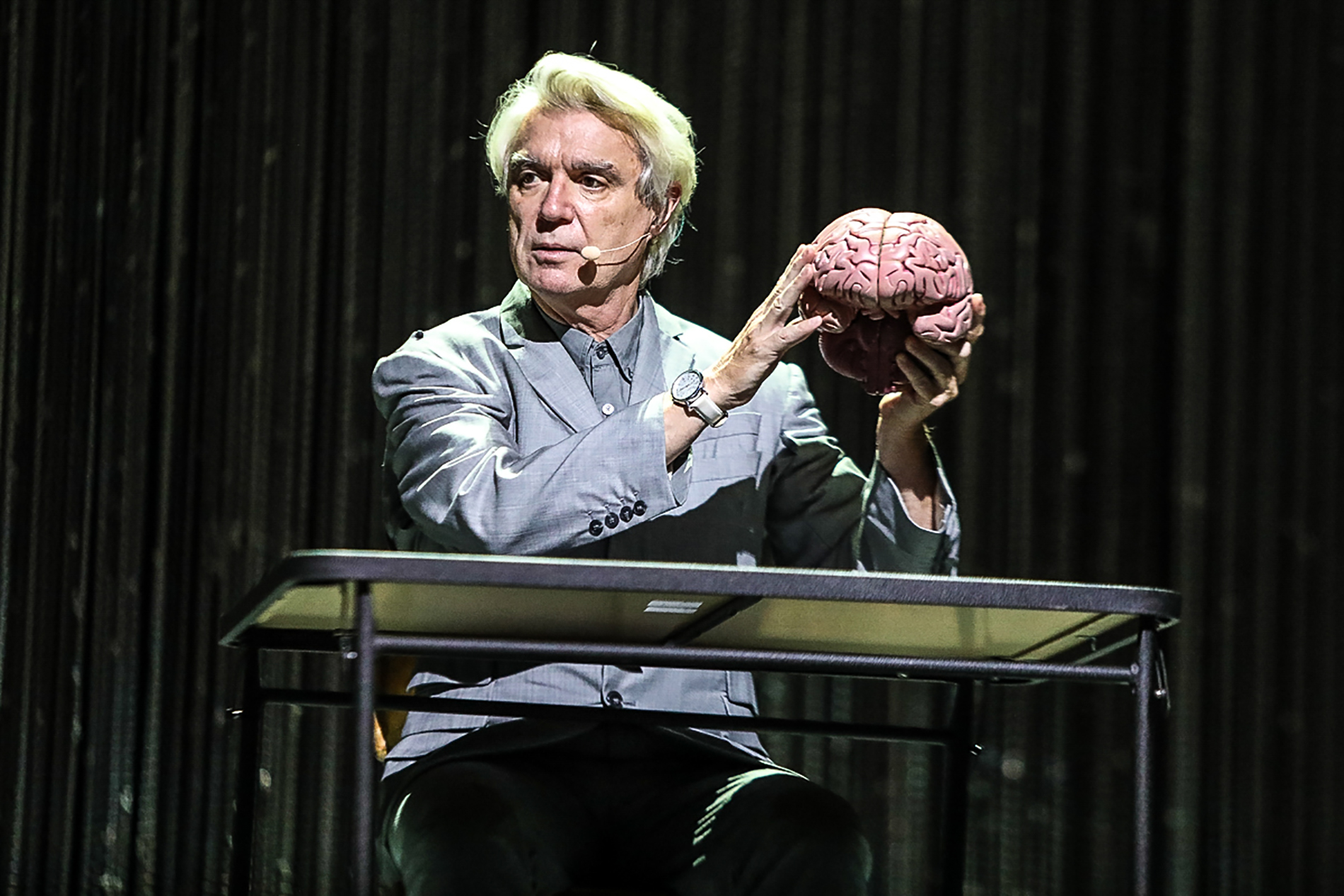 Byrne is a true renaissance man. He’s also a restless genius. He’s an author, has worked in TV, film, art, theater and has played or produced music in numerous artist collaborations. He recently released American Utopia, which is his first solo album in 14 years.

Byrne and Brian Eno, who co-wrote most of American Utopia, aren’t afraid to change things up and challenge concert norms. The record touches on the ills of the world around us, but pushes back against the rampant cynicism with which most respond to it.

The show’s staging, according to Byrne, was in part inspired by Chance the Rapper and Kendrick Lamar and what those two have done with the aesthetic of their recent live sets. 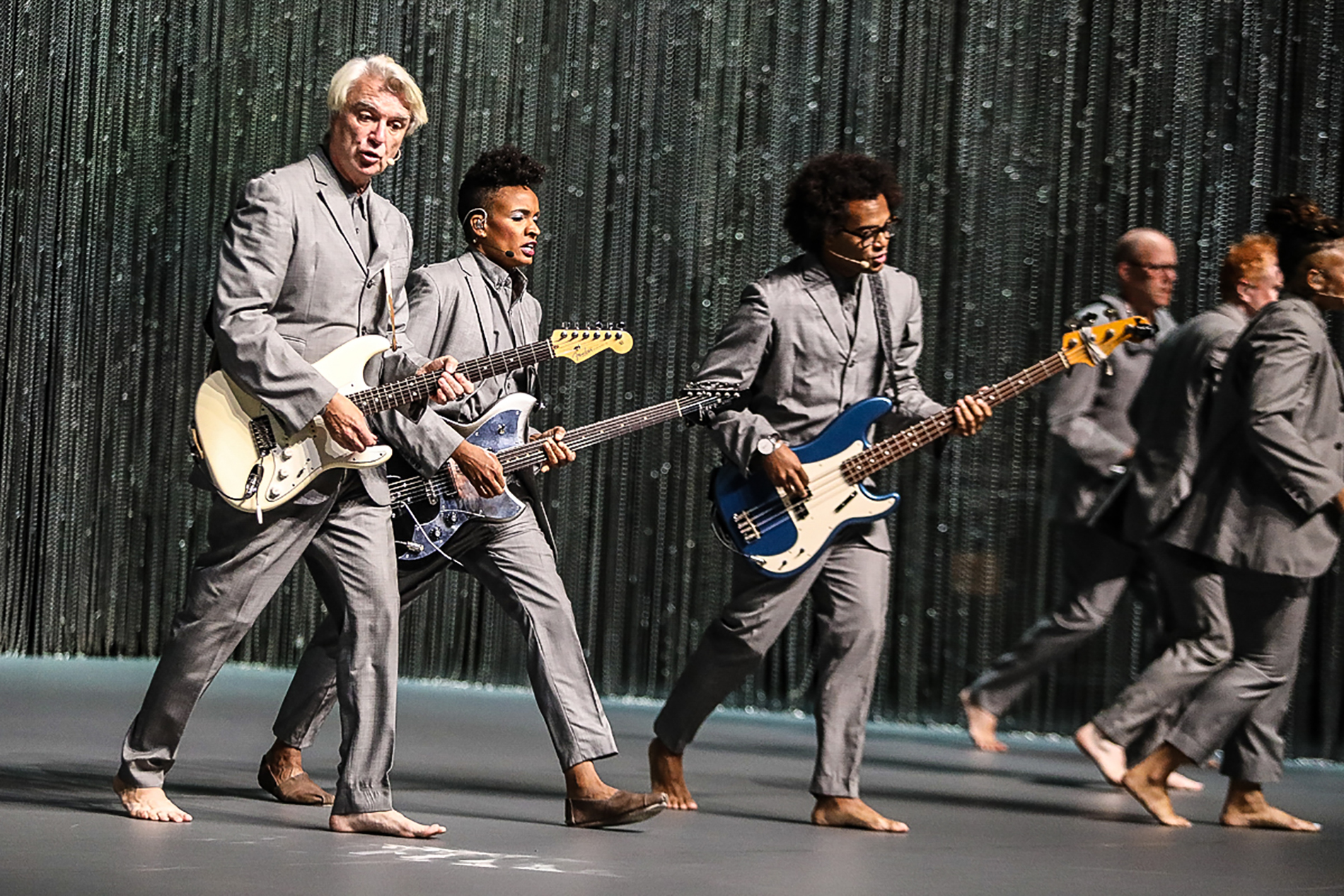 The resulting tour has been Byrne’s most ambitious production since the legendary Talking Heads Stop Making Sense Tour in the mid-1980s. The American Utopia Tour is big, but it’s also uniquely scaled down with a theatrical feel. There is nothing on stage. No amplifiers. No music stands. No risers. No keyboards. Nothing. Just the mostly barefoot musicians and their wireless instruments hanging from their torsos.

The stage was framed like an empty black box with beaded LED lights hanging to create the shape. Each song had a different feel. Byrne would walk to the side of the stage and an arm would hand him a guitar. A single, head-high light on a lamp stand was brought to the middle of the stage for one song, while a single floor light was placed at the front of the stage for another, creating giant shadows of Byrne, then the other band members as they moved near him.

It was an amazing achievement of sparseness, movement, light and beauty.

The setlist for this show was a seamless blend of old and new that showed us an amazing imaginative performance from the 66-year-old visionary. A dozen musicians—six drummers, a bassist, a guitarist, a keyboardist and three vocalists—all shared the stage with constant movement and flawless choreography that flowed smoothly between marches, ballet and jazzy improvisation with touches of hip-hop. 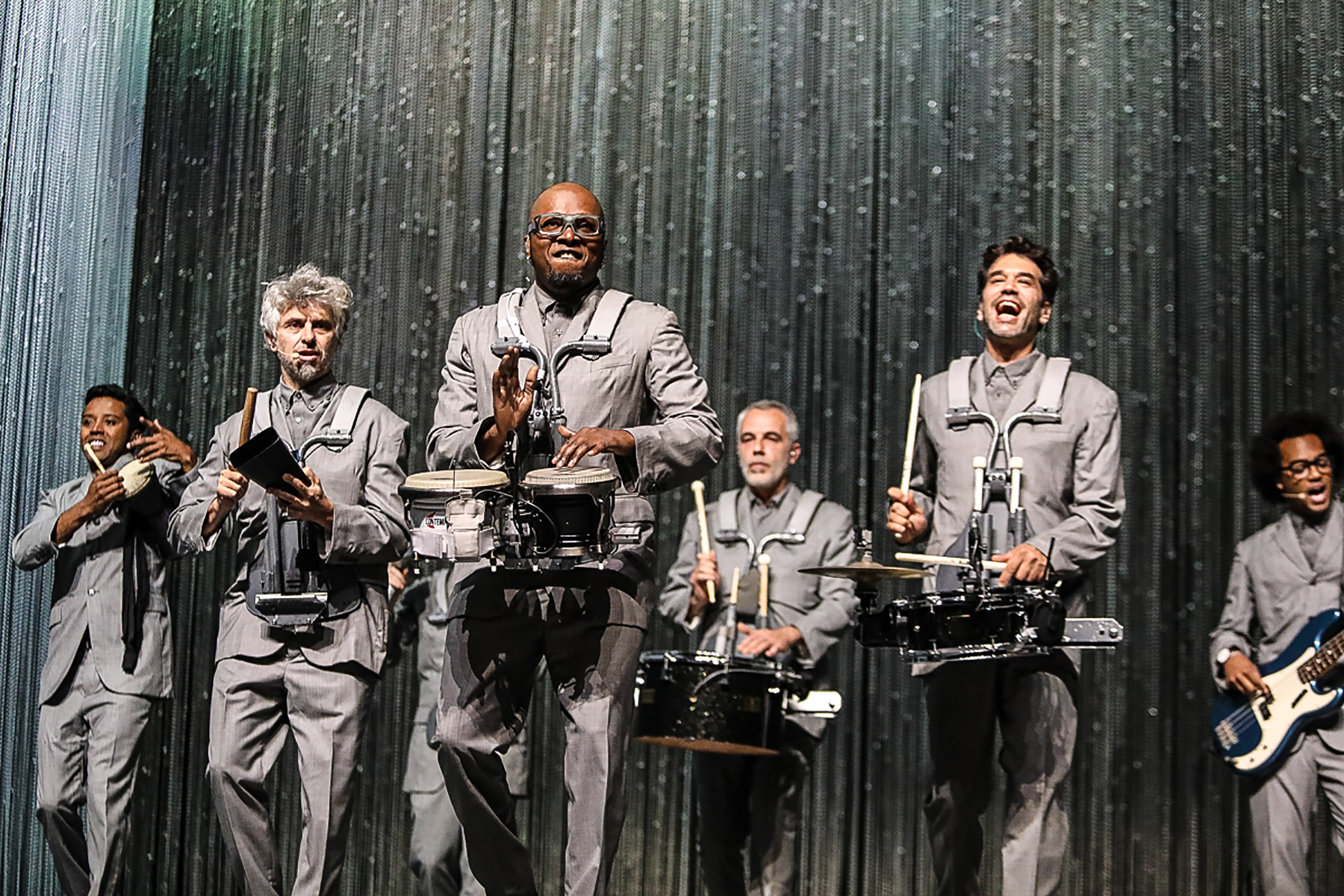 Watching a man of Byrne’s years throw himself into these songs with such agility and grace while singing and often playing guitar was quite an inspiring feat of endurance, especially since he was among a cadre of incredible musicians and dancers, many of whom were likely half his age. Byrne moved with verve and glided along the floor effortlessly while all of the chaotic and beautiful choreography unfolded around him. He did an epic backbend at one point and later rolled down to the ground and back up again with a light snap.

The pace was lively all night as Byrne led the group through a setlist that mixed reinterpretations of Talking Heads classics with the provocative new material and a smattering of solo work. The crowd was dancing hard throughout all of the uptempo numbers and taking it all in during the slower tunes.

The band ended an 18-song set with a smokin’ rendition of “Burning Down the House” and exited the stage briefly before reappearing and jumping into “Here Lies Love.” This was a song from the rock opera that Byrne co-authored with Fatboy Slim. The quirky opera follows the life of former first lady of the Philippines, Imelda Marcos, and the song reignited the dance party for the Community Center crowd. The band followed this with a rocking version of the Talking Heads song “The Great Curve,” and exited the stage once more.

Byrne and company reemerged once again to finish with Janelle Monae’s stirring 2015 protest song “Hell You Talmbout,” a call to never forget recent black and brown victims of police brutality. “Sadly it’s still relevant today, and with her blessing we’ve continued to update it,” said Byrne. 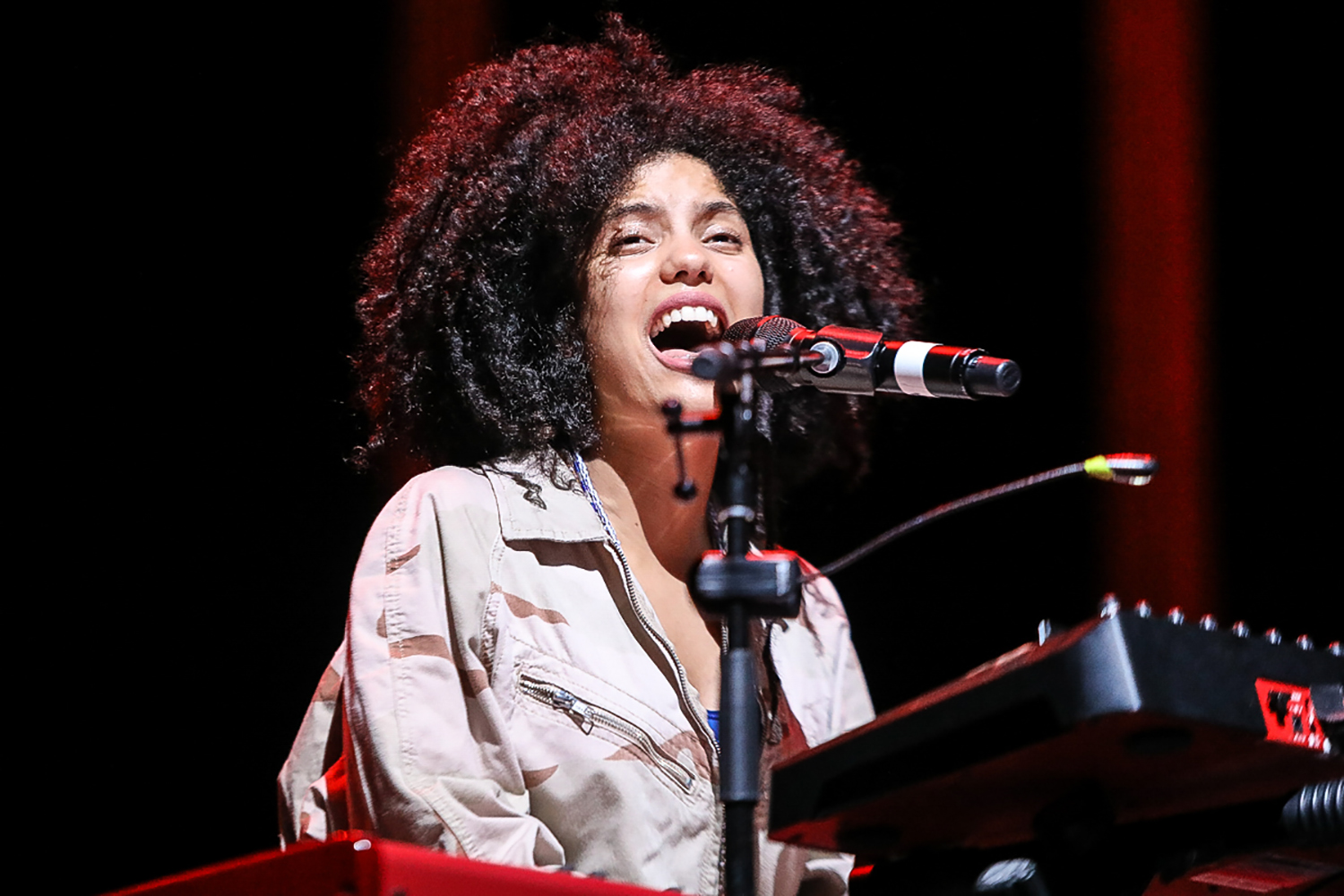 Byrne, his bandmates, and the members of Ibeyi, the fantastic opening duo, reminded the audience of each victim by chanting their names in a call and response with the audience. This had quite an emotional impact, rewiring the feeling at the end of the show to one of urgency. When Byrne repeatedly called out Stephon Clark’s name near the end of the song, the audience roared it back to the urgent beat of the drums. It was a reawakening of consciousness at the end of an evening of joyous and playful music.

Walking into the night afterward, concertgoers exuberantly reminisced about the weaving marching dancers, beautiful stage production and social awareness of this thought-provoking performance. All of these were reasons to be cheerful about the brilliance of Byrne and the open hearted way in which he had just shared with us. 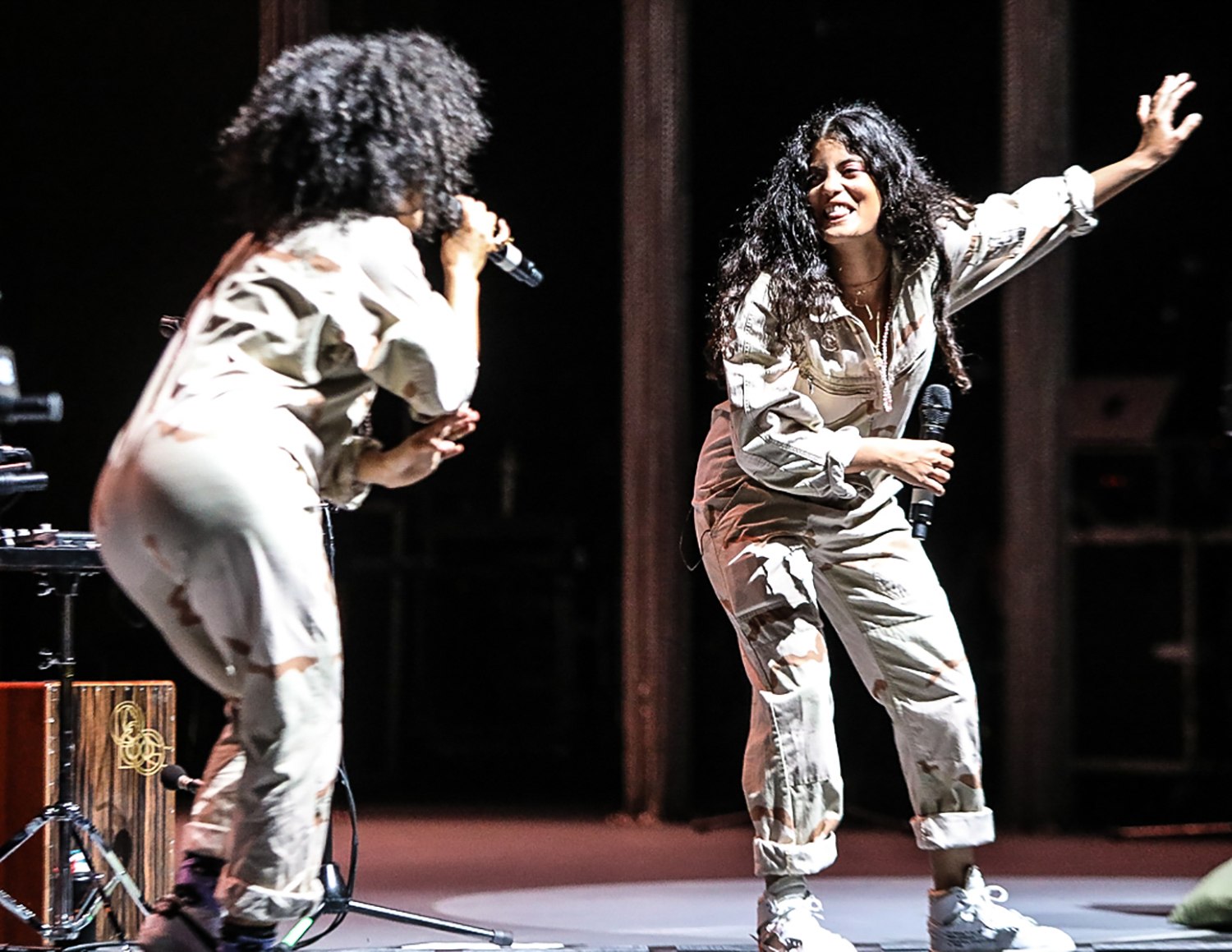